The US shale revolution and the rising shale oil production have had a seismic impact on the global oil market contributing in no small measure to the steep decline in crude oil prices since July 2014. Equally US liquefied natural gas (LNG) exports could have a similar impact on the global gas market possibly weakening further current low gas prices. The irony, however, is that without relatively higher gas prices, the potential and prospects of sizeable US LNG exports could be restricted. 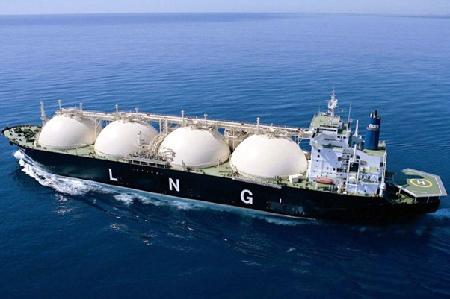 In 2008 the United States overtook Russia to become the leading natural gas producer in the world. Just a few years ago the US was expected to be a major importer of natural gas. The shale revolution has virtually reversed that trend and enabled the US to start exporting LNG.

In a world of low energy prices, the cost of shipping LNG from the United States to Europe or Asia is prohibitively expensive. Countries such as Qatar, Algeria and Norway can export LNG to Europe at a much-reduced cost, pricing the United States out of the market. In Asia, Australia, Malaysia, Brunei and Indonesia export LNG at prices the United States can’t match, at least for spot exports and short-term contracts.

The plunge in oil prices since the summer of 2014 has dragged down the value of LNG, which is mostly sold on oil-linked contracts, and dampened the excitement over US exports. The economics of shipping gas from the US was compelling three years ago, but is now marginal. Deteriorating market conditions have put the brake on any new investments in US LNG.

Major Hurdles to US LNG Exports

Future US LNG exports will face stiff competition from leading exporters of LNG in the world, namely Qatar, Russia and Australia.

Qatar has the distinction of being the world’s largest LNG exporter, accounting for 32% of global LNG exports, the third largest proven reserves of natural gas in the world amounting to 24.5 trillion cubic metres and the lowest production costs of LNG in the globe. Qatar’s LNG accounts for 80% of all LNG exports to Asia. Japan, South Korea, India and China are the main importers of Qatar’s LNG.

In Asia, Qatar faces challenges from Australia and eventually the United States. Australia is the biggest rival in the Asian market and will likely continue to be so. In 2014, Qatar exported 77.4 million tons of LNG while Australia exported 20.8 million tons.

As the world’s lowest-cost producer of LNG, Qatar may be more able to withstand lower prices than many of the new supply points coming online. Still, Qatar faces diminished market share and the possibility of lower prices.

When it comes to attempting to undermine Russia’s pipeline exports to Europe, the United States is at a disadvantage. Natural gas transportation by pipeline is significantly cheaper in most cases than building and employing expensive LNG port infrastructure. In terms of natural gas production and distribution, Russia’s operating costs are low and their export infrastructure is already built. Some of Russia’s most important markets, including those in Central Europe, already have spot prices around $6.60 per one million British thermal units (mmBtu).

While Qatar will continue to be one of the world’s largest producers and exporters of LNG well into the future, Australia could overtake Qatar to become the world’s largest exporter of LNG by 2020. Against Qatar’s 77 million tonnes of LNG production capacity, Australia will have 85 million tonnes by the end of this decade, and by the mid-2020s the US may have built a production capacity of 50 mil­lion tonnes or more.

Plunging global oil prices may turn hopes for cheap LNG supplies from the United States into a costly disappointment for Asian buyers. The steep slide in crude oil prices since June 2014 has exposed cracks in the assumption by Japan and other Asian buyers that cheap US LNG would muscle into high-value Asian energy markets from 2016. The oil price drop has raised the possibility that some US Gulf Coast LNG export plants may be mothballed before they ever get a chance to supply world markets.

When Brent crude was selling at $100/barrel, oil-linked natural gas contracts typically would translate to around $12 per mmBtu, giving US LNG a big price advantage. This advantage has disappeared with the recent decline in crude oil prices. With crude at $55/barrel, LNG indexes to $6.6 per mmBtu. US LNG producers have been targeting prices of $11 or $12 per mmBtu to be profitable.

A total of 164 billion cubic meters (bcm) of additional LNG export capacity will be operational glob­ally by 2020, adding 40% to current levels according to forecasts by the International Energy Agency (IEA). Australia will add 44% of the new supply, becoming the world’s largest LNG exporter by the end of the decade. The US will be the second-largest contributor, adding 35% of the new capacity, ranking third as an exporter behind Australia and Qatar. As the gas gushes, Asia’s LNG market is being transformed.

Today, buyers have a choice. They can buy LNG at an oil-linked price or at a Henry Hub-linked price or on a European gas-based price. Prices at the Henry Hub, a storage and delivery point in Louisiana, are considered the benchmark for all US natural-gas pricing.

Existing contracts coming out of the United States are based on Henry Hub spot prices index pricing US LNG for Europe at anywhere from $8 to $10 per mmBtu. In short, the United States can’t compete with Russia’s gas exports to Europe.

The same disadvantages the United States faces in Europe also apply to Asia. LNG prices in South Korea, China and Japan are about the same as they are in Europe, only the cost of shipping is more because of the longer distances involved. With new LNG export capacity coming online in Australia, the United States has to compete with projects that are as capital- intensive but closer to their export markets.

US Scale of Influence

Whilst the United States does not threaten Russia’s market share in Europe or Qatar’s or Australia’s in Asia, the potential for US LNG exports does improve Europe’s leverage against Russia by providing an alternative source to draw from. Moreover, it helps create an LNG price ceiling when negotiating with Russia or other suppliers of natural gas. In time, the growth of North American LNG will force price of new sources of natural gas.

The exact scale of US LNG exports is unclear and largely dependent on price. Most likely exports will be in the order of 50 bcm annually, a sizeable addition to the global LNG supply. In addition, between now and 2020, the United States and Australia alone could add as much as 150 bcm of LNG to a global market that was estimated in 2015 at 3469 bcm. Russia and other major LNG suppliers still have a few years to secure markets and undermine potential US LNG contracts by offering lower prices.

Whilst the United States does not threaten Russia’s market share in Europe or eventually Qatar’s or Australia’s in Asia, future US LNG exports will have a positive impact on the US economy and will significantly help hold  down energy costs for consumers around the world. They will also improve Europe’s economic and geopolitical leverage when negotiating new deals with Russia.

Moreover, US LNG exports will help create an LNG price ceiling globally exactly as shale oil has created a price ceiling for OPEC oil and will also provide tough competition for anyone hoping to build rival LNG plants as those proposed in east Africa, the west of Canada or Russia.