HOME / VIEWS ON ENERGY NEWS / WHY IS THE OIL PRICE IGNORING ALL THE BULLISH SIGNS?

Why Is the Oil Price Ignoring All the Bullish Signs?

Despite very positive signs in the global oil market, oil prices have never managed to break through the $60/barrel barrier since the OPEC production cuts were implemented in January 2017. On the contrary, they have declined from $57/barrel two weeks ago to just over $50/barrel today. 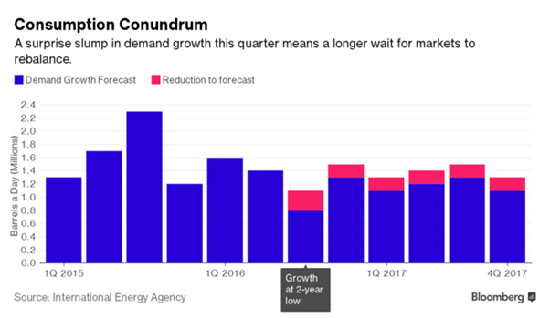 On the face of it, this could be due to two factors: one is rising Shale oil production and the second is that the glut in the global oil market might have been bigger than what was previously estimated. But circumstantial evidence suggests there could be a third factor, namely concerted efforts by the International Energy Agency (IEA), BP through its annual Statistical Review of world energy, the US Energy Information Administration (EIA) and the Financial Times (FT) to prevent the oil price breaking through the $60/barrel barrier. The rationale is that a price under $60/barrel is good enough for US shale oil production to breakeven and not high enough to slow global economic growth. Let us analyse these three factors to find out where the truth lies.

If oil prices continue to rise, US shale oil producers will ramp up output, in effect capping the oil price. This raises the prospects of a new trading zone for crude oil within a narrow band of OPEC’s price floor of $50/barrel and US shale price ceiling of $60/barrel.

However, US shale oil production could only add 300,000-900,000 barrels a day (b/d) to the current production of 8.77 million barrels a day (mbd) in the next few years if oil prices rise above $60/barrel. Another issue for the US shale oil industry is the rising costs of drilling and fracking new wells which are projected to rise by 20% this year. In real terms, this means that the new breakeven price for new shale wells could rise by $10-$12 a barrel from $50-$60 to $60-$72/barrel.

The second factor is glut. Experts previously estimated the glut between 1.5 mbd and 2 mbd. It is possible that they may have got it wrong and the glut was actually higher than that. Still, current oil market fundamentals are positive enough to easily support an oil price of $60-$70/barrel. So why is the price failing to break through the $60/barrel barrier.

This brings us to the third factor. Circumstantial evidence suggests some sort of concerted efforts by IEA, BP, EIA and the FT to prevent the oil price breaking through the $60/barrel barrier.

The above mentioned bodies are four of a kind. They represent the major consumers of oil (particularly western consumers) and, therefore, have a tendency to exaggerate global oil reserves, production and discoveries, US shale oil production increases and reduce global demand for oil in a blatant attempt to intimidate the oil price. Examples are abound.

The minute the oil price looks as if it is going to break through the $60/barrel barrier, one or all of them in synchrony give what appears to be innocuous projections on reserve additions or the longevity of the glut or additions to the US oil stocks thus dampening the rise of the oil price. As expected, these statements or projections are eagerly reported by their mouthpiece, the Financial Times.

Two weeks ago when the oil price reached $57/barrel and was heading towards $60/barrel, the IEA made two statements: one warning that the glut will continue into 2017 as ballooning stocks prevent a recovery in prices and the other is that the global demand for oil is projected to decline to 1.3 mbd in 2017 instead of its original forecast of 1.4 mbd. These statements could not have been a coincidence.

And as if this is not enough, BP comes forward with a timely statement about US shale oil production rises offsetting the impact of OPEC production cuts or talking about a significant increase in global proven oil reserves. BP has a history of making such claims. In its 2015 issue of Statistical Review of World Energy, BP claimed that the United States has overtaken both Saudi Arabia and Russia in 2014 to emerge as the world’s top crude oil producer when, in fact, US oil production was estimated at 9.3 mbd compared with 10.11 mbd for Russia and 10.19 mbd for Saudi Arabia.

Any sign of the oil price heading towards $60 prompts the EIA to claim a huge addition of a few million barrels to US oil stocks. An addition to stocks could only happen in two ways. One if the United States is producing far beyond its oil needs. This is not the case otherwise it will not be importing between 7-8 mbd. The other is that the US is importing so much thus increasing its stocks. If this is the case, then the demand for imports should push the price up. Still, oil prices have been hovering around $51-$57/barrel.

Still, it is a matter of time when the oil price breaks through the $60/barrel barrier and go all the way towards $70/barrel this year supported by bullish signs such as a projected growth in global oil demand by 1.5% or of 1.4 mbd in 2017 and an estimated global economic growth of 3.5% in 2017 from 3.2% in 2016 according to projections by the International Monetary Fund (IMF). In addition, China’s oil imports in 2017 are projected to rise by 5.3% to between 9-10 mbd.