HOME / VIEWS ON ENERGY NEWS / A TALE OF TWO WARS: A MACROECONOMIC ASSESSMENT

A Tale of Two Wars: A Macroeconomic Assessment

Almost seventeen years ago, a group of neoconservative hawks among them John Bolton, President Trump’s current national security adviser, persuaded President George W. Bush to mount a quick invasion of Iraq because, they alleged, it had “weapons of mass destruction.” That decision, based on dubious intelligence and taken against the advice of many of America’s closest allies, triggered a huge refugee crisis, destabilized the entire Middle East and cost the global economy an estimated $12.584 trillion of which the US economy’s share was $6.52 trillion according to a research paper titled: ”The Oil ’Price Rise’ Factor in the Iraq War: A Macroeconomic Assessment” I wrote and was published by the United States Association for Energy Economics (USAEE) on the 4th of June 2008.  Moreover, nearly 5,000 Americans lost their lives in Iraq with hundreds of thousands more injured and receiving lifetime disability compensation.

I was probably the first oil expert to assess the macroeconomic costs of the invasion of Iraq and my paper became a source of information quoted by governments, the press and organizations around the world.

In the weeks before the war, Larry Lindsey, the then head of President Bush’s National Economic Council, claimed that “the successful prosecution of the war would be good for the US economy”. A key reason for this claim was the belief that it would keep oil prices low. The Wall Street Journal editorial that same day argued, “The best way to keep oil prices in check is a short, successful war on Iraq”.

The United States went to war in Iraq because it wanted to get an assured supply of inexpensive oil for itself and its oil companies. I have argued in my book (Over a Barrel, 2004, p.191) that the invasion of Iraq in 2003 was undoubtedly about oil. Even the veteran ex-chairman of the US Federal Bank Alan Greenspan has admitted in his memoirs (The Age of Turbulence, 2007, page 463) that the Iraq war was largely about oil.

There are other reasons that have caused many around the world to conclude that oil was the underlying motive for the war. When America went into Iraq, it went to great efforts to protect Iraq’s oil assets even as it failed to protect Iraq’s priceless antiquities, or (even more surprising from a military perspective) munitions supply. Moreover, while the weapons of mass destruction were put forward as the war’s rationale, there was another country that was truly threatening then to develop weapons of mass destruction: North Korea. But North Korea did not have oil and therefore it was not invaded. While America was focusing its attention on Iraq, North Korea became a nuclear power.

The war’s scenario was from the start to invade Iraq and seize its oilfields, pump oil like crazy and, in so doing, help solve the United States’ energy crisis for a few decades and also destroy OPEC once for all.

America plunged headlong into the Iraq war with hopes of obtaining large quantities of cheap oil but those dreams were quickly crushed when crude oil prices spiked from $25 a barrel at the onset of the hostilities to upwards of $130 in mid-2008. Nobel-winning economist Professor Joseph Stiglitz saw a direct link between the great recession of 2008 and the oil price hike.

And despite winning the military battles because of its overwhelming force, the United States lost the war. The real winners were China in terms of emerging as the world’s largest investor in Iraq’s oil industry without even firing a shot and Iran in terms of its intrusive political influence on Iraq.

Lessons from the Iraq War

Table 1
Global Macroeconomic Costs of the War on Iraq
($ bn)

Despite the staggering costs, some hawks, John Bolton among them, are again urging the United States to go to war with Iran thus plunging the Gulf region in a destructive war which could cost the global economy far more than the invasion of Iraq and leave the Gulf countries’ economies in tatters. Furthermore, such a war would destroy forever US national interests in the Gulf region and would strengthen the most virulently anti-American elements of Iranian society and suppress those who favour détente.

A War with Iran?

But despite scheming by John Bolton, war is neither an option for Iran nor for the United States.

Still, a war could happen by accident rather than by design. Iran, for example, may see the US naval build-up in the region partly as bluster and partly as an effort at intimidation in what it sees as its own backyard - intimidation that it is not disposed to accept.

However, there is a real danger that if attacked or if its crude oil exports were prevented from passing through the Strait of Hormuz, Iran could block or mine the Strait of Hormuz so as to disrupt other Gulf countries’ oil exports. Moreover, it could launch a kind of hybrid war – both directly and through its proxies – carrying out sporadic and widely dispersed attacks on shipping and other targets pushing oil prices, shipping costs and insurance premiums steeply up and perhaps encouraging further punitive responses.

A blocking of the Strait of Hormuz would inflict great damage on the economies of the Gulf Cooperation Council Countries (GCC). Through this most vital chokepoint in the world, more than 19 million barrels per day (mbd) of oil traffic, a fifth of the global oil trade and a third of global LNG supplies, pass every day (see Map 1).

Map 1
The Strait of Hormuz 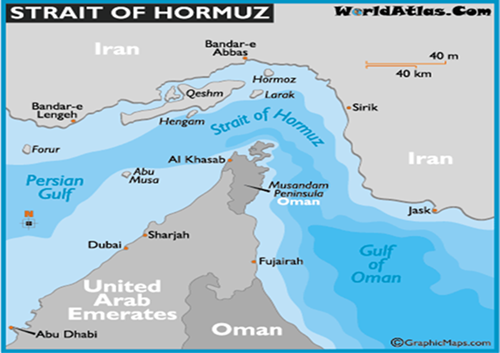 Oil exports from Iraq, Iran, Kuwait, Bahrain, Qatar (including large volumes of Qatari LNG exports), the UAE and Saudi Arabia must pass through the Strait.

Costs of a War with Iran

A war in the Gulf could cost the global economy far more than the invasion of Iraq. The reason is the fact that Iran’s land area is almost four times that of Iraq and its population is more than double Iraq’s, also the many countries that could be sucked into the war, the damage to oil installations in Saudi Arabia, UAE and Iran, the cost to the global economy of disrupting 19 mbd from passing through the Strait of Hormuz even for one month, the loss of oil and LNG revenues and the collateral damage to the Gulf countries’ economies (see Table 2).

Table 2
Estimated Macroeconomic Costs of a War on Iran
($bn)

Source: Dr Mamdouh G Salameh’s estimates based on a rise of the oil price to $130 a barrel, a closure of the Strait of Hormuz for one month and current daily oil exports by the Gulf countries and also Qatar’s LNG exports.

The additional costs of a war on Iran would amount to $553 bn bringing total estimated cost of the war to $13.137 trillion.

Yet, a blood-thirsty hawk like John Bolton wouldn’t mind or care if the global economy lost an estimated $13 trillion as long as he gets his war. Wouldn’t be far less costly to remove him from his position of authority?

Wouldn’t also be more logical for President Trump who is reported by the former British Ambassador to the United States to have walked away from the Iran nuclear deal just to spite his predecessor former President Barack Obama, to re-join the nuclear deal, lift sanctions on Iran and negotiate with it on whatever grievances he may have on the deal. In so doing, he would save the world and the global economy huge economic and human tragedies. He will also be the toast of the world and a possible Nobel peace prize winner even without lobbying by Japan on his behalf.