US President Trump broke all norms of diplomacy and protocol during the NATO meeting in Brussels on the 11th of July 2018, when he accused Germany of being “a captive of the Russians” because of its dependence on Russian energy supplies. He went on to say that “Germany is totally controlled by Russia because they will be getting 60-70% of their energy from Russia and a new pipeline”.

He was, of course, referring to the jointly European and Russian-financed Nord Stream 2 gas pipeline that would deliver a total of 110 billion cubic metres per year of Russian gas supplies under the Baltic Sea, to Germany and the European Union (EU) thus bypassing the Ukraine. It will be completed by the end of 2019. 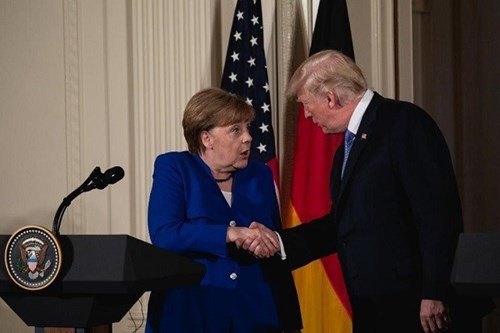 German Chancellor Angela Merkel hit back at President Trump saying Germany makes its own independent decisions and denying his claim that her country was “totally controlled” by Russia. In less blunt language than the US president’s, the German chancellor made the point that she needed no lessons in dealing with authoritarian regimes, recalling she had been brought up in East Germany when it had been part of the Soviet Union’s sphere of influence.

The US has always been opposed to Nord Stream 2, partly because it will tighten Russia’s grip on Europe’s energy supplies but mostly because of self-interest. Many in the EU have accused the United States of trying to replace Russian piped gas supplies with US LNG. Bloomberg reported how German lawmakers mocked President Trump’s comments on Nord Steam 2, saying that he was looking for ways to ensure markets for US LNG, and felt that Nord Steam 2 interfered with these plans.

According to the Wall Street Journal (WSJ), President Trump reportedly told German Chancellor Merkel that the US would restart talks with the EU on a trade deal in exchange for Germany cancelling the Nord Stream 2 pipeline. Chancellor Merkel’s answer was to defy Trump and start building its portion of Nord Stream 2 —in its Baltic Sea port of Lubmin.

Germany wants to import more Russian gas as it phases out coal and nuclear power. And a combination of Russian gas and planned liquefied natural gas (LNG) facilities will make Germany an important European gas hub.

With Germany starting to build its portion of the Nord Stream 2 and with the necessary permits from Germany, Sweden and Finland to start the construction of the gas pipeline in the Exclusive Economic Zone (EEZ) of the three countries, the project is unstoppable.

Trump’s antagonism towards Merkel is partly personal, a reaction to her standing up to him and her very evident dislike of him, which she makes little attempt to hide.

Putting geopolitics and political pressure from the United States aside, the Nord Stream 2 is an economic issue first and foremost though it is viewed by the United States, Poland and the Baltic States as tightening Russia’s grip on Europe’s energy supplies. Russia provides roughly 40% of Europe’s gas needs.

Germany’s continued support for Nord Stream 2 and Washington’s failure to make good on its threats to sanction major Russian gas projects are key reasons why Gazprom continues to build pipelines to Europe.

Along Europe’s south eastern flank, Gazprom has also completed the first segment of the Turk Stream pipeline, which will send Russian gas under the Black Sea to Turkey and on to southern Europe. The goal is to prevent Europe from developing alternatives to Russian gas, which gives the Kremlin important political-economic leverage over the continent. It will also consolidate Turkey’s position as the energy hub of Europe.

President Trump is behaving like one thinks he owns the world. He has antagonized the world with his discredited “America first” policy and has so far achieved nothing for America. He has now set his sights on his own allies particularly Germany.

On a personal level, his tweets are the signs of somebody who wants to keep his name in the news. He is purely and simply a narcissistic. On an international level, it is the behavior of a president who is presiding over an indispensable superpower whose indispensability is eroding very fast.

His alienation from both China and Russia is reflected by the deeply rooted fear of the US losing hegemonic status as the “only indispensable superpower”. The indications of the US fear are plenty. From Beijing’s point of view, it is the brewing trade war against China and the United States inability to reconcile itself with the fact that China’s economy is now the world’s largest and that the petro-yuan is starting to undermine the petrodollar which is the core of the US financial system. From Russia’s perspective, it is the Western alliance taking advantage of post-Soviet chaos to push the Western sphere of influence towards the Russian border, his resentment of the Chinese-Russian strategic relationship and most recently the failure of US sanctions against Russia.

If President Trump continues his policy of antagonizing everybody, his legacy will be a global economy hovering on the verge of collapse and possibly a war with China and an America looked upon as a bully and hated by the overwhelming nations of the world.

Interested in becoming an energy manager and make a real impact in the industry? Check out how ESCP's programmes will equip you with the tools you'll need!