HOME / VIEWS ON ENERGY NEWS / HOW DID THE OIL MARKETS JUDGE THE US/NORTH KOREA SUMMIT?

How Did the Oil Markets Judge the US/North Korea Summit?

Oil prices don’t lie. They reflect the true picture in the global oil market from an economic and geopolitical angles. In the aftermath of the historic summit between US President Trump and North Korean Leader Kim Jong Un, oil prices were flat. What does this tell us?

The fact that the oil markets largely ignored the much-anticipated summit could mean that they viewed the summit as all flash with little substance. And though both sides hailed the summit as a breakthrough, there was nothing to show except a declaration pledging to work towards denuclearization with no details about how this is to be achieved. 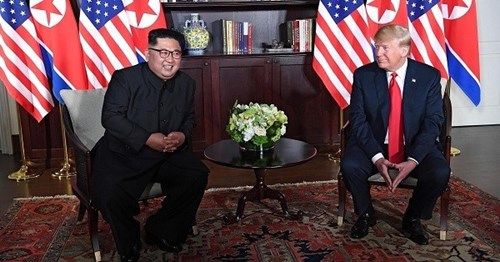 The fact that the oil markets largely ignored the much-anticipated summit could mean that they viewed the summit as all flash with little substance. And though both sides hailed the summit as a breakthrough, there was nothing to show except a declaration pledging to work towards denuclearization with no details about how this is to be achieved.ul Loeb | AFP | Getty Images

The reason that oil was not impressed is that the summit was a golden opportunity for the North Korean leader to bask in the international limelight having met the president of the United States on equal terms. President Trump might get some credit for de-escalating tension between his country and North Korea. But that is all.

US President Trump takes great pride in differentiating himself from his predecessors. By his own telling, he is unique. He has the world’s best mind, memory and negotiating skills. His administration will not make the same mistakes as previous administrations.

From the outset of his presidency, President Trump approached North Korea in just this manner. His summit meeting in Singapore with Kim Jong Un simultaneously offered a resounding if superficial confirmation of the above but also outright refutation of his claims.

On the one hand, holding a summit with the North Korean leader was itself something no previous sitting US president had done. President Trump did it. On the other hand, meeting with Kim Jong Un with no preconditions and with no discernible agreement in place, was not a challenge. In fact, historically, such a direct meeting has been one of Pyongyang’s primary goals ever since Kim Jong Un’s grandfather and father were running the show. Trump proved he was different from his predecessors by rushing to grant Pyongyang’s longstanding wish.

Moreover, the supposedly comprehensive deal, embodied in the Joint Statement released after the summit, is nothing more than several stated intentions with no plans of how to proceed forward to achieve them. Aside from a general commitment to the “denuclearization of the Korean Peninsula”, the statement made no reference to a complete, verifiable and irreversible denuclearization of North Korea, listed no specific commitment by North Korea to relinquish its nuclear weapons or ballistic missiles and gave no time for the same.

In the aftermath of the summit, President Trump stressed how the summit brought us back from a potential conflict. However, we were only edging toward one because of Trump’s own warmongering statements about “fire and fury” and “destroying” all of North Korea. Relatedly, President Trump claimed that his own bellicose rhetoric is what got us to the summit to begin with, which conveniently ignores North Korea’s threat of nuclear retaliation if attacked and the South Korean President’s dogged diplomatic efforts to reduce tensions.

Trump then went on to contradict himself by stating that he knows, for a fact, that Kim Jong Un will immediately begin the process of denuclearization once he lands in North Korea, yet that it could still take a very long time. Then, despite his aforementioned certainty, Trump stated that maybe the North Korean leader will prove him wrong.

Last, in reference to security guarantees, President Trump said he was prepared to end the annual US-South Korean “war games” because they are costly and “provocative” toward Pyongyang. He also reiterated his stance on eventually removing US troops from South Korea. In one fell swoop, President Trump managed to confirm what North Korea has been saying for years about the provocative nature of the US-South Korea war games and also throw away the most important bargaining chip he has in his future negotiations with North Korea.

While Kim Jong Un pledged to work towards denuclearization, this in no way means that he will give up his nuclear weapons. He will drag the United States in negotiations for years while seeking the lifting of US sanctions against his country, secretly perfecting his nuclear arsenal and also getting massive financial aid from South Korea.

Iran is reported to have warned North Korea about dealing with the United States.

Iran is well placed to warn North Korea about dealing with the United States having seen how US President Trump walked away from the Iran nuclear on the 8th of May 2018 without even suggesting any amendments to the nuclear deal nor providing any justifications for how Iran was violating the nuclear accord. In fact, the IAEA confirmed on May 9 that Iran is in compliance with its nuclear commitments.

Even without Iran’s warning, North Korea has fully learnt the lessons of Iraq and Iran. The Iraq lesson is that had the late Iraqi President Saddam Hussein had nuclear weapons, the United States would not have dared invading his country in 2003 and he would have been still in power. The Iran lesson is that President Trump’s withdrawal from the nuclear deal has been an eye-opener for Kim Jung Un strengthening his instinct not to trust any future agreement with the United States and also not to relinquish any of his nuclear weapons.

A great lesson of history is that since the Second World War no country which acquired nuclear weapons has ever thought of relinquishing them. North Korea is never going to be the exception.

It is my view that Kim Jong Un will draw most of the benefits from the summit after which the crisis between the United States and North Korea will be back at square one exchanging threats and escalating tension.