A Look at Energy Economics in the UAE

The United Arab Emirates (UAE) gained independence from the United Kingdom in December, 1971. It is a federation of seven emirates: Abu Dhabi, Dubai, Sharjah, Fujairah, Ras al-Khaimah, Ajman and Umm al-Quwain. Each emirate is governed by its own ruler; together, they jointly form the Federal Supreme Council.

The UAE has accumulated so many accolades that no other country in the world could have done so in such a short period of its history. It has the world’s eighth largest proven oil reserves amounting to 97.8 billion barrels (bb) and is the third biggest exporter of oil after Saudi Arabia and Russia exporting more than 2 million barrels a day (mbd). It also has the seventh largest proven natural gas reserves in the world estimated at 215.1 trillion cubic feet (tcf). Moreover, the UAE’s economy is the second biggest in the Arab world after Saudi Arabia. It is also the most diversified economy among the Gulf Cooperation Council (GCC) countries.

The country owes its spectacular economic growth and fast development to two great visionary leaders: Its former president and ruler of Abu Dhabi the late Sheikh Zayed Bin Sultan Al Nahyan and the late ruler of Dubai Sheikh Rashid Bin Saeed Al Maktoum. The late Sheikh Zayed is credited with overseeing the development of the Emirates and steering oil revenues into healthcare, education and infrastructure. Likewise, the late Sheikh Rashid Bin Saeed Al Maktoum had a bold vision for Dubai and foresaw the future not in oil alone but also in other industries. 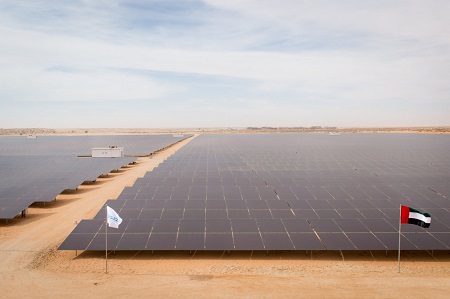 The UAE has one of the most open economies in the world. This tradition of welcoming business and trade goes back to early Gulf history, when ships sailed to India and along the coast of East Africa as far south as Mozambique.

Average GDP growth over the last ten years was about 8.4% —the highest in the GCC, which averaged 6.5%.

The UAE is also leading the GCC countries in the diversification of the economy and also in pursuing ground-breaking renewable energy and energy efficiency programmes. In 2015 the UAE ratified the Kyoto Protocol to the UN Convention on Climate Change, becoming one of the first major oil-producing countries to do so. Moreover, the Abu Dhabi government has also established one of the world’s most comprehensive clean energy initiatives.

Whilst a mainstay of the UAE economy, oil exports actually account for only about one third of the country’s GDP as a result of an aggressive government diversification policies.

The International Monetary Fund (IMF) expected UAE’s economic growth to increase to 4.5% in 2015, compared to 4.3% in 2014. The IMF attributed UAE’s potentially strong economic growth to the increased contribution of non-oil sectors, which registered a growth average of more than 6% in 2014 and 2015. Such contribution includes banking, tourism, commerce, industry and real estate.

And with imports totaling $273.5 bn, the UAE overtook Saudi Arabia as the largest consumer market in the region.

Although UAE has the most diversified economy in the GCC, its economy is still significantly reliant on oil. The UAE is starting to see the emergence of local manufacturing as new source of economic development particularly in government-led investments in aerospace and the automotive industries.

The UAE launched a diversification and liberalization programme to reduce reliance on oil and transform its economy from a conventional, labour-intensive economy to one based on knowledge, technology and skilled labour. The federal and individual Emirate governments have invested heavily in sectors such as aluminium production, tourism, aviation, re-export commerce and telecommunications.

Abu Dhabi’s Economic Vision 2030 and Dubai Strategic Plan are leading the drive towards diversification. The strategy is to increase investment in industrial and other export-oriented sectors, including heavy industry, transport, petrochemicals, tourism, information technology, telecommunications, renewable energy, aviation and space, and oil and gas services. Much has already been achieved in these fields, especially in satellite and telecommunications, the aviation sector and in renewable energy.

Tourism has played a large part in the success of economic diversification.  The UAE's two world-class airlines, Etihad and Emirates, as well as constant upgrading of aviation infrastructure, have played a major role in the advance of the tourism industry and are key contributors to the economy. Dubai, in particular, expects that the aviation industry will contribute 32% to its GDP by 2020.

As part of its diversification policy, the UAE has also made great progress in installing new, sustainable methods of generating electricity. This is evidenced by various solar energy initiatives at Masdar City and by other renewable energy developments around the country.

Economic growth across the UAE has led to massive increases in the demand for electricity. Current estimates indicate that the domestic demand for power will more than double by 2020.  With limitations on how much and how fast traditional energy resources, like natural gas, can be brought to market, as well as concerns about climate change, the UAE Government launched various initiatives aimed at identifying alternative means for producing the power needed to fuel its economy such as nuclear and renewable energy.

In pursuing nuclear energy, the UAE made its peaceful objectives unambiguous.  A policy document released in April 2008 outlined a series of commitments, including the decision to forgo domestic enrichment and reprocessing of nuclear fuel, the two parts of the nuclear fuel cycle that can most readily be used for non-peaceful purposes. Throughout the process, the UAE has worked closely with the International Atomic Energy Agency (IAEA) and other governments, including the United States.

The UAE says it will be investing $35 bn in non-hydrocarbon energy by 2020, including $20 bn on the Barakah 5.4-gigawatt nuclear power project. The Barakah nuclear power plant is UAE’s first nuclear power station. It began construction in 2012 and four APR-1400 nuclear reactors are planned to start operation successfully between 2017 and 2020.

Despite the critical role of oil and gas for the UAE, the country has made ground-breaking commitments in alternative energy. The UAE is taking steps to reduce carbon emissions through major initiatives in both Abu Dhabi and Dubai. UAE’s greatest initiative is the Masdar Initiative for alternative energy.

The UAE’s largest Emirate, Abu Dhabi, has committed more than $15 billion in renewable energy programmes. The Masdar Initiative underscores twin commitments to the global environment and diversification of the UAE economy. It focuses on the development and commercialization of technologies in renewable energy, energy efficiency, carbon management, water usage and desalination.

Rising from the desert outside the capital Abu Dhabi, Masdar city is laying the groundwork for when the UAE’s oil wells run dry. Driverless electric cars shuttle between energy-saving buildings topped with arrays of solar panels. On the edge of  the complex, a 10-megawatt solar farm lined with photovoltaic panels provides clean energy.

2- The Masdar Institute of Science and Technology with graduate programmes in renewable energy and sustainability.

3- A development company focused on the commercialization of emissions reduction, and Clean Development Mechanism solutions as provided by the Kyoto Protocol.

On a personal note, I had a first-hand view of what is being achieved in the Masdar Institute of Science and Technology when I was invited in February 2011 by the Institute to give a lecture on “Peak Oil & the Impending Oil Crunch”.

The Dolphin Project, which imports natural gas by pipeline from Qatar to the UAE, was the first major cross-border energy deal between Gulf countries. The project will free up Abu Dhabi’s natural gas reserves for crude oil recovery. Occidental Petroleum of the United States and Total of France each has a 24.5% equity stake in the project, while the Government of Abu Dhabi holds the remaining 51%. The first commercial deliveries of Qatari natural gas began in the summer of 2007 and will continue throughout the 30-year term of the development and production-sharing agreement signed with the Government of Qatar.

In an effort to enhance security of supply, Gulf governments are studying the development of oil pipelines that would bypass the Strait of Hormuz.  About two-fifths of the world’s traded oil currently is shipped by tanker through this 34-mile-wide passage.

If built, the pipelines could move as much as 6.5 mbd or about 40% of the amount currently shipped through the Strait.  One such pipeline, linking the Habshan oilfield

in Abu Dhabi with Fujairah port on the Gulf of Oman with a daily capacity of 1.5 mbd, began operating in August 2011 (see Map 1).  The pipeline allows the UAE to export about 60% of its crude exports to Fujairah port thus avoiding the strategic shipping chokepoint at the Strait of Hormuz. The pipeline’s capacity could be raised further in the future to 1.8 mbd thereby helping to secure the country’s access to the world markets. 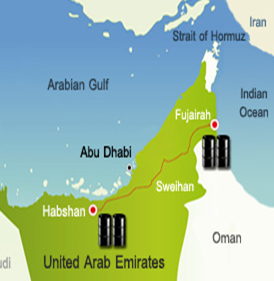 Would There Ever Be a Post-Oil Era for UAE & Other Gulf States?

A few experts have been projecting the advent of the post-oil era within the next fifty years. The underlying assumption is that alternatives to oil would have been fully and cheaply developed by then thus ushering the post-oil era. However, for UAE and other Gulf states, there would be no post-oil era.

Contrary to widely accepted wisdom, oil will remain an integral part of the Middle East economies throughout the 21st century and far beyond. Even if cheap alternatives to oil in transport, water desalination and electricity generation were to become readily available in the future, oil will not be left underground because the Arab Gulf oil producers will use it to power thousands of water desalination plants to generate enough water not only for drinking but also for irrigation thus making the desert bloom again. They will also use it to dominate the global petrochemical industries and any industries in which oil is a feedstock.

Dr Mamdouh G. Salameh is an international oil economist. He is also a visiting professor of energy economics at the ESCP Europe Business School in London.