The Strategic Importance of the Suez Canal

Photo 1
The Ever Given Container Ship 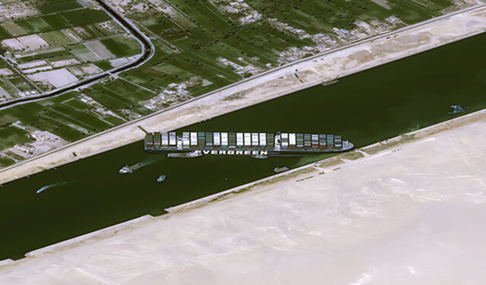 It has taken a whole week to dislodge and refloat the Ever Given to enable it to continue its journey across the Suez Canal. Shipping sources estimated that more than 400 ships, oil tankers and container ships that have been waiting in the Great Bitter Lake to exit the Canal are now streaming out of the canal (see Photo 2).

The operators of the Ever Given have said that the vessel ran aground because of high winds and a sandstorm. While shipping experts agree that wind might have been a factor, they also suggested that human or technical error or both may have come into play.

A significant incident like this is usually the result of many reasons: The weather was one reason, but maybe there was a technical error, or a human error,” said Lt. Gen. Osama Rabie, chief of Egypt’s Suez Canal Authority. 1

General Rabie said that ship captains are asked to keep any material that might be required for an investigation. He noted that 12 northbound ships had passed through the canal ahead of the Ever Given that day, and another 30 ships had travelled through from the opposite direction. Shipping experts have raised the same question.

An investigation has already started to determine the real cause of the ship going aground. There were reports that the ship’s captain has refused Egypt’s request to check the ship’s recordings during its passing through the Suez Canal and other relevant documents. If this is true, then this lends credence to claims that the cause of the incident was either a human error on the part of the captain of the ship or a technical error or both.

Why the Suez Canal Is So Important?

The importance of the canal stems first and foremost from its location; it is the only place that directly connects the waters of Europe with the Arabian Sea, the Indian Ocean and countries of the Asia-Pacific.

Without the Suez, shipments traveling between those parts of the world would have to traverse the entire continent of Africa around the Cape of Good Hope, adding hefty costs and substantially extending their journey times.

A solution to that problem appeared elusive for centuries until the vital 120-mile waterway was constructed over the course of a decade in the mid-19th century -- a feat made only possible because the Mediterranean and Red Seas were found to be roughly level in altitude. 3

The time saved by the passage is almost invaluable. Today, a ship traveling from a port in Italy to India, for instance, would cover around 4,400 nautical miles if it passed through the Suez Canal -- a journey that, at a speed of 20 knots, would take about nine days.

But the second-quickest way to complete that same journey would be via the Cape of Good Hope and around Africa. At the same speed, it would take three weeks to traverse the route, which is 10,500 nautical miles long.

Adding to its importance is that there are no shorter and more cost-effective alternatives to the Suez. Were it not for the Red Sea stretching up above the Horn of Africa and along Sudan and Egypt, no land masses would be narrow enough to support an artificial waterway that links Europe with the Asia-Pacific.

Instigated by French interests and exploration, the Suez was built over the course of 10 years by Egyptian labour. Financial troubles forced the Ottoman governor of Egypt to sell a controlling stake in the waterway to Britain in 1875; 13 years later, a multinational summit resulted in an agreement that the canal would be free for all countries to use, both in peace and war.

Its strategic location made it a flashpoint in both of the 20th century's major conflicts; in World War I, Turkish forces tried to attack the canal from the east, and in World War II, the Nazis' Afrika Korps aimed to do the same from the west.

But the canal remained under British control until the late Egyptian President Gamal Abdel Nasser nationalized it in 1956, sparking the Suez Crisis.

Egypt completed in 2015 a major expansion of the Canal allowing two-way traffic along most of the strategic waterway. This helped reduce waiting times and increased the number of ships able to transit the Canal from 12,225 ships annually to 19,000 and the daily passage rate from 49 ships to 98. Construction included digging a 35km parallel waterway and deepening another 37km of the existing canal to allow the passage of even bigger VLCCs. 5

Impact of a Long Shutdown on the Global Economy

Even before the Ever Given incident, global supply chains were being stretched to the limits making it much more expensive to move goods around the world and causing shortages at a time of unprecedented demand. More than 80% of global trade by volume is moved by sea, and disruptions are adding billions of dollars to supply chain costs.

Since the Ever Given ran aground, the rate for renting oil tankers for shipping Middle East oil to Asia has almost doubled surging by 47% to US$2.2 million. 6 Meanwhile, shipping companies have started to divert tankers bound for Asia away from the Suez Canal to the longer route around the Cape of Good Hope in Africa.

About 12% of global trade sail through this vital waterway each day. Since the Ever Given lodged itself sideways in the canal closing off the main ocean-going waterway between Europe and Asia for a week, much of that cargo sat idle. Owners and shippers were waiting to see whether the canal will be reopened soon or gamble on expensive and time-consuming alternate routes. Lloyd's List estimates that the waiting game is costing $9.6 bn per day. 7

Diverting ships around Africa would have added a two to four week delay and several million dollars extra costs in fuel. A normal voyage for a vessel averaging 12 knots (14 mph) from Suez to Amsterdam, takes 13 days via the canal. Around the Cape of Good Hope, it takes 41 days.

Global supply chains, already significantly disrupted by the COVID-19 pandemic have been further stressed by the possibility of a prolonged shutdown of the Suez Canal. This is just one more challenge to the supply chain coming on top of congestion operations and other things impacting the supply chain. The greatest impact would have been felt in the European market which relies most on transfers through the canal but given the interconnected nature of global trade, there would have been also a knock-on effect for other parts of the world.

A week-long delay for a few hundred ships at the Suez might have only a negligible impact for consumers, but a prolonged delay could increase the cost of shipping, complicate manufacturing and ultimately drive up prices.

Crude oil prices didn’t immediately react to the incident in the Suez Canal because of a remnant of oil glut left from the days of the pandemic capable of offsetting the 5.5 mbd of oil that normally cross the canal destined for Europe. Moreover, prices have been blunted by news of further COVID-19 lockdowns in Europe that are likely to continue to depress demand and prices.

Still, upward pressure on prices has been felt adding $1.5 a barrel when it started to look as if salvage operations will take more than few days.

Now that Suez Canal is back to normal business, any fears of serious disruptions in oil flows between the Middle East and Europe could be put to rest. However, if the Suez Canal blockage lasted a few weeks, it could have seriously impacted on oil supplies and oil prices adding some $4-$5 a barrel.

Still, oil supplies from the Arab Gulf to the Asia-Pacific region would have hardly been affected because they bypass the Suez Canal. Moreover, the situation for oil shipments from the Gulf region to Europe across the Suez Canal could have been eased by two oil pipelines. 8

One is the Egyptian SUMED oil pipeline which connects the Red Sea to the Mediterranean. Acting as an artery in the global oil trade, the SUMED pipeline was designed to pump 2.5 mbd of Gulf crude oil from Ain Sukhna terminal on the Red Sea to the Mediterranean port of Sidi Kerir, near Alexandria thus allowing very large crude carriers (VLCCs) that would otherwise sit too deep in the water – to continue to use the Suez Canal (see Figure 1). 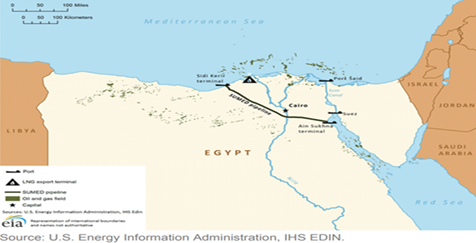 There is an oil storage capacity for 20 million barrels at either end of the SUMED. VLCCs could either discharge their cargo at the Ain Sukhna terminal then return to the Gulf for their next consignment or they can unload part of it and then sail through the waterway before reloading at Sidi Kerir.

The other is the Israeli Eilat-Ashkelon pipeline (EAP) which connects the port of Eilat on the Gulf of Aqaba to the port of Ashkelon on the Mediterranean and is currently capable of transporting up to 600,000 barrels a day (b/d) (see Figure 2). 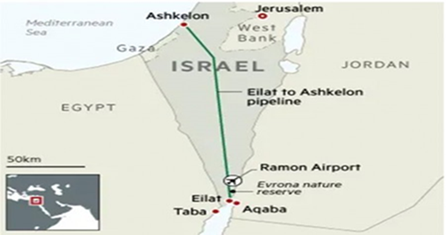 Both pipelines would have managed to accommodate 3.1 mbd or 56% of the 5.5 mbd that would have been blocked in a prolonged closure of the Suez Canal.

Alternative Routes to the Suez Canal

In terms of speed and cost of shipping, alternative routes are no match to the Suez Canal.

1. Around the Cape of Good Hope

Sailing around Africa will add four weeks and several million dollars extra costs in fuel. A normal voyage for a vessel averaging 12 knots (14 mph) from Suez to Amsterdam, takes 13 days via the canal. Around the Cape of Good Hope, it takes 41 days.

The route via the Cape of Good Hope is the most likely detour even for vessels that can fit through the Panama Canal. In 2020, due to a combination of excess capacity and falling fuel prices, some shippers did just that opting to go the Africa route to avoid the Suez Canal transit fees.

There is one more possibility but it too has severe limitations. A shorter route through the Arctic known alternately as the Northern Sea Route or NSR is being touted by Russia.

The number of vessels using the NSR has increased to several hundred each year thanks in part to global warming that has reduced polar ice. However, traffic there still amounts to a mere fraction of what passes through the Suez. 10

The global economy gave a sigh of relief at reopening of the Suez Canal exactly a week after it has been blocked.

Still, the incident has demonstrated the great importance of this vital waterway to both global trade and the global economy at large.

A prolonged blockage could have disrupted global trade and supply chains around the world adversely affecting everything from the global economy to oil prices and ordinary customers around the world.

*Dr. Mamdouh G. Salameh is an international oil economist. He is one of the world’s leading experts on oil. He is also a visiting professor of energy economics at the ESCP Business School in London.

2. Mamdouh G Salameh, “How Vulnerable Are the World’s Key Oil Chokepoints? Posted by the ESCP Research Centre for Energy Management (REEM) on 13 August 2018.

5. Mamdouh G Salameh, “A Tale of Two Oil Pipelines & Israel’s Threat to the Suez Canal” published by the Turkish Jouranl Derin Ekonomi in Istanbul in October 2020.

9. Jakie Northam, “Here’s How a Long Shutdown of the Suez Canal Might Roil the Global Economy”.