Renewable and nuclear energy – the two largest sources of non-emitting technologies – do not need to be mutually exclusive if forward-thinking countries and companies can develop suitable complementary advanced energy management techniques. New hybrid energy solutions could play to the strengths of the respective technologies while acknowledging the shifting dynamics of electricity markets that are adjusting to the realities of an increase in intermittent generation models.  And with developing countries frequently having more flexibility to design their grid structures (in comparison to pre-existing limitations in many first-world countries), the opportunities may exist to demonstrate these advances in emerging economies.

Developing countries (especially in Africa and Asia) expecting energy sector growth in the next 30 years can strategically use this growing demand to support their projected huge economic expansion, social welfare improvements, and energy security while contributing to global carbon emission reductions. One of the key success factors to consider should be how to best leverage nuclear energy. With an integrated strategy encompassing renewable and nuclear energy, countries can address numerous key challenges which may be common or more country specific. A well-conceived plan can simultaneously support socio-economic development and long-term energy security.

It is now widely acknowledged that human activity is leading to an environmental global warming crisis. This has contributed to a widespread, aggressive push towards non-emitting power generation options due to the environmental damage caused by fossil fuel emission by-products. Countries all over the world are embracing renewable energies (solar, wind, hydro, biomass, tidal, etc.) including nuclear power, the largest current non-emitting generation source.  In the meantime, natural gas has been adopted as a short- and medium-term lower emissions alternative to coal and oil generation.

While developed countries already have well-established electricity transmission, distribution, and generation systems, developing countries without extensive existing infrastructure have the advantage of greater flexibility and expansion, both now and in the future due to their relatively small systems.  Because they do not have as many existing infrastructure constraints, they have more freedom to customize and responsibly develop their electrification program, balancing very low emitting and non-emitting generation that may work best for their national interests and increasing demand requirements.  So far, contributions to carbon emissions has been around 2% on average annually with a potential increase to almost 5% in 30 years, according to the International Energy Agency (IEA).

Both developed and developing countries understand the global necessity for environmental considerations, which is a driving force behind the expansion of non-emitting generation.  The primary larger scale options currently include wind, solar, hydro, and nuclear; all are relatively established technologically, however nuclear requires the largest support infrastructure based on its higher complexity but that also creates an opportunity for deeper longer-term socio-economic benefits.

American thinktank Third Way published a report in September 2020 considering which countries may be capable of operating nuclear power plants by 2050 – the report available on their website provides more information about the evaluation process. By using Third Way categorizations, we can narrow the initial country focus to those countries potentially looking at all three options and how they may consider decision-making between possible wind, solar, hydro, and nuclear generation expansion. The table and map below show the country classifications for the three main nuclear readiness categorizations of interest. 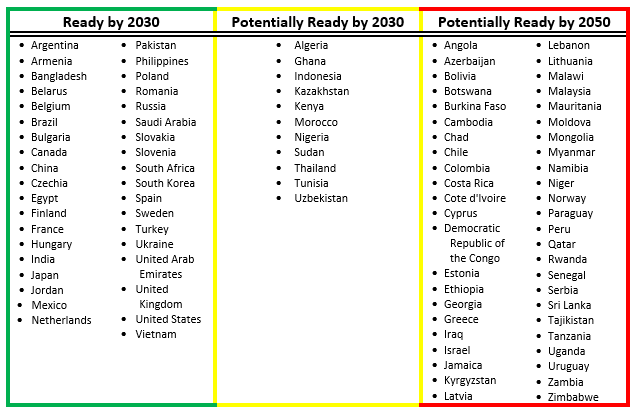 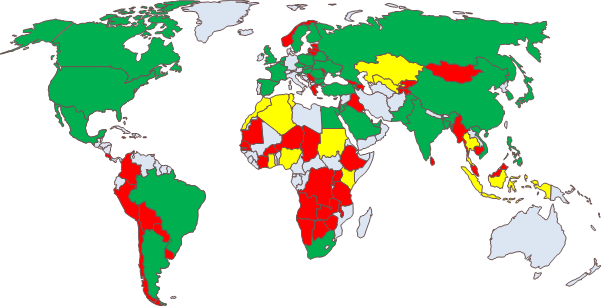 Using a country’s gross domestic product (GDP) (as projected by the United Nations) as a possible indicator of future economic prowess, we can assess its likely economic ability to develop generation resources. Wind and solar have lower capital costs which help the balance sheet in the short term and while their revenue generation is more intermittent, their financing and constructability benefits typically favour their deployment over nuclear. 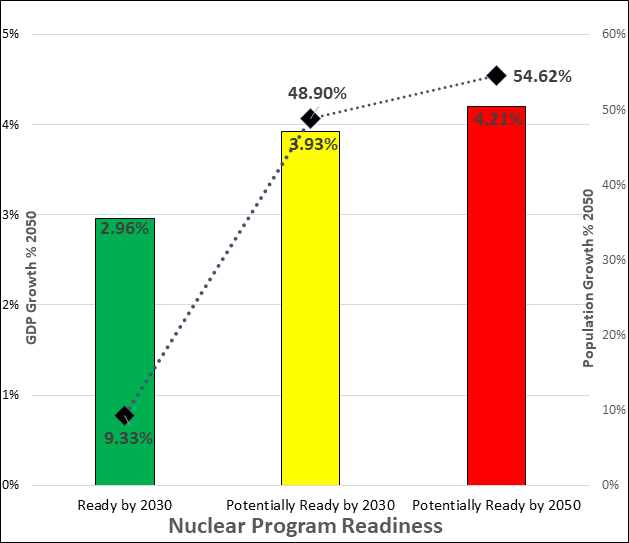 As these economies expand, how will the population expand with it? The graph above shows limited variation in projected annual GDP growth through 2050 (3% – 4.2%) between the three groupings. However, there is a large variation in the projected population growth by 2050 (also projected by United Nations) in the countries which is a key factor for the individual governments – how does one responsibly build infrastructure to support a dramatically expanding population and ensure continued economic growth? To fuel economic expansion, growing populations will need stable electricity infrastructure developed in a long-term fiscally responsible manner that allows them opportunities to improve their quality of life.  If the government elects not to do this directly (i.e. state-owned enterprises), it should create and implement a regulatory system that allows another entity (i.e. privately-held companies) to undertake the investment required to do so.  The countries in the Potentially Ready by 2030 and 2050 groupings are looking at population growths five times those seen in counterparts that are Ready by 2030. That is a significant planning challenge for basic infrastructure improvements to accommodate 50+% population increases in a 30-year period.

Electricity generation growth projections from international organizations shed further light on the situation. For more advanced countries considered Ready by 2030, the chart below shows that their growth potential in cumulative electricity growth far exceeds that of the Potentially Ready groups in 2030 and 2050. But that only tells part of the story, because the latter two have significantly higher electricity growth percentages through 2050 (compared to 2020 levels). These two groups are starting from a lower initial point but need to add tremendous volumes relative to their current amounts. In fact, some individual countries Ready by 2030 actually project to have negative electricity demand by 2050. 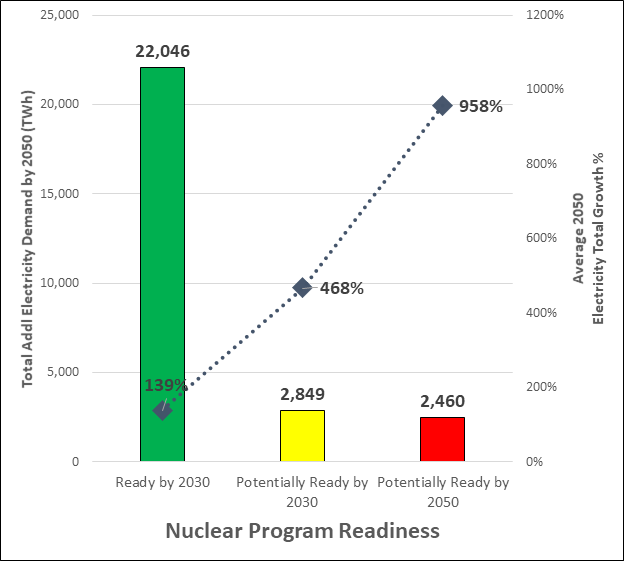 Existing nuclear program countries (in Ready by 2030) already have advanced economies with high GDPs and their potential electricity growth as a share of existing power is relatively small compared to countries still developing their possible programs by 2030 or 2050.  As shown in the graph above, while the additional total demand may be much larger in Ready by 2030, existing infrastructure limits those same countries, making them beholden to transmission and distribution systems already in place.  In contrast, the Potentially Ready groups have more flexibility to develop infrastructure outside the constraints of existing systems – perhaps more easily leading to localized microgrids or hybrid energy systems/parks performing multiple functions such as electricity generation, energy storage, desalination, hydrogen production, process/district heating, etc. So, while the total growth volumes may be smaller but with much larger growth rates, the planning process is likely to be quite different because the developing countries have more flexibility to accommodate. 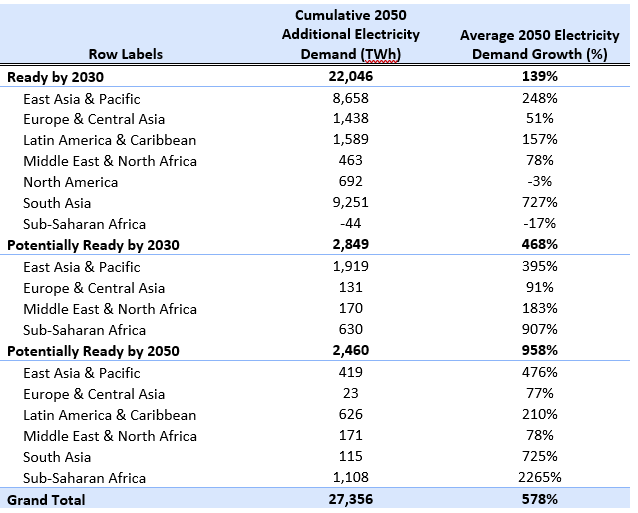 It is clear that huge demand is there – so many of these developing countries are thirsty for more energy and electricity to help drive their economies for the expected growth by 2050.

Asia and Africa drive the additional electricity demand; the question is how to do it responsibly? Recent nuclear reactor technology developments offer smaller modular reactor designs that should closely match the practical needs of many countries Potentially Ready by 2030 and 2050 – timing will be key. The new small modular reactors have improved safety, more construction certainty, shorter lead times, and are more flexible from a siting and operations perspective – a complete focus on risk reduction and mitigation while expanding operational flexibility.

Given that economics drive capital-intensive projects such as power generation, financing is guaranteed to be a key consideration. Where will the money come from and in what form?  Different models are already emerging with Organisation for Economic Cooperation and Development (OECD) and other international organizations doing extensive work and development efforts. New project financing is a key question, especially related to nuclear projects and in countries looking to develop new nuclear programs. Financing as part of a complete package is likely to be more successful, as already seen from bids by countries such as China and Russia. The geopolitical battlefield among France, South Korea, USA, China, and Russia will only get tougher as interest expands. The emergence of full-fledged cooperation packages will allow developing countries to smoothly institutionalize the strict regulatory requirements from international nuclear organizations and benefit from technology transfer and capacity expansion. Already, the International Atomic Energy Agency (IAEA) stated in their 2019 Annual Report that 28 Member States are actively considering, planning, or embarking on developing a nuclear power program – and those are just the ones that have formally engaged IAEA.

Economic growth is not the only criteria influencing the decision-making. The next article in this series contains a high-level overview of key social correlations on the decision-making process followed thereafter by energy security. Stay tuned!

John Valentino is the International Clients Director at Centrus Energy and graduate of ESCP Business School’s Executive Master in Energy Management (Class of 2019).