René Mauer and Lisa Steigertahl released the “EU Startup Monitor” during the European Commission's annual SME Assembly. The teachings of the only startup study purely based on primary inputs of active European founders, present the most comprehensive overview of the current startup landscape and can help shape Europe’s policies. 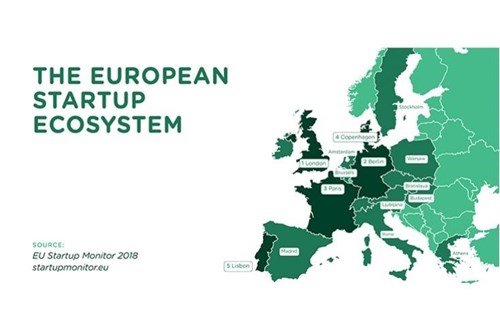 The SME Assembly, which took place on 21 November in Graz, Austria, is the most significant event for small and medium-sized enterprises (SMEs) in Europe, and creates the governance structure of the Small Business Act with the network of SME Envoys.

The EU Startup Monitor presents comparable data for 21 startup ecosystems in Europe. Startup hubs are growing everywhere and with countless initiatives from both governmental and private players, it is a great time to take a closer look at the current state of the European Startup Ecosystem.

“The European Commission initiated the EU Startup Monitor as a primary research project to provide the necessary evidence for gauging the success of its policies and to be able to adjust its activities if needed. Furthermore, the project intends to showcase the current development of startup ecosystems,” commented Kristin Schreiber, the Director in charge of the COSME Programme (fostering the competitiveness of European SME's) as well as SME, start-up and scale up policy in DG GROW, the DG for Internal Market, Industry, Entrepreneurship and SME's of the European Commission.

The analysis for the EU Startup Monitor was also conducted to add elements about startups to the SME Performance Review - the European Commission’s most important SME publication. 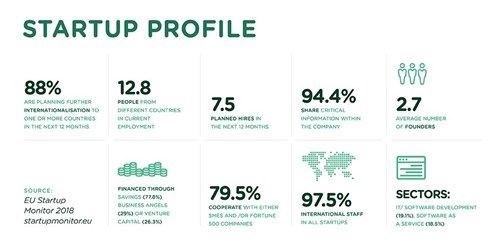 The EU Startup Monitor is the only startup study purely based on primary inputs of active European founders, since all founders or senior management executives (e.g. CEO, CFO, CTO, etc.) of active startups in all stages and sectors and supported by national startup ecosystem stakeholders, such as associations, networks and events as well as the European Commission SME Envoys, had been invited to make their voice heard and to actively contribute and shape the European startup ecosystem by participating in an online survey. “Without the support of the European startup ecosystem family, we would never have been able to showcase data that is both authentic and meaningful for public and private interest groups,” commented ESCP Europe Master of Science in European Management graduate Lisa Steigertahl, who’s a researcher for the EU Startup Monitor, the former co-founder and CEO of the European Startup Network and the former Head of Research at the German Startups Association.

All EU Member States were encouraged to participate and sufficient data was generated for 18 countries, so that the results present the most comprehensive overview of the current startup landscape. “Startup Data are very valuable but difficult to get, particularly on a European scale. This is why we were particularly happy to work with the European Commission on this snapshot of the European startup landscape,” adds co-researcher Professor René Mauer, who is the Scientific Director of the Jean-Baptiste Say Institute for Entrepreneurship and Holder of the Chair for Entrepreneurship and Innovation at ESCP Europe’s Berlin campus.

The EU Startup Monitor shows that startups are being created all over Europe, with the biggest geographical hubs in London, Berlin, Paris, Copenhagen and Lisbon. The average founder is male (82.8%), holds a university degree (84.8%) and was 35 years old when founding the startup. Startups are commonly founded in teams (on average 2.7 co-founders). The startups can be found in multiple sectors varying from traditional IT/software development (19.1%) to trending green technologies (4.0%). They offer online solutions (only 0.7% offer offline solutions), generate revenues mainly or entirely through business to business markets (71.8%) and on average employ 12.8 people. The results showed a clear ambition to further grow both, the number of employees (7.5 planned hires within the next 12 months) and markets operated in (88% are planning (further) internationalisation). Locations for growth are within the Eurozone (85.0%) and outside (40.0%), with the United States of America and its famous Silicon Valley in the state of California still in the lead (43.4%) as desired spots for expansion but increasing interest in the Asian markets (25.8%). 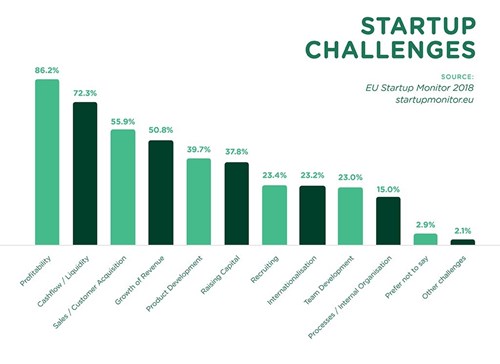 Concerns about profitability (86.2%) and cashflow (72.3%), which most startups consider to be their biggest challenges, are typically also answered by expansion. Moving to another market means moving towards a bigger base of potential customers, a larger pool of people for recruiting, and often new capital markets to approach for further funding. Another way to overcome challenges and to access new opportunities is through working together, as it was reported that 71.1% already engage in cooperation with large corporations (Fortune 500 companies, and/or SMEs). It is to be noted that cooperation between startups and other SMEs is three times as common as cooperation between startups and large corporates (Fortune 500 companies).