Brexit: The Impact on Professional Services and Businesses

When put to the vote, Theresa May’s Brexit deal was overwhelmingly rejected by Parliament. MPs voted 432 to 202 against the UK Prime Minister’s withdrawal agreement - the largest defeat for a sitting government in history.

Despite May’s government surviving a no-confidence vote after this crushing defeat, the UK remains in Brexit deadlock as the 29th March approaches. Much uncertainty still hangs in the air for businesses and individuals.

ESCP has had a strong voice on Brexit. The School launched the Re-Thinking Europe Series - inspired by the late Mme. Nicole Fontaine, former President of the European Parliament - and it has also supported the series of exclusive forums on this topic organised by the French Chamber of Commerce in Great Britain (CCFGB). Our response to this major political challenge was one of the reasons the Times Higher Education awarded the London Campus 'UK Business School of the Year' in late 2018.

On 16th January 2019, CCFGB members and organisations from the retail, finance, legal, consulting, tourism, and banking industries came together to discuss the latest on the impact of Brexit on professional services, individuals and businesses. 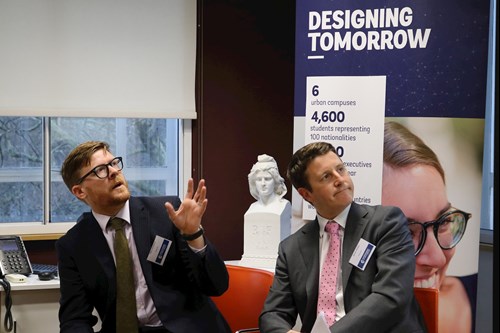 What can employers do to support their EU employees?

Brexit, in whichever form it finally takes, will have a significant impact on employers who have traditionally relied on labour from the EU. At present, political uncertainty and the differentiation of EU workers who have been long present in the UK is a very real issue affecting employee wellbeing.

In their presentation, Gateley PLC's Gareth Wadley and Oliver O’Sullivan highlighted the key changes to be expected in UK immigration law over the next two years, and how these changes relate to current workforces and workforce plans for the future.

To find out more, you can watch this short summary of the presentation:

Established in 1819, ESCP has educated generations of leaders and entrepreneurs. With its six urban campuses in Berlin, London, Madrid, Paris, Turin and Warsaw, ESCP's true European identity enables the provision of a unique style of cross-cultural business education and a global perspective on international management issues. ESCP welcomes 5,000 students and 5,000 executives from 100 different nations every year, offering them a wide range of general management and specialised programmes (Bachelor, Masters, MBA, Executive MBA, PhD and Executive Education). ESCP is among the 1% of business schools worldwide to be triple-accredited (AACSB, AMBA, EQUIS).

ESCP and the CCFGB will host a Brexit Conference in June, 2019. More details to be announced soon.