These awards, now in their 14th year and widely referred to as the “Oscars of higher education”, shine a spotlight on the exceptional achievements of individuals, teams and institutions working in our sector today. 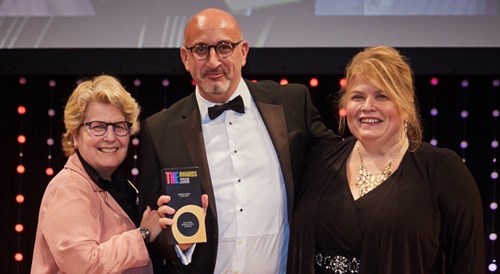 The award was presented in front of 1,000 business and sector leaders at the Grosvenor House Hotel on Park Lane, with U.K. Dean Professor Simon Mercado receiving the prize from Sharon Butler, EVP for Global Education at official sponsor Flywire, and broadcaster Sandi Toksvig (pictured).

ESCP has not been afraid to tackle the questions and challenges thrown up by a rapidly changing political and commercial environment. In doing so, via a wide range of pioneering initiatives, it has claimed the title of Business School of the Year.

Maintaining its reputation for innovation and excellence in international management education, the School launched a new MBA in International Management. ESCP also expanded its innovative Bachelor in Management (BSc) programme, which moves students across three European countries in three years, tapping into its network of European campuses.

Responding to Brexit, the School put politicians from the U.K. and continental Europe together with leading industry figures for a series of ‘Re-thinking Europe’ events. It launched a collaborative book project in which students worked with Nicole Fontaine, former President of the European Parliament. Such activities cemented the School as a symbol of Anglo-French co-operation and as a leading European and U.K. institution.

The judges were especially impressed by ESCP’s response to large-scale technological and environmental developments. They praised the School’s Electric Vehicle Road Trip (EVRT) project, in which students used electrical vehicles to visit 10 European countries so as to encourage the use of carbon-neutral transport. The judges also identified the School’s response to a call in the UK government’s industrial strategy to develop executives for the fourth industrial revolution. Amongst several initiatives here, the School introduced a new Executive Specialised Master (EMS) in Manufacturing Automation and Digital Transformation, run in collaboration with the advanced robotics company, Comau.

In summary, they praised ESCP Business School (London) for undertaking activities that were not only responsive but also innovative. “Higher education is not always credited with being quick to respond to changing business and political environments, but this business school managed to deal with changing government priorities in an engaging way, producing programmes around Brexit and the industrial strategy,” the panel said.

“This award is testament to a bold educational strategy that harnesses Europe’s diversity as well as to the excellence of our staff, students and alumni. As a European school at the heart of the U.K., we are honoured to receive such recognition and to celebrate the strength of our U.K. and European sectors.”

“We are proud of our British presence and of the U.K. sector into which we have been welcomed and recognised. We continue to do all that we can to strengthen U.K.-European ties and to work warmly with our peer institutions in order to advance international management education and research.”

“At a time when universities face challenges and headwinds, when politics and social attitudes can seem to call into question many of the things that they stand for and hold dear, it is particularly important to champion the values, creativity and dedication of those who live and breathe higher education.

“As ever, our shortlists represent the best of the best, but our judges also reported that this year’s entries were the strongest that they could remember, so all those honoured should be incredibly proud. It's THE's great honour to help celebrate their success.”

For more coverage of the awards, including photos from the ceremony, please visit the-awards.co.uk.

Details are also online at Times Higher Education and, of course, the awards will feature in next week’s issue of THE magazine.

The full list of this year’s winners is below, and profiles of their winning entries can be viewed here.

University of the Year

Business School of the Year

International Collaboration of the Year

Research Project of the Year: STEM

Most Innovative Teacher of the Year

Canterbury Christ Church University, in collaboration with the Palestinian Ministry of Education and Higher Education

Outstanding Contribution to the Local Community

Middlesex University and the University of Greenwich, in collaboration with The Refinery

Technological Innovation of the Year

Widening Participation or Outreach Initiative of the Year

Outstanding Research Supervisor of the Year

Excellence and Innovation in the Arts

Most Innovative Contribution to Business-University Collaboration

Recycling Lives, in collaboration with the University of Central Lancashire

Established in 1819, ESCP has educated generations of leaders and entrepreneurs. With its six urban campuses in Berlin, London, Madrid, Paris, Turin and Warsaw, ESCP's true European identity enables the provision of a unique style of cross-cultural business education and a global perspective on international management issues. ESCP welcomes 5,000 students and 5,000 executives from 100 different nations every year, offering them a wide range of general management and specialised programmes (Bachelor, Masters, MBA, Executive MBA, PhD and Executive Education). ESCP is among the 1% of business schools worldwide to be triple-accredited (AACSB, AMBA, EQUIS).