At 9:30am we drove the cars and a caravan to the ESCP’s Turin Campus. Charging was a challenge; we had to ensure that the cars were fully-charged before we entered the city as there are no Tesla super charging stations. The nearest super charger was in Cavaglia, which is 60 km away.

As we drove through Turin, we realised that the cars were drawing a lot of interest and admiring looks. This was no surprise given that Turin is the automotive manufacturing capital of Italy, and the Italian passion for sports cars is well known. After all, Italy gave the world the Ferrari and Lamborghini!

Design-wise the Tesla Model S resembles the sleek Maserati Ghibli. However, the major difference lies in the fact that Tesla cars are completely silent.

We parked two cars in front of the majestic building that greets visitors to the School’s Turin campus, and were greeted by the welcoming faces of journalists and members of the ESCP Europe community. It was wonderful to be greeted in a new city by new friends who share a common network and passion for clean tech. The ESCP Europe EVRT was featured on RAI TV news. To watch the video, please click the link below: 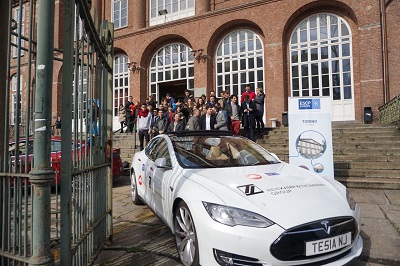 We had a great audience who were intrigued by the updates from our fascinating journey and curious about the itinerary ahead. Once the presentations ended there were informal discussions over Italian coffee. One common question that came from students was “how can we build a career in the clean tech industry?” We advised them to learn more about the energy industry as a whole and shared what we learnt from visiting the Tesla factory - currently the company has 1,500 job vacancies worldwide! 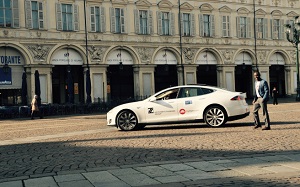 The audience was also able to enjoy test drives and had the chance to ask questions about the vehicles and their performance. After engaging conversations with people interested in sustainable transport, we headed into the centre of Turin.

We were recommended to eat at a restaurant called Eataly, where we enjoyed a lovely meal and toasted two of the team who were celebrating their birthdays while on the road. We also explored the plaza and several other streets.

After a couple of hours, it was time to say goodbye to Turin. However, we couldn’t leave without one last challenge! The Teslas were parked in a car park which was clearly designed for the smaller Fiat 500 – getting out of this small car park really tested our driving skills!

We took the road towards a snowy mountain range. Our next stop would be a small village called Aosta, located in the heart of the Alps and known for its snow-capped mountains, Roman monuments and medieval castles.

The safety system of the Tesla Model S is such that if a seat belt is removed, as it was by Oscar, the seat belt warning sign overrides the GPS map. We ended up taking a wrong turn and had to drive an extra 8km to find the U-turn point and catch up with the rest at the Super Charger station. We crossed several toll stations, each time paying the motorway charge.

We wanted to get to Geneva before the sun went down so that we could marvel at the mountains and take some pictures. We were excited about creating a Top-Gear-style video featuring the mountains and the cars using our drone camera. 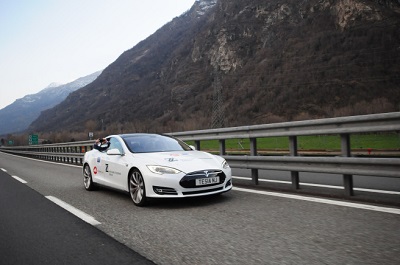 Thor and Aurora had a joyful experience. Jupiter missed the fun!

Oscar drove Jupiter at a constant speed of 120 km/h to catch up with the others. Once we reached the border and entered the 11km-long Frejus tunnel, we knew that there was no way Aurora and Thor were in front of us.

What was meant to be a short stop became a full-fledged snow fight, all-against-all! The drone was zooming over everyone, taking in the scenery and all of the fun happening beneath it.

Finding a chalet, teams Aurora and Thor sipped on hot chocolate and wine, enjoying the crackle of the flames from the fire place.

Meanwhile we were waiting at an Ibis hotel close to where our car was charging. After a long wait, team Aurora and Thor finally had caught up to us. The last 540km to Paris went smoothly, mainly because there were no restaurants open and we were unable to stop to buy food. Luckily, we had a quick dinner at a gas station and were able to cover quite a lot of distance in good time.

Finally, we charged the batteries to almost 100% at a charging station located in a Novotel Hotel car park, arriving in Paris at 7:00am. This gave us just enough time to sleep for an hour before our meeting with the British Ambassador to France.

To watch a video about our visit to the ESCP’s Turin Campus, please click the link below: