After a year of planning the first ever ESCP Tesla tour it has finally started in London. We are embarking on a great experience in our Tesla model S cars to raise awareness of the ongoing climate change and clean energy initiatives across Europe.

We will be introducing the team throughout this post as we hit the road to our first destination in the Netherlands, in the small city of Tilburg.

Before we began our epic journey, there was a launch event (12th of March) at the ESCP London Campus. In day one of our blog posts we talk about the inspirational speakers that attended in greater detail, but overall the event provided everyone with the fantastic opportunity to look at one of the most interesting car brands out there.

Most people were taken by utter surprise when they first experienced the acceleration of the Tesla car. Similar to me, everyone was taken aback when the driver plunged his foot down to accelerate the car from 0 to 60 miles in 4,2 seconds. It leaves you lightheaded and with a feeling of excitement as you realise that this is a completely different kind of driving experience.

SETTING OUT TO FOLKESTONE 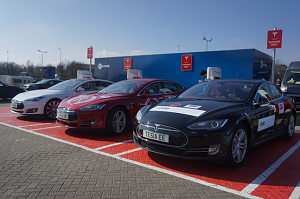 As we set out to Folkestone to catch the train going through the famous Eurotunnel, the benefits of the car quickly became apparent. The huge touchscreen in the centre of the car wedged between the driver and the co-pilot is very convenient to use and controls everything in the car. 3G Internet and free Spotify is included everywhere you go!

Folkestone: Our first Super Charge Station Stop-pit, it only took us 30 minutes to charge the car!

It provides essential data on the driving performance. A whole array of sensors measure the remaining energy versus distance still left to travel, and on another set of graphs illustrating the average and total travel range of the car. This data is combined with the Tesla Google Map which automatically calculates the route via the network of Super Charger stations. This means it is nearly impossible to run out of battery when you follow the route on the map.

THOR, AURORA, JUPITER AND HOW WE GOT THERE…

NOW, enough about how the Tesla car works! We bought Walkie Talkie’s to communicate while driving on the road. I would like to proudly present our code names for our God like EV cars:

To make sense of these names it is important to introduce the team a little bit more. We are a multinational driving team with members from Germany, France, Greece, United Kingdom, India, Lebanon, Taiwan and Chile, and our diversity inspired the names. Thor is the name of a war god from the German Mythologies, the name Aurora was inspired by the goddess of dawn in Roman mythology and the name JUPITER is based on the planet that represents Zeus in Greek legend.

To avoid traffic in central London we decided to circumvent the city and soon arrived in Folkestone. It was very comfortable to be able to have the cars charged while we quickly nipped into the building to get a snack before leaving England behind and delving into the country that has given us Belgian chocolate, waffles and pommes frites.

Going through the Eurotunnel was a completely new experience, what a great alternative way to travel!

Maher, Matheus and Oscar who were passengers in Aurora decided to make a detour from the planed route between Calais and Tilburg into Brugge. This turned out to be a longer route. However, Aurora and Thor made it into the town centre and into the market square. 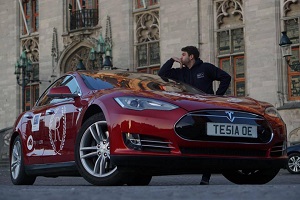 After failing to find the rest of the gang, Tesla Jupiter decided to continue driving on to Tilburg. We were able to reach our destination with no further problems, we got lucky! Soon Aurora and Thor had caught up with us and we scrambled to get all the Pomodore we could eat. They told us that a lot of people approached the cars in Brugge and asked questions about the electric vehicles and the purpose of the trip. After a dinner that left us full to the brim we decided to call it a night.

In the cars are: