As we stepped outside of our hotel in Tilburg, Netherlands, the chilly air and sunlight welcomed us to a fresh start to the day. Just a 20-minute drive brought us to our first destination: the Tesla plant.

The demand for cars outstripped the capacity of the first Tesla plant, so the company built a second factory to resolve the problem. The former plant now serves as a Tesla Service Centre. The staff provided us with the directions for the second factory and we were on our way! 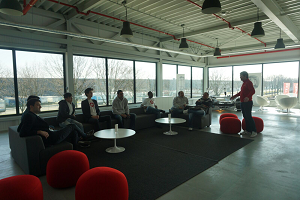 We were greeted by Laurenz Kenning of Tesla. After being served a refreshing cup of coffee, a presentation enlightened us to the history and current progress of the company. The second plant opened in September 2015, with four times the capacity of the previous factory and a total of 14,000 square feet. Currently the plant produces 1,000 cars per day and still has more space in which to increase production.

At present, all Tesla cars combined have saved over 200 million litres of petrol. During the presentation we were amazed by the latest developments and the massive contribution Tesla has made to the automotive industry; they have completely redefined sustainable transportation. We are very proud to be a part of this process by driving Tesla vehicles and showing Europe what electric cars can do!

To better understand the production cycle, it is important to grasp the purpose of the factory in Tilburg. All Tesla car parts are produced in California, USA and transported over land to New Jersey, where they are then shipped to Tilburg. This is where the components are assembled and the cars given trial runs on the largest indoor testing track in Europe. After this they are sent across to the customers at the factory.

At around 2pm we drove to a super charging station close to the factory in Tilburg. Having enjoyed a short lunch we set off on our final stretch to Berlin with our fully charged vehicles. The Tesla Google Maps showed us that we had eight hours to go - including the Super Charging points (270km in 30 minutes) - until we arrived at the designated address in Berlin. Once we crossed over the border into Germany and moved onto the Autobahn, we put the acceleration of the Tesla cars to the test. What a feeling!

Nevertheless, it took us longer than anticipated. This was somewhat our own fault, since we took longer breaks than planned to recharge both the cars and ourselves at each of the Super Charging stations (four in total). In total we drove a distance of 700km in 12 hours, arriving in Berlin at around 2:00am.

The journey so far has taught us a valuable lesson: we realised that self-discipline is key! On day four we are scheduled to travel from Berlin to Turin and will be keeping this lesson in mind.
The big advantage of taking breaks every 200 km is that it allows us to rest; however, sitting in a car for a long period of time is challenging, even with consistent breaks. The only focus is on getting to our next destination in the fastest time possible.

To conclude, we managed the trip well. It showed us how we could improve to become more efficient in the Tesla driving experience and increase the distance in less time. At the last station we broke out in celebration, dancing around the car and playing music before we hit the road one last time to arrive in the German capital. 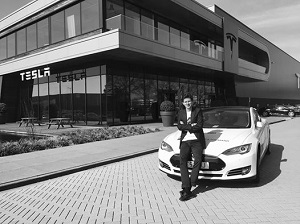