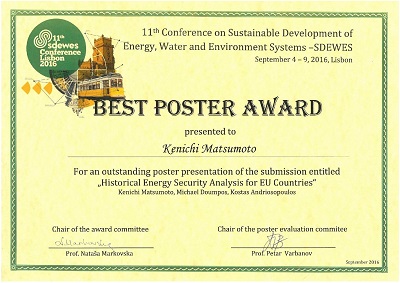 The event took place on 4th-9th September, 2016 in Lisbon. This year conference was dedicated to the improvement and dissemination of knowledge on methods, policies and technologies for increasing the sustainability of development by de-coupling growth from natural resources and replacing them with knowledge based economy, taking into account its economic, environmental and social pillars.

The paper entitled “Historical Energy Security Analysis for EU Countries” was recognised as the best cutting-edge research in the sector, recommended by the award and the poster evaluation committees, for exceptional work in the energy industry.

Congratulations to Kostas, Kenichi and Michael on their success!

This study aims to introduce three novel energy security indicators and illustrate their applicability by presenting empirical results for EU countries. A hierarchical clustering is also applied to further understand the patterns observed in the time-series data. Energy security overall has improved from 1978 to the present. Denmark and the Czech Republic achieved the highest improvements, with the increases being higher for the indicators that consider the origins of energy imports. The clustering analysis identified three main groups of countries: those with high levels of energy security, but modest improvements; those with moderate levels of security, but with higher improvements; and countries that started with very low energy security, but achieved major improvements. Energy security improvements were higher from the late 1970s to early 1980s, but slowed down in later years, peaking up again after 2005, mostly due to the increasing penetration of renewables.