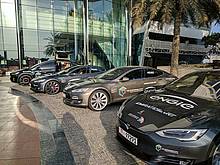 Having supported the Global EVRT project since its inception in 2015 by students on the MSc in Energy Management programme (who formed the ESCP Energy Society), ESCP is delighted to act as sponsor and strategic knowledge partner for the first edition of the Emirates EVRT.

Emily Centeno is reporting each day on the events taking place:

The Emirates Electric Vehicle Road Trip (EVRT) had a successful launch event at the prestigious and iconic Burj Al Arab Hotel, a symbol of modern Dubai with its distinctive sail-shaped silhouette.

The event started with a welcome speech from Ben Pullen from the Global EVRT team and alumnus of the School (MSc in Energy Management, 2015). Also attending were speakers from Engie, The Sustainable City and Emirates NBD, and a special guest, Robert Llewellyn, an EV advocate, well-known British comedic actor, and producer of the Fully Charged online video series about electric cars and the renewable energy market. As a guest on the EVRT, Llewellyn will be filming two or three episodes of Fully Charged.

In the audience were key journalists and representatives from the energy industry, local VIPs and sponsors.

Throughout the morning attendees were able to view various brands of electric vehicles: Teslas, Renaults and Volkswagen cars, electric bikes and more. Several took the opportunity for test drives.

Lunch was served at the Scape Restaurant & Bar and was followed with the first leg of the Emirates EVRT, a drive to Ajman; located on the Persian Gulf, it is the smallest emirate in the UAE. There was a great photo opportunity in front of the Ajman flag pole, before the group hit the road again. We drove on to Umm Al Quwain city centre and checked into the hotel in Ras al Khaimah for our overnight stay, which was also the location for the first ENGIE charging station at the Marjan Island Resort & Spa. This was officially opened by Robert Llewellyn and the members of the Emirates EVRT team, with the inaugural car charging taking place there and then!

The evening saw a Gala Dinner at the hotel, hosting the tour's participants and major sponsors, allowing ESCP to network with participants and showcase its work in Energy Management, Automation and Digital Transformation

It was a vibrant and pleasant evening, and the beginning of a great four-day tour.