After sleeping and meeting up for breakfast, we quickly realised there was a serious problem: Aurora was low on energy, plus the cold night had robbed the car of an additional 10km - this left us with just 18km. We were supposed to be at ESCP Europe’s Berlin Campus at 12.30pm, and there are no Tesla Super Chargers in the city centre. After searching for nearby EV charging stations on our phones, we drove to two Vattenfall charging stations. We were surprised to find they only work with charging cards, which seemed ludicrous and made the charging stations inaccessible. As a result we were not be able to drive all three cars to the Berlin Campus.

Maher found an app called Plugsurfing that mapped all EV charging stations in Berlin. This enabled Ben to get to a pay-as-you-go EV charging station close to our hotel. We had to leave Aurora to charge and, after a little rearrangement, we were back on schedule to arrive at the campus for 12:30pm!

As we arrived at the Berlin campus we were welcomed with a barrage of friendly faces, including a photographer. The focus was clearly on the gorgeous Tesla Model S vehicles, but we would also like to think that they were excited to meet the EVRT team, too.

The Berlin campus is grand and resembles an old German palace with a driveway fit for a king. Inside is equally as grand, and the room used to host our Berlin energy conference had Roman-style pillars and a balcony that circled the whole room. 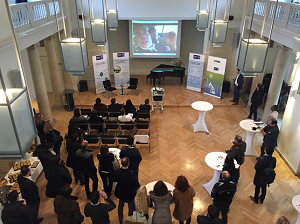 Dr Martin Oetting, an entrepreneur, and Tesla Model S owner, discussed his experience of Tesla ownership. He apologised for sounding like a Tesla representative, but explained that it's hard not to when the driving experience is so great! He also mentioned how proud he was to know that Tesla is creating a movement that allows people to drive fast cars that have a lower carbon impact.

He created enthusiasm amongst the audience, who were clearly itching to try out the Tesla cars. The lunch break provided two options - enjoy the tasty German lunch provided by the Berlin campus, or go outside into the cold and experience the Tesla model S cars. Most people opted for the test driving.

The second speaker, Ivo Hasse, gave a presentation on the 'Energiewende' in Germany. Energiewende refers to the energy transformation that has happened across Germany over the past 15 years: specifically a boom in renewable energies, such as solar and wind, leading to a reduction in the use of nuclear energy. In addition to this there is a controversial need to increase the use of lignite coal as a fuel source for electricity generation. 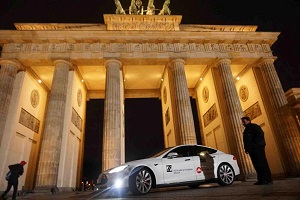 Following the Berlin Campus Energy Conference, the team divided into groups of three. Ben and Afeez attended the City Car Summit 2016 held at the Pullman Hotel in Zoolooischergarten. This was an international conference that brought together engineers and executives from both traditional automotive and new mobility enterprises. Its focus was on new trends: harnessing new technologies and methods to create more urban-ready, shared-use-ready vehicles and auxiliary services.