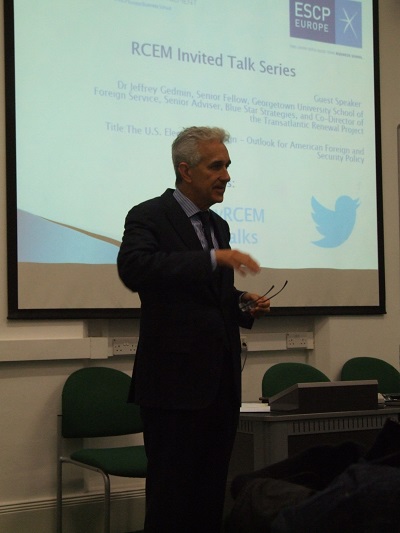 Dr Gedmin began by describing the complex and contradictory nature of US foreign policy. Taking Iraq as an example he asked: was it about oil or weapons of mass destruction? Was it about terrorism or Israel? Was it about human rights or US hegemony in the Middle East? The answer to which, he said, is “Yes”. He said that care must be taken in assessing US foreign policy and people must avoid generalisations because there are so many states and so many people involved.

Comparing democracy in the US with Europe, he said that people perceive Europe as being more democratic, which is true ‘horizontally’ in that there is more choice of political parties for people to vote for. The US, on the other hand, is more democratic ‘vertically’: ordinary people have more of a say and politicians are more beholden to voters – even government buildings, like the Capitol are easily accessed by the public.

This has led to a “crazy” situation so early in the election campaign, with the current leading candidates on both sides representing political extremes and neither of the two Republican front runners, Donald Trump and Ben Carson, even being politicians. For the Democrats, Dr Gedmin said that Bernie Sanders “wants the government to pay for everything, but where’s the money coming from?”.

The early stages of the presidential election campaign have been dominated by these demagogues with very direct, rich and authentic ways to connect with voters, using ‘no dilemma’ messages in response to the public’s sense of anxiety and uncertainty.

As time moves on – and there is a lot of time to go – Dr Gedmin believes the more colourful candidates will fade as voters will tire of the over-simplicity of their messages.  More traditional centre-ground candidates will endure. A Bush-Clinton outcome is not unlikely.

In terms of likely foreign policy responses, when Barack Obama was elected it was on a platform of pulling the US out of two wars, with Iraq and Afghanistan, and focusing back on America. Dr Gedmin believes that the next president will look at the map and see political vacuums in Eastern Europe, East Asia and the Middle East being filled by Russia, China, the so-called Islamic State, and Iran – not countries renowned for their liberal values, prosperity, free trade or the concept of energy security.

People will say that the US cannot do everything, but with allies, it must do more to fill the space and advance Western influence and values towards a more stable, rather than a less stable, world. Dr Gedmin concluded that the new president will have to spend time with European countries as well as Japan and Australia to achieve this.

A lively Q&A session followed the brought out more insights into the USA today:

There is a need to build stronger personal relationships with world leaders than Obama has achieved. This has affected the ‘special relationship’ between the UK and US – but building this sort of relationship has not been a strength of David Cameron in the UK.

On cyber security: “We're 10 years behind: it is daunting but what can we do intelligently? We're chasing. All countries spy!”

On the Chinese desire for influence:"The US will have a robust relationship with China & in parallel strengthen its alliance with democratic countries ... But you knowFrance was one of the toughest parties in the Iran Deal. Iran wants to have more influence and play a major role.”

The evening at the campus ended with a traditional post-event drinks reception, after which the new Executive Master in Energy Management participants headed out for dinner to get to know each other better and make the most of having no assignments that evening.