Brexit: Prospects for a deal

Governments and businesses representatives from various industries have expressed their concerns about the absence of a clearly set framework at this stage. Despite recent progress on the European Union and the United Kingdom talk up chances of securing a deal with the hope to deliver a pragmatic outcome, politicians also plan for a worst case scenario, and advise companies to be prepared for “disruption”.

AS THE GOVERNMENT OF THE UNITED KINGDOM FACES THE FINAL STAGE OF THE BREXIT NEGOTIATIONS, ESCP'S LONDON CAMPUS PROUDLY SUPPORTS THE BREXIT FORUM SERIES – AN EXCLUSIVE MEMBER-TO-MEMBER EVENT ORGANISED BY THE FRENCH CHAMBER OF COMMERCE IN GREAT BRITAIN (CCFGB). 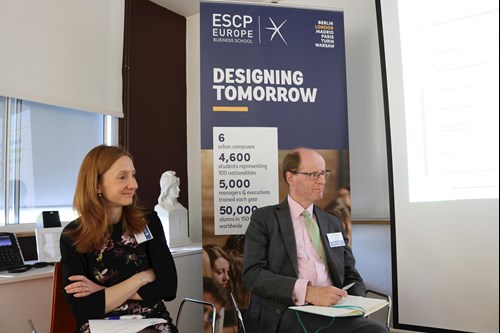 On 31st October 2018, CCFGB members and organisations from the retail, finance, healthcare, legal, energy, consulting, tourism, transport and banking industries came together to discuss the latest on the impact of Brexit, the UK Government’s real prospects for a deal, and the potential impact on the UK economy.

Attendees reflected on the current stage of the negotiations, whether the existing agreements in place such as: EEA, EDA (adopted by Norway, Switzerland, and Finland) can be embraced by the UK, the transition period required, and recommendations given by the French government.

The full report on Brexit and its impact on business done by the French Government and kindly provided by the French Embassy in London is available here.

The next session will take place on 27th November. For more information, visit the Forum’s website.