Madame Nicole Fontaine: a passion for Europe until her last breath 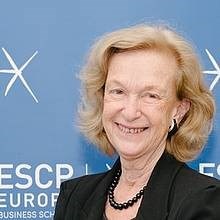 A great figure of Europe has just passed away. The European flame will last, thanks to her commitment, throughout her life.

Nicole Fontaine was a woman and a friend who always carried and fostered the values of Europe deep within her.

Like Europe, the roots of Nicole Fontaine were Christian. She once was assistant secretary general, and delegate for Catholic Education in France. The subject of her PhD thesis in public law was private confessional education under contract with the state in France. It became a reference research work, and was published four times.

Like Europe, Nicole Fontaine’s life took a political turn. First as an MEP, then as the President of the European Parliament, the second woman to hold the position. Her European commitment continued even after her appointment as French Minister for Industry, when she resumed her mandate in Brussels. Her political struggle for Europe was extended by her career as a lawyer, helping French companies integrate European standards to better carry out their ventures. As a true visionary, she perceived at a very early stage the multiple and entangled facets of the Brexit. A few days before the British referendum of June 2016, she published, with François Poulet-Mathis, Brexit, an opportuniy?, a premonitory work on the post-Brexit period. A courageous assessment, for which her enthusiasm caught the European students she gathered to work on the subject. She took the view that the departure of the British from the European Union could be an opportunity for the relaunching of Europe and the beginnings of a new phase in British-European partnership set to mutually satisfactory terms.

Finally, like Europe, Nicole Fontaine shared the ambition to transmit knowledge. She was very committed to education and passionate about teaching European institutions, as shown by her involvement in the design of an ESCP seminar where all students accompanied her every year for a full-scale simulation at the European Parliament. Under her benevolent authority, they worked on concrete issues such as the Posted Workers Directive, or gender equality on company boards.

Just a few weeks ago, we would still come across her, meeting with Hans-Gert Pöttering, her predecessor in the European Parliament, or in a classroom surrounded by students excited about co-writing a new book. In an interview for Europe Day, on 9 May, she continued her commitment to youth by supporting the proposed Erasmus for apprentices programme.

The realm of higher education could not be not touched by the elegant knowledge she knew how to transmit. Already the holder ad personam of a Jean Monnet Chair, I had awarded her the insignia of Doctor Honoris Causa in 2017 at ESCP.

Throughout her life, she was driven by "how to rebuild and re-enchant the European dream", in order to build a Europe of citizens. This conviction led her to constantly endeavour to defend youth, associative life, mutual recognition of diplomas, and freedom of establishment throughout the European Union.

Dear Nicole, at a time when Europe is paying tribute to you, let us remember the courage of your convictions and the passion of your commitment. I wish to thank you for all you have generously given to Europe and to each of us, European citizens.

Professor Frank Bournois,
Dean of ESCP where Nicole Fontaine was an Affiliate Professor