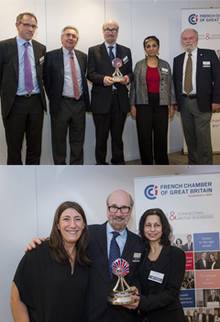 ESCP Business School is proud to announce that it is this year's winner of the Franco-British Intercultural Trophy, awarded at PwC's headquarters in London on Thursday 5th February 2015.

The Franco-British Intercultural Trophy has been awarded by the French Chamber of Commerce in Great Britain since 1997. The trophy, designed by Cartier, is presented to companies which have made particular efforts to develop stronger ties between Britain and France or to promote Franco-British cross-cultural relations. The winner is elected by all the Members of the Chamber.

This year, the 18th edition of the Intercultural Trophy, sponsored by AXA, was awarded during a Cross Cultural Quiz Evening on February 5th at the PwC Offices.

This year's candidates were:

Professor Halliburton said: "We are genuinely thrilled at winning this award and honoured to join the distinguished roll call of former winners, especially as the first educational establishment. The trophy represents for us a great success in working across cultures wherever ESCP is located, particularly in Britain where our students and workforce are truly international."

Established in 1819, ESCP is the world's oldest business school and has educated generations of leaders and entrepreneurs.

With its five urban campuses in Paris, London, Berlin, Madrid and Torino, ESCP's true European Identity enables the provision of a unique style of cross-cultural business education and a Global Perspective on international management issues.

ESCP's network of 100 partner universities extends the School's reach from European to worldwide. The School is founding partner of heSam, a cluster of well-known institutions for research and higher education structured around the Sorbonne University.

Triple-crown accredited (EQUIS, AMBA, AACSB), ESCP welcomes 4,000 students and 5,000 executives from 90 different nations every year, offering them a wide range of general management and specialised programmes (Master, MBA, PhD and Executive Education). The School's alumni network counts 45,000 members in 150 countries and from 200 nationalities. Together with its long-standing relationships with national and multinational companies, this network allows ESCP to provide unique career opportunities on an international scale.

The French Chamber of Commerce in Great Britain is part of a network of 112 French Chambers of Commerce and Industry Abroad (CCI France International), which is the largest private French network in the world with a combined membership base of more than 30,000 companies.

The largest Foreign Chamber in the UK today in terms of both turnover and range of services offered as well as one of the top French Chambers worldwide, it counts more than 600 member companies - ranging from SMEs and entrepreneurs to blue chip companies. The diversity and quality of its members - 40% of which are non-French nationals - largely contributes to its success and to the reputation it has acquired over the last 131 years of existence.