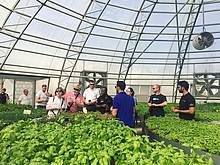 The third day of the Emirates EVRT started with an early morning - we needed to prepare to open another charging station, this time at the Novotel Hotel in Fujairah!

It was officially declared open by ENGIE, one of the main sponsors of the EVRT, and Wiebe Walker from the Plug Me In project. Wiebe joined the Emirates EVRT during his own road trip, in which he was driving all the way from the Netherlands to Australia by electric vehicle.

With the new charging station ready for public use, we made our way to the Sustainable City in Dubai. This impressive initiative was created with the intention of being the first net zero Energy community in Dubai, and the even greater ambition of helping to transform Dubai as the most sustainable city in the world. It features a large residential area of 500 townhouses, banks, clinics, a souk and community centre, plus an incredible natural bio-dome greenhouse, organic farm and smaller garden farms. The team were lucky enough to take an extensive tour around the City and learn about its projected growth. A fascinating experience!

The next leg of the EVRT took us to the Sofitel Corniche in Abu Dhabi for another charging station ribbon cutting. With plenty of journalists and local residents attending, there was great demand for test drives in our fleet of vehicles and some fabulous photo ops for car enthusiasts.

The day closed with a gala dinner, giving the EVRT's founder Ben Pullen plenty of time to personally thank many of the trip's sponsors, including ENGIE, Renault Middle East, Emirates NBD, The Sustainable City, AXA Insurance, L'OCCITANE en Provence, Live'ly Express, Careem, AccorHotels Group, Dubai Carbon Centre of Excellence, and of course ESCP. Many sponsors took the opportunity to speak directly to all the guests; Prof. Simon Mercado and Prof. Kostas Andriosopolous of ESCP were delighted to take the opportunity to present the ESCP European EVRT, a 14-day event which will run from 25th April 2017.

Ten luxury Teslas will visit four of the School's six European campuses, covering at least 4,000 kilometres. During each city stop there will be a range of conferences and events, and of course plenty of chances to test drive an EV for yourself.

The dinner came to a close with a talk from Wiebe Walker. He shared tales from his Netherlands-to-Australia journey so far, as well as his future EV-related plans. His insight was invaluable to the EVRT team as they prepare for their second European expedition.