Recent intense bellicose rhetoric and sabre-rattling between India and Pakistan has raised the stakes in the completion of the much-heralded Turkmenistan-Afghanistan-Pakistan-India (TAPI) natural gas pipeline project. An unnamed official of the Indian government dismissed suspicions that the US$9-billion project could be either postponed or shelved indefinitely due to flaring animosity. 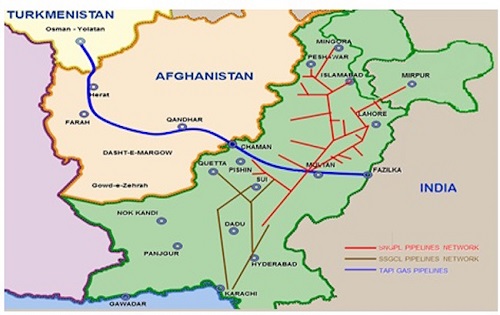 The current round of open and covert hostilities was provoked by a terrorist attack on an army camp at Uri on September 18 and another one at 46 Rashtriya Rifles camp in Baramulla on October 2. The attack in Uri located in India-administered Kashmir was carried out by a radical grouping called Jaish-e-Mohammed (JeM) that is allegedly linked to Pakistani intelligence services and reportedly responsible for a similar attack on a military base in the town of Pathankot in the Indian state of Punjab in January this year.

The response in India to the latest strike was as emotional as ever. A video placed on social media featured an Indian serviceman who calls out cities in Pakistan that would face total obliteration. Then he is joined by fellow soldier that chant a poem with provocative refrain: “Pakistan, hear this loud and clear: If … war breaks out you will be obliterated. Kashmir will exist but Pakistan won’t.”

Indian media was full of angry voices calling to “cripple” Pakistan and “bring them down to their knees”, and actually calling for an all-out war: “Let guns now talk with Pakistan.” BJP party prominent executive, Ram Madhav, posted on Facebook a dire warning: “For one tooth, the complete jaw. So-called days of strategic restraint are over” – thus upping the ante in the long-time rivalry and enmity.

The Pakistani officials wasted no time as well to declare readiness to get involved in another brawl with neighbours. Army Chief Raheel Sharif beefed up morale of his officers and rank-and-file soldiers by stating that Pakistan was “fully prepared to respond to the entire spectrum of direct and indirect threats” from India. He pledged that Pakistani army would defend “each and every inch” of the country “no matter what the cost.”

Both sides are used to trading accusations. Islamabad claims New Delhi is conducting a secret war by having forged an alliance with Taliban and aiding the separatists in Balochistan, the Baloch Liberation Front (BLF). Although there was hardly any hard-core evidence that attacks carried out by Baloch militants were sponsored or assisted by India, Pakistan is convinced that India must have had a hand in the subversive activities of its sworn enemies, because otherwise it would not fit the scheme.

As a matter of fact, as Indian journalist Shivam Vij revealed, there is no proof that the attack in Uri was related to terrorists sponsored by Pakistan’s intelligence services. Yet, the Indian government would not like to drop its accusatory tone. However, India should be given credit for avoiding call for an immediate retaliation. Law Minister Ravi Shankar Prasad announced that New Delhi’s response “will be done with full diplomatic and strategic maturity.”

No doubt, “strategic maturity” is a factor to be taken into account but two neighbouring countries have a poor record of squabbling. They fought three wars over the disputed territory of Kashmir prior to 1998. In 1999 they were engaged in two-month hostilities until Pakistani troops retreated from the infiltrated terrain.

The aftertaste of the recent outburst of animosity will last long enough. Noteworthy, speaking at Brussels Conference on Afghanistan on October 5, 2016, Mobashar Jawad (M.J.) Akbar Indian Minister of State for External Affairs, accused Pakistan of hindering trade between India and Afghanistan. “We have offered a special facility at our border at Attari for Afghan products coming to India via Pakistan. Unfortunately, this access has been blocked for political reasons by Pakistan. Nations cannot become walls aborting a trade and culture that is as old as written history, and as powerful as the lore etched in common memory,” M.J. Akbar intoned.

Minister has also praised his Prime Minister Narendra Modi’s “neighbourhood first” policy and called Afghanistan “the wedge between East and West, the passage for seamless travel between India and Central Asia, West Asia and regions beyond.”

The divisive rhetoric cannot heal wounded pride, especially since the warring sides stubbornly reject the idea of bringing on board peacemakers from a third party. It goes against the global trend.

The institute of moderators can be imperfect but it fairs better than attempts to patch a dramatic schism by parties divided by past grievances and emotional animosity with a track record of deep suspicion, prejudiced attitude, fallen soldiers and maimed civilians.

Here is a recent argument in favour of third party peacemakers. In September, the government of Colombia and the leftist guerrilla group, the FARC, have ended a 50 years-old civil war that caused more than 220,000 deaths leaving 8 million homeless. Cuba, Venezuela, Norway and Vatican jointly played a crucial role in sponsoring the four-year-long talks with the UN and now international observers are put in charge of overseeing peace and the pacification of the war-torn nation.

Could it a model for India and Pakistan? Unlikely. The permanent squabbling has already derailed a quite sensible project: construction of a pipeline connecting Iran, India and Pakistan (IPI). The last meeting to address the issue was held back in 2008 with no progress recorded ever since.

And yet, surprisingly, TAPI might materialize against all odds. To remind of it proposed properties: Annual throughput capacity to total 33 bcma. Total length: 1,814 kilometres (214 km along the territory of Turkmenistan, 774 km across Afghanistan, and 826 km stretching across Pakistan to the border with India. According to original plan, the pipeline might be put on stream in late 2019.

On September 30, Turkmenistan’s President Gurbanguly Berdimuhamedov examined the construction sites of the Turkmen section of TAPI and must have approved the official report that affirmed: pipeline’s construction is in line with the schedule.

The motives of these formidable lobbyists have the same roots as the reluctance of New Delhi and Islamabad to abandon the project. Experts’ forecasts point out that by 2030 the demand for natural gas in India and Pakistan will surge twofold. The Turkmen connection, at least for the moment, looks like the best option, provided, first of all, the unproved reserves of this country are as huge as it is widely believed. And second, China, as the main purchaser of Turkmen gas, does not get jealous and stand in the way.