Crude oil prices have declined by 58% from June 2014 to January 2015. This sharp negative departure from trend takes place three years after the 2011 collapse of gold prices and the start of the commodities´ bear market which has seen an overall reduction of commodity prices by 46% per cent.

The crude oil market had a sustained pre-crisis run-up in the prices prior to a historical collapse in the midst of the crisis in 2008. The post-crisis data indicates that crude oil enjoyed an important price run-up in 2011 that was then reversed by a downward price adjustment. WTI crude oil prices have since the autumn of 2011 oscillated around the $100 level and traded at very low volatility levels. The downward trend in volatility was reverted last summer when a sharp collapse in prices placed the CBOE crude oil VIX, the volatility measure based on WTI options US fund, to a multiyear high, reaching levels not seen since the 2008 crisis. Fig 1 plots daily WTI front month futures price levels and the CBOE crude oil VIX which measures the expected volatility of crude and is the benchmark for the degree of risk aversion in the crude oil perceived in the market. A close inspection of the graph shows that the three most significant downward crude oil price adjustments seen over the last decade have been accompanied by a dramatic rise in CBOE oil volatility. Indeed the correlation coefficient between front month daily NYMEX WTI crude future prices and the CBOE crude oil VIX over the past eight years is equal to -0.55. This underlies the strong relationship between volatility and market performance. Volatility tends to decline as the market rises and increase as the market falls. When volatility increases, risk increases and returns decrease. During the recent crude oil price collapse, the CBOE Implied crude oil VIX has moved from an all-time low of 15% in the spring of 2009 to a six year maximum on February the 5th indicating that traders remain in panic and at edge about the market. An important question that arises is the extent to which forward looking volatility measures market fundamentals, which we assess by looking at crude oil´s tem structure of prices.

The recent sharp fall in crude oil prices has led to a shift in the term structure which moved in November 2014 to "contango" which implies that prices increase with the time to delivery. Contango market structures typically arise in periods of excess supply in the market. The current supply glut (which mainly arises due to the rapid growth in US shale production and the refusal of OPEC countries to cut crude oil production) has placed US stocks at their highest level in 80 years. As the theory of storage predicts, when inventories become high, the futures structure moves to "full carry" and convenience yield approaches zero. The convenience yield is the formal counterpart of the dividend yield in storable commodities which is the implied value of any benefits (net of insurance, deterioration and storage costs) that accrue from holding inventories of the commodity. When commodity markets are in excess demand, the term structure of commodity prices decreases with time to maturity, a as a result of positive convenience yields. This structure is known as market "backwardation." The extent of backwardation or contango can therefore be used as a measure of fundamentals in commodity markets.

The financial literature (see Litzenberger and Rabinowitz 1995) documented that crude oil markets have been in backwardation 70% of the time. Using data of one month and four months daily WTI NYMEX futures prices from 2007 up to the current time we see that the markets have been in contango 70% of the time, which implies that falling prices regimes have dominated increasing pricing regimes over the crises and post crises years.

The recent collapse in crude oil prices has placed the current level of contango on a three year high reaching levels not seen since 2011 and 2009. An interesting feature for market participants is that there is a positive relationship between the CBOE crude oil VIX index and the degree of contango in the US crude oil market, as measured by the difference between four month prices and the front month NYMEX future prices (see Fig 2). The correlation coefficient between both series (which measures the extent to which two random variables move in unison) is 0.57 suggesting that the crude oil forward looking volatility provides information on the commodity price fundamental, beyond crude oil investor´s financial risk. 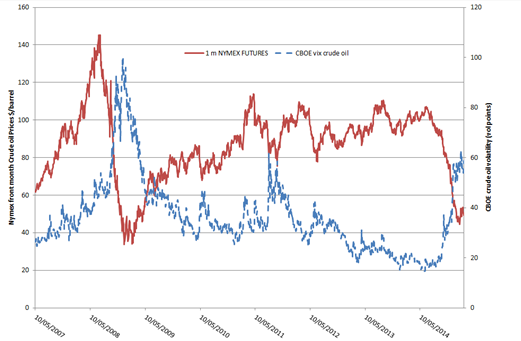 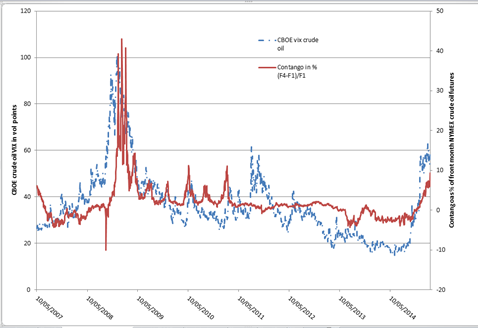