Increased price and supply risk in the British gas market this winter suggest a need to further diversify sources of gas supply. The UK does not need to look far however, as homegrown shale gas is a way to lessen the risk premium on gas in future winters.

Before discussing shale gas, it is worth examining the situation the UK faced regarding gas prices this winter. According to broker prices compiled by Bloomberg, the first two weeks of February witnessed the highest price swings in day-ahead gas, as measured by 30-day historical volatility, since fall 2009, with price swings more than tripling over that period (Brown and Farey, 2012). Strong Asian natural gas demands and cold weather which strained on-hand gas supplies had no direct effect on consumers during this two-week period, but it certainly complicated energy utilities' efforts to supply electricity at stable prices. 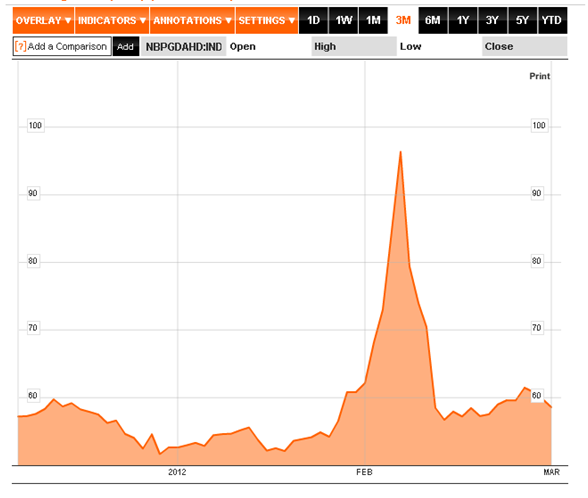 Looking ahead, other factors can influence near and mid-term risk.  First, the UK relies heavily on LNG from one source country. Qatar supplied 85 percent of the UK's LNG last year and over 95 percent during the last quarter of 2011 (DECC, 2012). In fact, all but two LNG cargoes shipped to the UK last year came from Qatar; thus, Iran's threat to close the Straits of Hormuz and tensions in the Persian Gulf region have the potential to negatively influence the price and supply of gas in the UK. Further, Deutsche Bank analysts report that only 24 percent of UK-bound Qatari LNG is secured under fixed contracts, thereby increasing the risk of diversion to a higher international bidder (Hoyos and Chazan, 2012). And this is certainly in the realm of the possible with surging Asian natural gas demands, a situation compounded by Japan's increased gas needs following last March's Fukushima disaster.

Second, UK gas production has been declining since 2000 by an average of 6 percent annually - and there is no end in sight (DECC, 2011). Domestically-produced gas provided over 95 per cent of Britain's supply 10 years ago; soon it will support less than half of its needs (Moore and Less, 2012).

Finally, the UK possesses limited gas storage capacity to provide the seasonal "swing" supply flexibility that previously resulted from high levels of domestic production (HCECCC, 2012). In fact, Britain has just 14 days of gas storage capacity, compared to 59 days in Italy, 69 in Germany and 87 in France.

As part of a comprehensive energy policy, the UK can begin developing a domestic shale gas production sector. Forecasts of potential shale gas in the UK vary, but estimates suggest there are sufficient amounts to address British needs for several years. The British Geological Survey estimates that the UK's shale gas reserve potential could be as high as 150 billion cubic metres (bcm) (HCECCC, 2011). The US Energy Information Agency projects that the UK has 560 bcm (20 trillion cubic feet) of technically recoverable shale gas (EIA, 2011). And industry estimates are even higher.

To date, environmental issues and concerns about the effects on local communities have delayed developing this promising industry and it has been difficult to move beyond the negative externalities associated with shale gas. Controversial fracturing techniques that break up shale and free the gas, injection of chemicals as part of the fracturing process, fear of contaminating water supplies, concerns over the large amounts of water used in fracturing, disagreements over the amount of green house emissions emanating from shale, and low-level seismic activity associated with shale drilling have been at the center of these delays.

Concerns surrounding shale gas should not be downplayed (though many have proven unfounded), but they can be mitigated through proper regulatory protocols and education.

In the US, shale gas revolutionized the natural gas industry. This will likely not be the case in the UK, but that should not delay moving ahead with domestic shale production. Development of a viable shale gas industry will take several years - and the current oversupply of gas in Europe, combined with recent cuts in household energy prices militate against tackling gas supply and price risks - but delays in adding domestically produced shale gas to the UK's energy mix only increase the risk of future supply disruptions and price volatility.  Now is the time for the UK to begin developing its promising shale gas industry - not later, during a time of price or supply crisis, when it is too late to help provide for the country's energy needs.