What are the most likely repercussions for South East Europe’s energy security after the somewhat ambiguous reconciliation between Ankara and Moscow has re-activated the Turkish Stream pipeline project? Will it challenge the EU energy directives? Will it drive another wedge into the alliance of nations loyal to the concept of an ‘energy union’ and undermine solidarity? Does it really matter or it is not worth consideration? Is it a challenge or an opportunity? 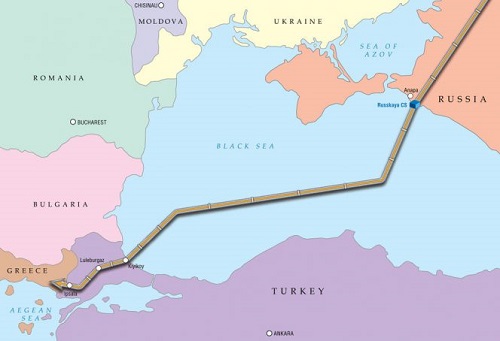 For the moment, the implementation of the project stepping into the shoes of the defunct South Stream is far from being ascertained. Yet, pre-emptive review is appropriate. Should the Black Sea offshore infrastructure materialize, even in its current scaled-down design, it might impact the breakdown of energy imports of the south East corner of Europe having negatively affected the prospects of Azeri pipeline gas deliveries as well as Qatari and US-shipped LNG.

The re-emergence of Turkish Stream on the agenda came as a bit of a surprise. The downing of a Russian Su-24 military airplane by the American-built Turkish Air Forces’ fighter has led to bi-lateral relations nose-diving to a historical low. The usual SWAT analysis suggested that the ‘personalization’ of politics in both countries where the two leaders, Erdogan and Putin, lean toward a heavy-handed style of governance, would prevent Turkey and Russia patch up the quarrel soon enough, and it would have a long-lasting effect for the regional affairs and, in particular, the geo-politics of energy.

Right after the shooting of the Russian jet that violated the Turkish air space for 17 seconds, political contacts were immediately frozen. Infuriated Kremlin introduced a plethora of economic sanctions. Moscow has hit hard Turkish construction companies operating in Russia with contract’s portfolio worth more than $10bln, barred Turkish food products from domestic market and banned charter flights thus drying out the steady tourist flow (some 3,5 million Russians vacationed at Turkish sea resorts in 2015).

The retrospective survey of the routinely turbulent relationship between Turkey and Russia, which have fought at least 10 wars throughout history, leaves no surprise that their continuous attempts to establish a more or less conflict-free cooperation in the strategic areas have seen many ups and downs.

However, it was a conspicuous sign that neither side wished to rupture the fabric of the lucrative interaction on the energy dossier: Neither the Akkuyu NPP to be constructed by Russian Rosatom in the Mersin province, nor the Turkish Stream, spearheaded by Russian Gazprom, was ever mentioned by Moscow as a possible target of punishment. All throughout the seven months of the mini Cold war between the former time-honoured adversaries, responsible energy-related officials in Ankara and Moscow carefully avoided sounding a death knell for the mega projects.

A Turkish analyst, Hakan Aksay writing for T24 Yazarlari while noting that Moscow did not consider closing down its embassy and rupturing diplomatic ties emphasised that interaction in the energy sector, crucial to both countries - Turkey is the second largest purchaser of Russian natural gas right after Germany, was low-key but not abandoned even in the months following the incident.

For Turkey, the rationale of welcoming Turkish Stream is evident. First of all, the on-going campaign in the European Union to diminish the dependence on Russian gas, which has been on top of the agenda for almost a decade, has not convinced policy-makers in Ankara that the end-result equals a viable substitute to Gazprom’s gas. This viewpoint is supported by local experts’ community.

For instance, in the wake of the cool-off of relations with Russia, Necdet Pamir, expert on energy policy who lectures at Bilkent University in Ankara, and, as a matter of fact, who is a staunch critic of the government’s flirtationship with Gazprom, analysed the options for Turkey to source gas from alternative purveyors.

Currently, in Turkey “there is no infrastructure - whether an existing pipeline or LNG facility - available to import “alternative” LNG from Qatar or import “additional gas” from Azerbaijan or “non-existent” gas from the northern region of Iraq”, Pamir concludes.

Moreover, the LNG option for Turkey is more than simply wishful thinking, intones Pamir evaluating the option of Qatari LNG supplies. Pivot to Qatar is hardly compatible with the cash-strapped budget since it would “seriously overburden Turkey's already fragile economy, since it would be significantly more expensive than Russian gas. Poland is a concrete example: It tried to diversify away from Russian gas and turned to Qatar as an option but was frustrated by the ultra-high price.”

The second motive of the Turkish leadership is rooted in the fear that after 2019 gas transit across Ukraine would be either halted altogether or significantly curtailed by Gazprom. Part of the imported gas volumes Turkey receives through a segmented pipeline network running across Ukraine as well. The dense uncertainties over the outcome of the crisis in Ukraine adds to the inclination of Ankara ‘to play it safe” and ensure a troubles-free delivery of Russian gas. Besides, in case of direct deliveries across the Black Sea there would be less tariff fees to be paid to transit countries, and subsequently Gazprom could be pressured to lower the final price of gas for the Turkish wholesale purchasers.

So far, Ankara envisages the construction of only one string of the pipeline, which is enough to substitute the current deliveries across the Ukraine-Romania-Bulgaria route and complement gas flowing through the Blue Stream pipeline. It is far less than the recently discussed plan to ship 32 billion cubic meters per annum (bcma).

Apparently, it is also a pale copy of the original grandiose ambition of the South Stream project envisaging four strings with a throughput capacity of 63 bcma. The cautious approach taken by Ankara is a reflection of the dire state of understanding between Turkey and the European Union. It is also the strong echo of the EU opposition to South Stream, which finally derailed the endeavour.

Nevertheless, the rapprochement of this summer might be treated as a game changer. What’s more, European and Turkish media have taken due notice of the letter sent by the President of the European Commission Jean-Claude Juncker to Bulgaria’s President Boiko Borisov. The head of the EC renders words of support for the concept of the Balkan gas hub in Bulgaria and does not exclude the deliveries of new gas supplies from Russia “provided it is in full conformity with the EU regulations.”

Noteworthy, immediately after, Borisov placed a telephone call to Kremlin, informed Putin of this new flexible stance taken by the European Commission and reminded that Bulgarian sea ports of Varna and Burgas have the stockpiles of pipes originally placed there to build South Stream. Later, Kremlin’s spokesperson said Moscow does not pit Turkish Stream against South Stream, and both have the right to be properly considered (and implemented?).

The offshore pipeline across the Black sea could “branch out” in two directions with one string going to Turkey and the other to Bulgaria, Aleksei Grivach, Deputy Director of National Energy Security Fund (Moscow), commented on the news. The second string would end up on the seashore of Bulgaria, that means in the European Union.

At present, according to Grivach, the EU might be reluctant to receive gas from Turkey serving as a transit hub because it would give Ankara to much leverage on energy supplies’ issues. This is probably the reason why Brussels has fine-tuned its position on the re-incarnation of South Stream landing in Bulgaria.

If these factors eventually prop up the project of a westward bound seabed pipeline, then Turkish Stream and probably Bulgarian Stream, or whatever name is bestowed on it, should not be dismissed as a phantom from the closet. Since Turkish Stream has discovered life after coma, at least on paper and in public pronouncements, it would be expedient to take these developments into account when forecasting South East Europe’s energy security.