HOME / VIEWS ON ENERGY NEWS / THE OPEC DEAL: A LEAP OF FAITH

The OPEC Deal: A Leap of Faith

For the first time in eight years, the Organization of Petroleum Exporting Countries (OPEC) has decided to cut crude oil production to bolster the oil price having suffered huge losses since the collapse of the oil price in July 2014.

The continued weakness of oil prices has inflicted a huge damage on the global economy, the economies of the oil-producing countries and global investments. There has been a loss of 0.75%-1.00% annually in global economic growth since 2014. Investment in upstream exploration from 2014 to 2020 is projected to be $1.8 trillion less than previously assumed, according to leading US consultants IHS. The Arab Gulf oil producers have lost an estimated $443 bn in oil revenues between July 2014 and December 2016. And the US shale oil industry took a major blow by losing some 1.5 million barrels a day (mbd) of oil production and also risking major defaults on the $200 billion in loans that have been extended to the domestic shale oil industry.

It was only back in January this year that the price of a barrel of crude tumbled towards $27 and some analysts forecast that it could reach as low as $10. There was joy among western leaders who dared to believe that the era of stellar economic growth that characterized the 1990s, fuelled as it was by super-low oil prices that rarely pushed above $20/barrel, was about to return. But a long run of ultra-cheap prices was not to be.

Exactly two years after Saudi Arabia, the de facto leader of OPEC, coaxed its fellow OPEC members into letting market forces set the oil price, it has performed a volte-face. On November 30th it led members of OPEC in a pledge to cut production by 1.2 mbd, if non-OPEC producers such as Russia chip in with a further 600,000 barrels a day (b/d). That would amount to almost 2% of global production.

The OPEC deal was a positive step towards bolstering the oil prices but it fell short of the minimum 1.5 million barrels a day (mbd) needed to eliminate the glut in the market estimated at 1.5-2.0 mbd. However, when you add the agreed cuts by the non-OPEC producers of 600,000 b/d of which Russia has agreed to contribute 300,000 b/d, it then goes a long way towards eliminating the glut. But all depends on the good faith of the OPEC and non-OPEC producers abiding by the deal. The cut is an effort to put a $50-a-barrel floor under the oil price and push it towards $60 a barrel within a few months.

The deal was achieved because of three factors: first, all the OPEC members and Russia have been suffering badly from the steep decline of the oil prices since July 2014; secondly, Saudi Arabia wanted the deal; and thirdly, OPEC needed some success to show the world that it still matters and has not become irrelevant.

The deal also signals a major U-turn by Saudi Arabia. Since the end of September, when OPEC sketched out a deal in Algiers to cut production, Saudi Arabia’s oil minister, Mr. Khalid Al Falih, and his Iranian counterpart, Bijan Zaganeh, had engaged in a game of brinkmanship that at times seemed likely to doom this meeting (see Photo). Oil prices have staged frenetic swings since then. Days before the Vienna meeting, some analysts gave it less than 50% chance of success. The betting was that failure would push prices below $40/barrel and possibly bring about the collapse of OPEC. 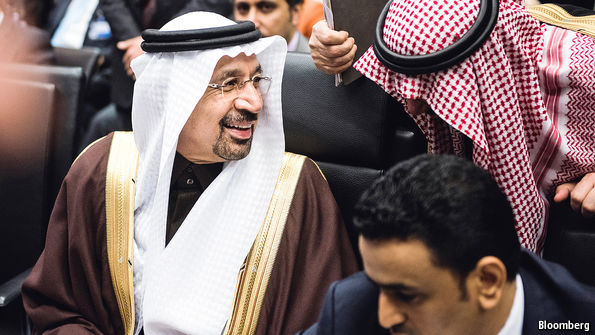 But Saudi Arabia realized that pragmatism was its best option. Its 4.6% production cut is mirrored by many other OPEC members, though Iran was permitted a token increase as it recovers from nuclear-related sanctions. That may be galling for Saudi Arabia, but it is likely to benefit far more than Iran from the rise in oil prices, if sustained, than it will lose from lopping 486,000 b/d off its total output. While it is a small step of understanding between the two rivals, it could lead to some lessening of political tension between them in Syria, Yemen and the Gulf region at large. Nigeria & Libya were both exempted from the cuts because of their domestic political troubles.

Moreover, the Saudi government’s plans to modernize the economy and partly privatize the state oil company, Saudi Aramco, depend to some extent on higher oil prices. The kingdom needs higher oil revenues as a “bridge” to a less oil-economy.

The new OPEC deal could usher a new era of relatively higher oil prices. However, OPEC doesn’t hold all the cards even after its oil price deal. It is more likely that a $60/barrel cap will emerge. However, the longer-term impact on prices will depend on the implementation of the accord and discipline in sticking to it.

A history of OPEC members not abiding by their production quotas in order to improve their revenues – by pumping more oil in contravention of production cuts – could undermine efforts to cut output. OPEC said it will establish what it referred to as a “high-level monitoring committee” to monitor the implementation of the agreement.

The cuts will take place from January 1st, 2017 and will last for six months. During that time, traders will monitor oil-tanker traffic to ascertain whether fewer are leaving port. They can’t monitor Russia’s pledge to cut 300,000 b/d of production, because much of its production moves by pipeline. But even so the agreement will start to cut global oil inventories next year aided by the fact that non-OPEC output has fallen this year, thus adding impetus to OPEC’s efforts. Bloomberg calculated that OPEC members’ compliance with the deal could cut the developed nations’ stock of crude by the third quarter of 2017 to 56 days of forward demand from the current 65 days.

Commodity watchers also believe the deal will set up a long-awaited rebalancing of the global oil market in the first half of next year. The market has been oversupplied for more than two years by as much as 2 mbd.

If oil prices continue to rise, US shale oil producers will ramp up output, in effect capping the oil price. This may not happen as swiftly as some think. After all, there are suspicions that, to coax Wall Street investment, shale producers have exaggerated their ability to produce low-cost oil. Last month, US shale oil production has gone up by about 200,000 b/d. If it goes up much higher and begins to affect prices, US frackers will find themselves on the receiving end of OPEC and Russian punishment again as OPEC and Russia try to make up for falling oil prices with more production.

And whilst many see oil prices averaging between $50 and $55 a barrel next year, analysts are not united on the path to that level. Goldman Sachs believes the deal will cause oil prices to spike in the first half of 2017 and then moderate in the second half as both OPEC and US shale producers capitalize on the rally. But J.P.Morgan sees prices rising slowly but steadily quarter after quarter. The bank cautioned that the deal is essentially aimed at preventing an even larger build-up of oil stockpiles.

Demand for oil worldwide is projected to increase by 1.4% or 1.5 mbd in 2017, a rate of growth that would match this year’s. Aided by growing global demand for oil, I project that oil prices could hit $60/barrel by the end of this year or early next year. I would not be surprised if the oil price hits $70/barrel by the second quarter of next year.

If the current price doesn’t stick, OPEC members and Russia will not make the promised cuts. For OPEC and Russia, it is a matter of finding a balance between the real-life cuts necessary to maintain market faith in a supply reduction and the price effect these cuts continue to have. If the effect is smaller than needed, the oil producers will make up for it by pumping more oil as they have always done in the past.