HOME / VIEWS ON ENERGY NEWS / A SUPER OPEC IN THE OFFING?

A Super OPEC in the offing?

Russia’s cooperation with OPEC has led to the OPEC/non-OPEC production cut agreement credited with virtually rebalancing the global oil market and pushing oil prices towards almost $70/barrel and also putting a $60 floor under oil prices, up from $50 in 2017.

Russia and Saudi Arabia, the architects of the production cut agreement made it clear that the agreement will go beyond 2018 but in a format that reflects the changing market conditions such as a rebalanced market and rising oil prices. After all, both Russia and OPEC face a major rival: US Shale. It looks as if Russia could become a member of OPEC in all but name.

OPEC and Russia are looking to create a “super group of oil producing countries” or a “Super OPEC”. The move would institutionalize the framework that has been in place since the first of January 2017, when OPEC, plus a group of non-OPEC oil-producing countries led by Russia, cut output by a combined 1.8 million barrels per day (mbd) in support of oil prices.

Saudi oil minister Khalid al-Falih said that he hopes that OPEC can relax the production limits next year, while putting in place a more permanent framework for cooperation between OPEC and the non-OPEC countries that are participating in the deal. “An assessment of the global oil market is taking place and once we establish that the market has become rebalanced, the next step may be easing of the production constraints,” al-Falih told reporters in New Delhi. He went on to add that a longstanding cooperative agreement is a priority. “What we want is a framework that brings producers from OPEC and non-OPEC countries together in a market monitoring fashion that allows us to take quick decisions,” he said.

The objective behind the idea of creating a Super OPEC is to maintain cooperation between Russia and OPEC and also production discipline even when the global oil market is completely rebalanced. The fear has been raised that participants in the production cut agreement would return to producing flat out, ramping up production in a short period of time, a spectre that threatened to crash oil prices all over again. OPEC members and Russia don’t want a repeat of the 2014 oil price crash ordeal.

A “Super OPEC” would offer an institutional framework to manage the oil market post-2018. They hope to create a draft proposal before the end of the year. The draft would be signed by all 24 participants by the end of 2018 according to the UAE’s oil minister Suhail Al Mazrouei.

The significance of this is profound. OPEC has been around for a long time, cutting output when the market gets oversupplied and ramping up when prices spike. Market management by OPEC has been proven to reduce price volatility, although it often translates into higher prices. The period between 2014 and 2016, when OPEC eschewed intervention and let the market sort things out on its own, was characterized by wild price swings, volatility and uncertainty.

A return to oil production management in January 2017 brought back stability to a large degree, while also raising prices. A permanent arrangement would extend this level of stability.

Of course, US shale production complicates their plans, but also makes the commitment by OPEC and Russia to cooperate beyond the current agreement all the more crucial if OPEC is to avoid another price collapse.

Still, the interaction between US shale and OPEC will continue to be the dominant narrative in the oil market this year, and the opposing forces could end up trapping oil prices within a relatively narrow price band of $60 to $75 per barrel for Brent.

If prices creep up towards the upper end of that range, US shale could accelerate, adding new supply onto the market and pulling oil prices back down. There is little room below $60 per barrel, however, as the OPEC cuts continue to keep supply off the market. Moreover, oil demand remains strong, and will continue to soak up a good chunk of the additional barrels coming onto the market. Taken together, prices will likely trade at a $60 and $75 range in 2018. 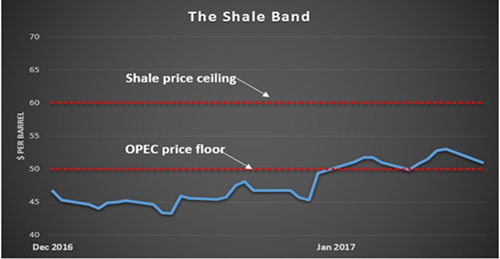 According to that theory, prices seemed to trade between $50 and $60 in 2017 with shale oil drillers capping oil prices at $60 and OPEC/non-OPEC production cuts putting a $50 floor under oil prices.

That dynamic is more or less alive and well, except that OPEC has decided to raise the price floor from $50 to $60 by taking 1.8 mbd off the market, a deal that has been in place for over a year. Now, the floor for Brent is more solidly at the $60 price level, rather than $50.

Of course, this is just a projection and is subject to uncertainty on many levels, some of which could force oil prices to shoot above or below the $60-$75 range. On the downside, a messy exit from the agreement could lead to higher-than-expected output and lower prices. Alternatively, a loss of 500,000 barrels a day (b/d) from Venezuela’s production would add something like $3 per barrel to the oil price. That is why institutionalizing cooperation between OPEC and Russia beyond 2018 is pivotal.

But, all of those factors, individually, are mere speculation. Taken all together, US shale and OPEC could trap crude between $60 and $75 this year.

Still, what will be driving oil prices in 2018 is a healthy global demand for oil getting healthier by the day. The first law of oil economics is supply and demand. All other factors are extras. The second law is that oil is like a coin: one side is economics and the other is geopolitics and the two sides are inseparable.

When there was a glut in the global oil market during the period 2014-2017, the oil price trended downwards ignoring all the geopolitical developments such as the war against ISIS in Iraq, the war in Syria, escalating tension between Saudi Arabia and Iran, rising tension between Iraqi Kurdistan and Iraq and the war of words between the United States and North Korea.

Now that the market is virtually rebalanced, any small geopolitical event could push price upwards.