Some experts are projecting a peak oil demand by 2036. Others like Fitch Ratings are saying that greater product awareness and technological changes could fast track the adoption of electric vehicles (EVs) that could plausibly lead to a peak oil demand before 2030.

It is, however, debatable as to whether a peak oil demand could be reached during the 21st century. The one certain thing is that oil is expected to remain the world’s primary energy source throughout the 21st century and probably far beyond. A major underpinning factor is the growing world population.

Global oil demand is projected to hit 100 million barrels a day (mbd) next year rising to 120 mbd by 2040 and accounting for 33% of global primary energy consumption in 2040 as it did in 2017 despite rising global oil production and consumption.

Are We on the Verge of a Post-Oil Era?

There could never be a post-oil era throughout the 21st century and far beyond because it is very doubtful that an alternative as versatile and practicable as oil, particularly in transport, could totally replace oil in the next 100 years. What will change is some aspects of the multi-uses of oil in transport, electricity generation and water desalination which will eventually be mostly powered by solar energy. However, oil will continue to be used extensively in the global petrochemical industry and other industries and outlets from pharmaceuticals to plastics, aviation and computers to agriculture and also in transport in most of the developing countries. Oil will continue to reign supreme throughout the 21st century and far beyond.

Transport and electricity generation are the two biggest sectors in the global primary energy consumption accounting for 30% and 40% respectively. Global transport accounted for 73% of the global demand for oil in 2017.

And while renewable energy sources have made great strides in the last thirty years, it only accounted for 3.6% of the global primary energy consumption in 2017.

There is no doubt that global energy’s future is ultimately in renewables. Solar power along with other alternative energy sources will ultimately provide all the electricity we need, will power water desalination plants and will drive our transport.

Still, oil demand growth could be projected to decelerate a bit on the back of efficiency improvements driven by technological developments, a tightening of energy policies and a relatively low (albeit increasing) penetration of EVs.

Solar Highways to the Rescue

China has recently come up with a very innovative way to enhance global electricity generation and reduce demand for oil: solar highways. The solar highways are the next gambit because they take the ‘farm’ out of solar and free up the land for agricultural use.

China is fast-tracking the country’s first solar highway in Jinan, the capital city of the eastern Shandong Province.

The plastic-covered solar panels cover a portion of highway that is two-thirds of a mile long and is designed to absorb the pressure of some 45,000 cars and trucks that traverse it daily. And this patch of highway is close to an electricity substation, so it can be hooked up to the grid easily. It also runs through and around cities, so nothing is lost along the way. It’s all captured for power.

In the United States, the prospect of a solar highway is decidedly more complicated. With the exception of a smattering of bridges and specific sections of some interstate highways, American roads just won’t cut it: They’re asphalt heavy and they give just enough for solar panels to snap, according to one transportation engineering professor from the University of Texas, cited by the New York Times (NYT). But Chinese roads generally have a heavy concrete foundation.

But it may be prohibitively expensive in either venue. It’s definitely more expensive than asphalt.

In China’s case, the Chinese authorities are hoping they can bring the cost down to around $300 per square metre from the now-exorbitant $460 per square metre for a solar road. They argue that they would have to be replaced less frequently than asphalt currently requires.

They also argue that it could eventually pay for itself by producing around $15 of electricity per square metre of solar panel—per year. That doesn’t sound like much, but a Chinese professor told NYT that it would mean that within 15 years it would pay for itself.

The thing about China’s solar highway is that costs will come down once adoption becomes widespread, and the Chinese are the masters of forced strategic adoption. In China, renewable energy gets invested and implemented before it makes any sense. In the United States, the reverse is true.

More than a decade ago, China overtook the US as the world's biggest carbon dioxide emitter. Today, it’s going for a complete 360 with a hungry drive to beat the United States at the renewable energy game. After all, this is largely a technology game, and China hopes to be the global technology leader, according to its strategic state plan by 2030.

China is now the largest investor in solar energy. In fact, according to the NYT, the country is putting up new power generation projects so fast that substations that would connect them to the grid aren’t keeping pace.

As we read about yet another way in which China is one-upping the United States on the technological battlefield, the technological war is not likely to be won through solar highways—one of the most complicated feats in renewable energy due to the cost of installation, questions about efficiency and repairs.

And it definitively outpaced US investment by three times. In the US, investment in renewables even fell 6% in 2017, dropping to $40.5 billion.

The game is on, and the winner will be the one willing to spend loads of cash on projects, even when it’s not immediately economically viable.

Is the Solar Industry Really in Trouble?

Goldman Sachs is projecting that the global solar panel market will shrink this year by 24%. It’s not the only negative forecast either, which is understandable given the latest major developments in the sector.

Before Goldman Sachs slapped the solar industry with its forecast of 24% fewer installations this year, BNEF and Credit Suisse warned of a 3% and 17% decline respectively in the solar market after China suspended approvals for new installations due to the weight of payments it already needs to make for current solar farms and, of course, after the Trump administration slapped a 25% import tariff on Chinese-made PV panels.

Whilst BNEF warned of a PV panel glut on a global scale, it also forecast that the glut will lower prices and stimulate demand, which will eventually reverse the gloom, allowing the market to recover as soon as next year. Also, these glut-caused lower prices will mitigate the impact of the Trump tariffs on the US solar industry, although they won’t be able to offset them completely.

There are also new solar markets opening up: Saudi Arabia is one very ambitious new addition to the industry. The Saudi solar market is projected to expand at a compound annual rate of 30% between 2018 and 2024. The UAE is also very ambitious in the solar power department, planning to source a quarter of its energy from solar installations by 2030. Africa as a whole is another market that will likely become an emerging force in solar power.

Whilst the world is still heavily dependent upon Saudi Arabia contributing more than 10% to global oil demand, it has been calculated that all of the world’s energy needs could be met with solar panels on just 1.2% of the Sahara Desert.  A map depicting global solar power resources shows the reason. There is no greater solar resource on the planet than a broad swath extending from the Sahara Desert of North Africa and into northwestern Saudi Arabia (see Map 1). 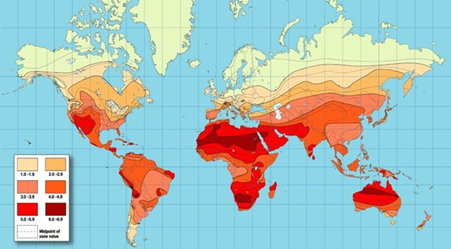 Despite its endowment, Saudi Arabia is planning for the future according to its Vision 2030 launched in 2016 by Saudi Crown Prince Mohammed bin Salman the de facto ruler of Saudi Arabia to diversify the Saudi economy and reduce Saudi dependence on the oil revenue. The Kingdom recently announced that it would invest up to $7 billion this year to develop seven solar plants and a wind farm.

Now Saudi Arabia plans to have the world’s largest solar plant. Prince Mohammed bin Salman signed a memorandum of understanding for the massive project in April this year with Japanese multinational conglomerate SoftBank.

The scale is unprecedented. The $200-billion project would produce 200 gigawatts of solar photovoltaic power and would take more than a decade to complete.

The Saudi solar project is symbolic in that it denotes a country making a strong commitment to a different kind of energy future. It also denotes that Saudi Arabia aims to remain one of the world’s vital energy producers.

The project is an integral part of Saudi Arabia’s plans to eventually replace oil and natural gas currently used for electricity generation and water desalination with solar and nuclear energy. This makes economic sense since Saudi Arabia in 2017 consumed 39% or 3.9 mbd of the crude oil it produced principally for electricity generation (1.3 mbd), water desalination (1.7 mbd) and transport (0.9 mbd). If this trend continues, Saudi Arabia will have no oil to export by 2030.

If such a project enables Saudi Arabia to reduce the oil it currently consumes for electricity generation and water desalination by 50% or 1.5 mbd, then at current prices it will be able to save some $41 bn annually.  This means that the project could in theory finance itself in five years.

The fact is that the solar industry won’t stop growing, despite tariffs and the suspension of new projects in China, the world’s biggest solar market. These developments could slow down its growth for a while, but with more and more players entering the solar field any negative effects would be temporary.