With oil prices alternating so frequently between bullish and bearish conditions, a global oil deficit could be making its way stealthily through the global oil market. 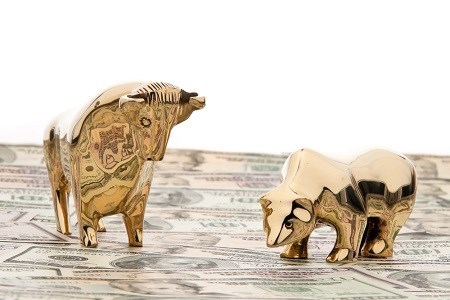 Last November, the International Energy Agency (IEA) warned that a shortage could set in as soon as 2020, as the investment shrinkage brought on by the 2014 oil price crash bears fruit. Prices, the IEA had said at the time, could jump significantly at the end of the decade. The IEA reiterated its concerns more recently in its World Energy Investment 2017 Report adding that the rate of new oil discoveries is at its lowest level in more than 70 years. Overall, global spending on oil and gas will rise by a moderate 3% this year, compared to the 44% between 2014 and 2016.

According to Mr. Amin Nasser, the CEO of the oil giant Saudi Aramco, there is simply not enough investment in new production to replace depleted fields. Shale oil production growth will not be enough to offset a deficit projected to come in at 20 million barrels a day (mbd) over the next five years. Saudi Aramco’s boss also said that about $1 trillion in investments were cancelled during the oil price crash.

These projections paint a rather gloomy picture for bears, while offering a ray of hope for the more patient bulls. But they don’t provide solace to Saudi financial problems. Saudi Arabia needs higher oil prices right now.

When crude oil prices started to decline steeply in July 2014, Saudi Arabia responded by flooding the global oil market with oil in defence of its market share, trying to damage Iran’s economy and slowing down if not killing US shale oil production. But this strategy failed miserably and inflicted huge damage on the Saudi economy and the economies of all oil-producing countries of the world. However, under the stewardship of the new Saudi oil minister, Khalid Al Falih, Saudi Arabia abandoned its discredited oil strategy and spearheaded the agreement between OPEC and non-OPEC oil producers to cut production by 1.8 mbd in support of the oil price. But since the implementation of the production cuts in January 2017, the price has hovered for a while within a range of $51-$57 a barrel occasionally declining to $45 a barrel.

Now Saudi Arabia is in a dilemma over the oil price. It could not go back to its failed oil strategy of flooding the global oil market. Nor could it manage to persuade other OPEC and non-OPEC oil producers to agree further deeper cuts because they will refuse. Furthermore, Saudi Arabia does not want to end up carrying the burden of further cuts on its own as it loses both income and market share.

And to add to its woes, Russia is now saying that the Russian economy is actually ready to live forever with an oil price of $40 or less.  This raises the question as to how long will Russia continue to abide by the production cuts’ agreement signed with OPEC.

And without higher oil prices, the Kingdom faces an imminent financial crisis. If Saudi Arabia’s economic reforms which include the Initial Public Offering (IPO) of Saudi Aramco, Vision 2030 and OPEC production cuts, all fail, which is likely, then Saudi Arabia will have to consider other alternatives to push the oil price up and also to distract from the deteriorating economic situation in the country and the potential power struggle within the Saudi royal family after King Salman departs the scene.

Circumstantial evidence suggests that hawks in Saudi Arabia could be deliberately escalating tension with Iran and even considering embarking on some external military adventures in order to push the oil price up. The threatening noises coming from Saudi Arabia against Iran point that way.

The latest round of war of words, sparked by Saudi Crown Prince and Defence Minister Mohammed bin Salman, the de facto head of government, points to worsening hostility between the two countries – a situation fraught with the dangers of war.

Crown Prince Mohammed bin Salman in a widely circulated interview on May 3, threatened Iran with war declaring: “We won’t wait for the battle to be in Saudi Arabia. We’ll work so that the battle is for them in Iran”. The bellicose words from the prince predictably provoked a harsher response from Iran. Iranian Defence Minister Hossein Dehqan, in an interview with Lebanon’s Arabic language Al-Manar TV, hit back at Riyadh and warned: “If the Saudis do anything ignorant, we will leave no area in Saudi Arabia untouched except Mecca and Medina”.

Though neither Saudi Arabia nor Iran envisage an open conventional war between them, there is always the potential for frontier skirmishes on their shared littoral borders with shared gas fields and disputed islands being obvious touchpoints.

Still, Saudi Arabia might be tempted to embark on external military adventures in an attempt to force the oil price up. One such adventure is to try to disrupt the Bab el-Mandeb Strait at the southern tip of Yemen considered one of the seven major energy choke points in the world and through which some 4 mbd pass each day, along with 3-6 billion cubic feet of natural gas (see Map 1). 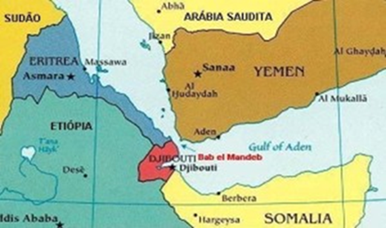 If the strait is disrupted, oil and gas prices will spike and the Saudi economy will profit significantly, especially since the Saudis last year quietly started expanding their East-West oil pipeline. With the strait cut off, the only practical method for the Gulf states (with the exception of the UAE) to export oil to the West will be across Saudi Arabia through its newly expanded East-West pipeline or taking a far more expensive and circuitous route around Africa (see Map 2). 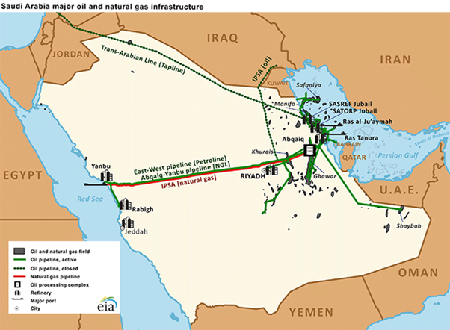 Beyond Yemen, Saudi Arabia could target southern and eastern portions of Iraq (parts of Al Anbar and Al Muthana) in an attempt to disrupt the Iraq Strategic Pipeline that would hamper Iraqi oil exports and raise the value of Saudi oil at relatively low cost to them (see Maps 3 & 4). 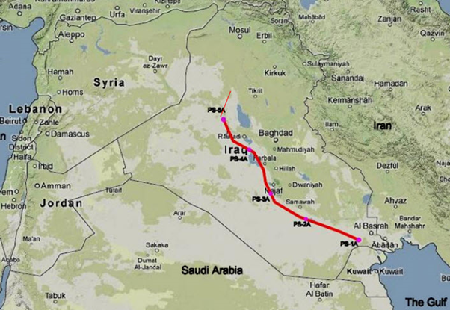 Currently only the 680-km Basra-haditha sector of the Iraq strategic oil pipeline with a capacity of 2.25 mbd is operational. Plans to extend it to the Jordanian port of Aqaba on the Red Sea are underway. When finished the Iraqi strategic pipeline will have a capacity of 3.25 mbd and will provide Iraq with a new export route to bypass both the Strait of Hormuz and the Bab el-Mandeb Strait. 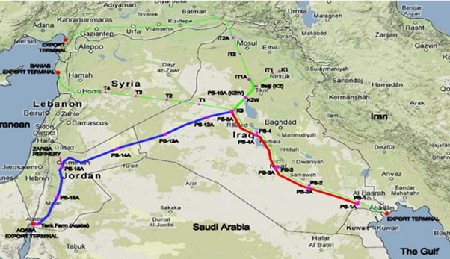 However, Saudi Arabia is well advised to build bridges of trust and understanding with Iran. It is far more economical and beneficial and strategically desirable to talk to Iran rather than invite a potentially devastating war to the Gulf region or destabilizing the region by military adventures. By taking to each other, Saudi Arabia and Iran could devise a way to push the oil prices up to their mutual benefit and also the benefit of oil producers in the Gulf.