Oil Prices Will Be Mostly Bullish in 2017

Despite a 91% compliance by OPEC members with the production cuts implemented in January 2017 and the removal of more than 1 million barrels a day (mbd) from the global oil market, the oil price has seen a lot of volatility ranging between $53 and $57 a barrel.

And although US oil inventories have declined for the last five months consecutively according to the International Energy Agency (IEA), their levels are still close to record high. This could be due to two factors: one is rising Shale oil production and second, the glut in the global oil market might have been bigger than what was previously estimated.

If oil prices continue to rise, US shale oil producers will ramp up output, in effect capping the oil price. This may not happen as swiftly as some think. After all, there are suspicions that to coax Wall Street investment, shale producers have exaggerated their ability to produce low-cost oil.

A recent Columbia University report estimates that US shale oil could see an increase in output of 300,000 to 900,000 barrels a day (b/d) in the next few years from the current US production of 8.77 mbd to 9-10 mbd if oil prices rise above $60/barrel. This raises the prospects of a new trading zone for crude oil within a narrow band of OPEC’s price floor of $50/barrel and US shale price ceiling of $60/barrel (see Chart 1).

However, the shale band is not an ironclad theory by any means, nor is it permanent. There are plenty of factors that could trash the credibility of this theory, namely, poor OPEC compliance, weak oil demand, higher-than-expected shale production, and stubbornly high crude oil inventories, which could all work together to push prices lower.

Likewise high OPEC compliance, strong demand, a faster drawdown in stockpiles and disappointing figures from US shale could spark a rally above $60 per barrel. Time will tell.

Oil prices have seen a lot of volatility following reports that OPEC could extend its production cuts and might even apply deeper cuts if global crude oil inventories fail to drop to a targeted level.

But OPEC and non-OPEC producers have said from the start that they will review cuts six months after their implementation to assess what impact the production cuts have had on oil prices and the oil glut.

If by next June they found there is a balance between global supply and demand, they may decide to extend the production cuts for six more months to enable them to absorb the glut in the market completely and to give the oil price more time to consolidate its recent gains. If, however, the judgment in six months-time was that global demand is moving ahead of supply, then they may decide not to renew the agreement.

And despite the hesitant rise of the oil price since the implementation of the OPEC cuts in the first of January 2017, there are at least five short-term and long-term pointers indicating that the oil price will break through the $60 level during the first half of this year and could be projected to reach $70 a barrel before the end of this year.

The first pointer is that global oil demand is projected to increase this year by 1.5% or 1.4 mbd according to IEA.

The second is that the International Monetary Fund (IMF) is expecting the global economy to grow this year by 3.5% from 3.2% in 2016.

The fourth is that the US Commodity Futures Trading Commission (CFTC) announced on Friday that new data showed that confidence in the recovery of the oil price was booming and that the global oil market is on the road to rebalancing. Immediately after, Reuters reported that money managers raised their long positions on oil to the highest on record. The OPEC and non-OPEC cuts in production has boosted investor confidence. Many are optimistic that the price will rebalance this year.

And the fifth pointer is that the world gross domestic product (GDP) is projected to double in the next 15 years from $76 trillion in 2015 to almost $150 trillion, accelerating demand for energy. Non-OECD nations, particularly China and India, will experience the most economic growth, driven by urbanization.

And to add long-term support for the oil price, Exxon Mobil’s recently released 2017 “Outlook for Energy: A View to 2040” is projecting that the global energy mix will not look much different for oil in 2040.  Accordingly, oil is expected to remain the world’s primary energy source, driven by demand for transport which is projected to grow by 20% between 2015 and 2040 (see Chart 2 & 3).
Chart 2 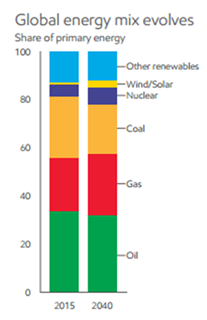 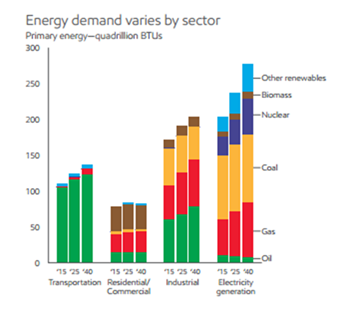 And while the oil price might dip every now and then, its trend is upward and mostly bullish in 2017.

*Dr Mamdouh G. Salameh is an international oil economist. He is one of the world’s leading experts on Middle East oil. He is also a visiting professor of energy economics at the ESCP Business School in London.