Iraqi Kurdistan’s Independence: At What Price?

Independence has been a lifelong dream for many Iraqi Kurds and so the 25th of September 2017 referendum was met with understandable jubilation across Iraqi Kurdistan with over 90% voting for secession from Iraq.

Although the referendum was non-binding, it pointed to a deteriorating geopolitical situation between the Kurdistan Regional Government (KRG) and neighbouring countries. Baghdad urged neighbouring countries to shut down flights into the region and threatened a blockade. Iran stopped oil trade with Iraqi Kurdistan and also banned flights to the region. And Turkey, which fears stirring separatism among its own Kurdish population, has threatened similar action. Turkish President Recep Tayyip Erdogan called the vote “treachery” and suggested the region would "not find food or clothing" if sanctions were implemented. 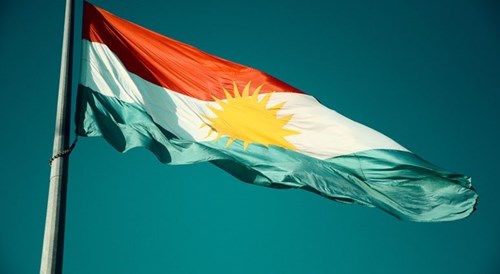 The Economic Case against an Independent Kurdistan

With a near-complete dependency on imports for basic goods and on oil piped through Turkey for government revenues, it is reasonable to ask as how viable an independent Kurdistan’s economy would be.

The economic case against secession rests largely on oil. Since gaining de facto autonomy in the early 1990s under a US-imposed no-fly zone, Iraqi Kurds have failed to diversify their local economy and have been dependent on oil exports for up to 90% of their revenues.

Because the KRG’s roughly 500,000 barrels per day (b/d) of oil exports are piped almost exclusively through Turkey to the port of Ceyhan on Turkey’s Mediterranean coast, Ankara has enormous leverage on Kurdistan’s economy (see Map 1). It can easily choke Kurdistan’s economy.

By calling for the vote over objections from Baghdad, Ankara and Tehran, Masoud Barzani, president of the KRG and his ruling Kurdistan Democratic (KDP) appeared to be betting the region’s neighbours would be unwilling or unable to muster sustained sanctions or a blockade. Supporters point out that adjacent countries, particularly Turkey, have profited heavily from trade with the region and would lose a great deal from such a move.

While Turkey would lose some trade from a blockade of Iraqi Kurdistan, it would not hesitate to take action against Iraqi Kurdistan if it served its overall interests, particularly discouraging separatist movements among its own Kurdish population. Indeed, President Erdogan seemed to raise exactly that prospect when he said “We have the tap. The moment we close the tap, it’s done”. 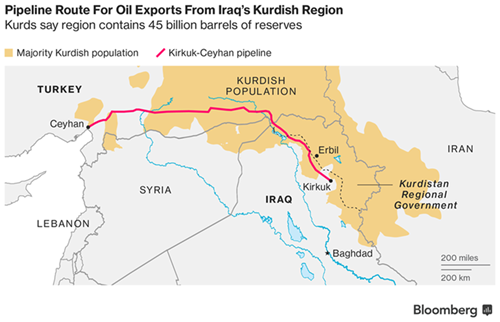 Still, for independence to be viable, the KRG would need at least tacit support from Turkey and the United States.

Turkey continues to view a future independent Kurdistan negatively although Ankara’s pragmatic relationship with the KRG leaves room for manoeuver. In contrast, Iran will be much more vociferous in its opposition because of its impact on Iraq, a close ally of Iran.

There is still, however, significant space between the status quo and full independence of Iraqi Kurdistan, leaving ample scope for the KRG to gain greater autonomy and power within Iraq’s constitutional framework. Nowhere is this more apparent than in the oil and gas sector. Oil from Kurdish and KRG-controlled Kirkuk currently accounts for around 500,000 b/d or 10% of Iraq’s production of 5 million barrels a day (mbd).

The KRG says northern Iraq’s Kurdish enclave could hold an estimated 45 billion barrels (bb) of oil reserves. If proven, the region will have the world’s 11th biggest reserves. The region pumped 544,000 b/d in 2016 and is expected to boost production to 600,000 b/d this year.

To get its oil to market, the land-locked Kurdish region relies on a pipeline to the Turkish port of Ceyhan. The region’s exports averaged 515,000 b/d last year.

Kurdish forces took control of the oil-rich Kirkuk area in June 2014 after the Iraqi army abandoned it in the face of advancing Islamic State militants but Baghdad refuses to recognize Kurdish control of the area.

The Kirkuk fields under Kurdish control are pumping 350,000 to 400,000 b/d according to Iraqi oil ministry sources.

The Geopolitics of Kurdish Independence

What is driving the geopolitical responses to Kurdish Independence? Three points highlight the stakes.

First, an independent Kurdistan on their respective borders threatens to destabilize Kurdish populations in Iran, Turkey and Syria. All three countries fear the domino effect that independence for Iraqi Kurds could trigger.

Second, the United States does not want or need at this point another fight on its hands in the Middle East as it tries to confront a rising Iran and also fight the ISIS.

Third, an independent Iraqi Kurdistan could destabilize Iraq itself for years to come. Over 90% of young Iraqis view the United States as their enemy and many Iraqis believe life was better under the rule of Saddam Hussein. Fragmenting the Iraqi state would only further highlight the catastrophic strategic mistake the United States made with its 2003 invasion of Iraq and the never-ending consequences of its action.

And while Kurdish grievances are understandable, a Kurdish unilateral declaration of independence could exacerbate rather than remedy these grievances.

Iran, Turkey and Syria oppose redrawing the map of the Middle East – in Iraqi Kurdistan or elsewhere – as this could threaten the stability of all shareholders – except one. It is not a coincidence that Israel is pushing for Kurdish independence despite its vehement objection to a truly Palestinian self-determination.

Supporting Kurdish independence entails no cost and no political implications for Israel because Washington is either unwilling or unable to hold Tel Aviv accountable for its intransigence. Moreover, Israel regards the Kurds as a buffer against Iran and Arab nations. An additional objective is that it also divides a once powerful foe in Iraq – a country that Israel believes is in part controlled by its number one obsession: Iran. Weakening Baghdad and Tehran in one swoop would be a great strategic achievement for Israel.

Western governments oppose a secession of Iraqi Kurdistan from Iraq, arguing it will undermine the fight against ISIS and escalate tensions with Baghdad. While the United States has expressed its opposition to the referendum and its commitment to a unified Iraq, it might still follow in Israel steps in the future and recognize an independent Kurdistan. A pointer to that is that long before the referendum the United States has allowed two major American oil companies, ExxonMobil and Chevron, to operate in Iraqi Kurdistan against the wishes and objections of the Iraqi central government.

Moreover, the US might be keen to establish military bases in the breakaway region close to Iran. Israel, the United States and Iran under the Shah had a long history of supporting and arming Iraqi Kurds against the regime of Saddam Hussein.

Kurdistan’s independence poses a real dilemma for Russia. It would likely hurt Russia’s interests in the region. It would not only jeopardize Russia’s relations with Baghdad but would also put Russia at odds with Turkey and Iran, two powers Moscow is presently aligned with in the Middle East.

Since Kirkuk came under Kurdish control in 2014, Russian energy giants have shown great interest in developing oil and gas fields in Iraqi Kurdistan. But with Kurdish-controlled areas in Iraq being landlocked, oil exports are entirely dependent on transportation to seaports through Iraq’s mainland or Turkey. As both Russia’s Gazprom and Roseneft are investing in developing Kurdistan’s oilfields and gasfields and also reselling Kurdish oil, they need the transportation link to remain open. If Turkey follows through its threat to shut the Kirkuk-Ceyhan pipeline in the event that Kurdistan declares independence, Russia’s investments in the region could go bust.

One should not also forget that the idea of independence for ethnic minorities still hits home in Russia, as the memories of Chechnya’s strife for independence are still fresh.

There is a risk that a potentially dangerous conflict could erupt between Iraqi Kurdistan and an emboldened and confident Iraq demanding the return of Kirkuk to the authority of the central government in Baghdad and refusing bluntly any calls for Kurdish independence. Such a conflict could involve Iran, Turkey, Israel, Saudi Arabia and, by proxy, the United States and Russia.

Iran, Iraq and Syria know first-hand the adverse impact of sanctions having experienced them in one form or another. This alone should push them to work with the United States and Turkey to adopt a collective, calibrated approach that sends a clear message to Iraqi Kurds and their leadership that taking unilateral steps to divide Iraq and create facts on the ground could undo the progress they have achieved over the past 25 years.

However, they should also simultaneously provide the Kurds with the means to have a volte-face on the independence issue by following the dictates of the Iraqi constitution and referring to the Iraqi Supreme court when they have disputes with the federal government.

In the final analysis, Turkey is the single most important player that could break or make Iraqi Kurdistan’s quest for independence. What price would then Turkey extract from the KRG for allowing oil exports through its territory; nothing less than a settlement of the Kurdish question in Turkey.

Alternatively, Turkey, looking at the overall geopolitical picture, may decide to smother the Iraqi Kurds’ quest for independence in return for sharing some of Iraq’s vast oil wealth. The Turks have always coveted the region's oil wealth.