With the majority of its nuclear-related economic sanctions lifted, Iran is to all appearances open for trading with the world. However, the reality is different. 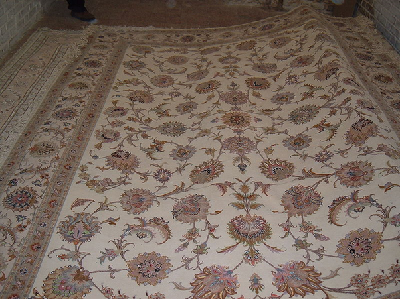 Iran’s economy with an estimated gross domestic product (GDP) of $417 bn is the third biggest in the Middle East after Saudi Arabia and the UAE. Oil accounted for 60% of Iran’s budget revenues in 2015.

But despite Iran’s efforts at diversification, its GDP is till dependent on the oil export revenues to the tune of 60%. Moreover, Iran needs a price at around $130/barrel to balance its budget (see Figure 1). 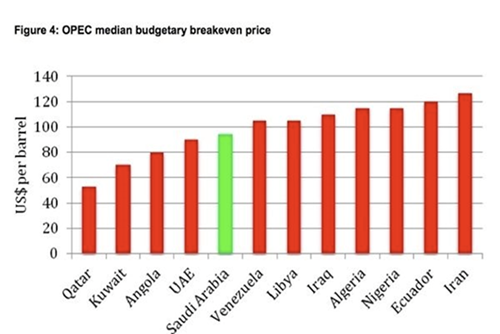 Iran’s oil industry – hampered by years of mismanagement, war and sanctions – is a mess; the country hasn’t been able to make its OPEC quota of 4.00 million barrels a day (mbd) since 2000. Plans to raise output are well behind schedule; and long-term plans for expanding production capacity may have to be scaled back as well because of insufficient reserves. Against this background, it is perhaps not so surprising that one of OPEC’s leading members should want to develop nuclear energy.

Oil is at the heart of Iran’s nuclear programme. Iran needs nuclear energy to replace the crude oil and natural gas currently being used to generate electricity, thus allowing more oil and gas to be exported. Without nuclear power, Iran could be relegated to the ranks of small exporters as early as 2020 with catastrophic implications for its economy and also the price of oil.

The final Iran nuclear deal is a great triumph for Iran. Under the terms of the deal, Iran will limit its nuclear activities particularly in relation to enriching uranium and in return it will receive $50 bn of its frozen financial assets in the West and there will be a lifting of almost all economic sanctions against it within a few months. In real terms, the deal will only delay by a few years the day when Iran acquires nuclear weapons.

In the furore about Iran’s nuclear programme, one important fact is being overlooked – Iran’s oil resources may not be sufficient to supply its rapidly growing population without major cuts in oil exports. Iran’s proven oil reserves have been greatly overstated to the extent that it may actually need nuclear power to fuel its economy and also to remain an oil exporter in coming years.

The US government has argued strongly that a country so apparently well-endowed with oil and natural gas as Iran cannot have any legitimate need to develop nuclear energy.

However, when the Shah started Iran’s nuclear energy programme in 1974, nuclear power could not be justified economically as Iran’s population was less than half its present 78 million, oil production was 6 mbd, almost double the present production of 3.1 mbd and energy consumption was less than a quarter of consumption today, and unlike now, Iran’s oil reservoirs were not in decline. The question is: since the United States strongly encouraged the Shah to build nuclear power plants in 1974, why is it objecting now to Iran pursuing a nuclear programme? The answer is that in 1974 the Shah of Iran was a great friend of Israel while it is now seen as an enemy of Israel.

A major stumbling block in Iran’s attempts to raise capacity is the reservoir management practices that were used to achieve the record levels of the 1970s. During the 1970s, the re-injection of gas into oil reservoirs was greatly increased. In less than 10 years, crude oil production rose from under 2 mbd to 6 mbd.  This proved too much for some large reservoirs and output began to fall sharply. By 1978, it was down to 5.2 mbd. The same year, a series of strikes by workers in the upstream sector led to a period of turmoil during which reservoir management suffered considerably.

The excesses of the 1970s and the neglect of the 1980s and 1990s have left Iran with pressure problems and water encroachment in several of its oilfields. Billions of barrels of reserves have probably been lost as a result despite attempts to step up rates of gas injection in recent years.

However, starting with a reserve base of 59 bb in 1985 (as reported by OPEC’s Annual Statistical Bulletin 1989) and taking into account Iran’s production of 35 bb during the period 1985-2015 and allowing for the addition of 5 bb of recoverable reserves from the Azadegan oilfield, I calculated Iran’s actual proven reserves at around 30 bb.

Iran will find it hard to increase its oil production capacity over the next decade or so whatever the size of its reserves. It has not always managed to attract the foreign investment it needs to raise its capacity substantially, and where foreign companies have been tempted in, there have sometimes been delays in bringing important projects into production.

US companies are excluded from Iran under the terms of the Iran Libya Sanctions Act of 1996 (ILSA). Many other companies have found Iran’s upstream terms unattractive or the levels of political risk too high.

Iran currently has a few upstream projects involving the development of seven oilfields.

Even if all Iran’s upstream projects go as planned, Iran could only add an estimated 700,000 b/d to its production after 2021/22. However, Iran’s upstream oil development has always had a tendency of lagging far behind their planned dates. That is why Iran could only add 300,000 b/d to its production during 2016/17 (see Table 3).

Nuclear Power to the Rescue?

Given the problems in its oilfields, Iran may struggle to maintain production at current levels. In these circumstances, nuclear energy may have an important role in restricting the consumption of hydrocarbons in Iran and allowing more oil and gas to be exported.

The demand for electricity has been growing at an annual rate of 6.5% per annum.  If this trend continues and crude oil is not replaced by another source of energy, Iran would hardly have any significant amount of oil to export within the next two decades.

By 2021, 10% of Iran’s electricity is supposed to be supplied by nuclear power, 20% by hydro-power, 5% by renewable sources and the remaining 65% by natural gas, thus eliminating the country’s reliance on oil.

Impact of Lifting the Iran Sanctions on Oil Prices

With the conclusion of the final Iran nuclear deal, most of the economic sanctions against Iran have been lifted. This means that Iran could in the fullness of time be able to import advanced American oil technology such as enhanced oil recovery (EOR) and attract foreign investment to repair its damaged oil industry and virtually depleted oil reservoirs.

However, it will take Iran more than 3-5 years to deploy new technologies and repair the damage in its reservoirs and it will need more than $200 bn of investments in its ailing oil and gas industry according to the International Energy Agency (IEA).

Moreover, given current market conditions, only limited international investment will likely be available to help increase Iran’s production. At today's oil prices, investors are cutting back everywhere. Global investments have already been cut by $200 bn, or 40%, since the collapse of oil prices in July 2014. Investors are concerned about investing money due to the simmering geopolitical tensions, especially in the Middle East and the Ukraine.

Such realities cast major doubts on Iranian oil minister Bijan Zanganeh's recent claim that if sanctions were to end, "Iran will be able to raise its production to 4.8 mbd by June 2017. Iran has only managed to produce an average of 3.15 mbd this year and export 1.0 mbd.

The decline in Iran’s oil exports over the last few years was not solely due to tighter sanctions but mainly to fast-depleting old oilfields whose reservoirs were damaged in the 1970s when Iran was producing 6 mbd under the Shah. Since then Iran has never had the chance to repair its damaged oil industry what with war with Iraq from 1980-1988 followed by stringent sanctions because of its nuclear programme.

Iran’s Quest for Renewable Energy (RE) And to publicize its keen interest in tapping into RE resources, the Renewable Energy Organization of Iran (SUNA) modelled its new feed-in tariff policy on the German equivalent, guaranteed government purchases of power for 20 years and introduced a 15% tax reduction for companies that use renewable energy. Iranian government sources project that renewables will account for 10% of Iran’s electricity needs within five years. Iran’s 6th Development Plan includes a stipulation that RE capacity should grow by 5,000 MW by 2018.

Until recently, sanctions would have made achieving such an ambitious goal very difficult, if not impossible. However, due to lifting of major restrictions on both domestic and foreign financing, investment goals of $10 bn by 2018 and $60 bn by 2025 now appear feasible.

Iran’s energy mix is dominated by hydrocarbons. They account for 98% of Iran’s total energy demand. The remaining 2% comes from a combination of hydropower, nuclear, biofuels and other renewable sources.

Overreliance on fossil sources is a problem for Iran’s economy. Though the government has significantly reduced subsidies on energy products in recent years, subsidies should eventually be eliminated altogether. At around 32 US cents per litre, the price of gasoline is near that of a bottle of water in Iran, and at just US 4.5 cents per kwh of electricity, Iranians pay far below the global average.

Demand for electricity is growing at 6.5% per year. This rate is currently at least 3.5% faster than the country’s GDP growth; this figure underscores that Iran can’t reasonably sustain the use of hydrocarbons to generate electricity nationwide.

Once contributing 14% of Iran’s base energy supply, hydroelectric sources have been reduced to less than 5%, as river levels continue to fall as a result of widespread droughts. Government sources stated that nearly all of Iran’s 50 hydroelectric plants have either halted generation or have seen their capacity diminished.

With 100,000 MW of potential installed capacity, Iran’s wind power could rival that of major developed countries such as France and Britain. Unsurprisingly, the Iranian government has given wind power priority over other RE sources due to the country’s topography and existing manufacturing and production capabilities.

A 5,000 MW increase of RE capacity is anticipated by 2018. Roughly 4,500 MW of that capacity is expected to come from utility-scale wind farms throughout the country.

Iran’s first and foremost task is to repair the damaged reservoirs in its oilfields if it is to remain a major oil exporter. The second task is to continue diversifying the economy in order to reduce its dependence on the oil export revenues.

Iran has achieved significant successes in developing renewable energy. Iran should maintain this great momentum as it is beneficial to the country on economic and environmental grounds.

Lifting the sanctions against Iran will hardly affect the global oil prices or the global oil market in the long-term. Any initial impact could be the result of Iran releasing some of its stored crude oil to the market, but the impact will be short-lived and very limited. However, Iran might benefit from the development of its huge natural gas reserves.

*Dr Mamdouh G. Salameh is an international oil economist. He is also a visiting professor of energy economics at the ESCP Europe Business School in London.