IAEE President-Elect Prof. Kumbaroglu, Chairman of the Turkish Energy Policy Center at Boğaziçi University and DEPA Vice Chairman Prof. Andriosopoulos, Director of the Research Center for Energy Management at ESCP Europe Business School, have agreed at the Atlantic Council Energy and Economic Summit on the mutual benefit of regional cooperation to establish a Joint Gas Hub. 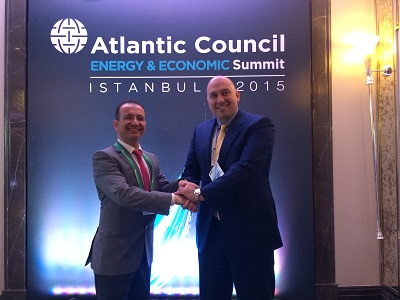 Establishing a natural gas hub at the Greek-Turkish border would benefit both countries and the EU by providing a reference point where gas prices are determined through competition from different sources of gas, IAEE President-Elect Kumbaroglu and DEPA’s Vice Chairman Andriosopoulos declared jointly.

Professor Kostas Andriosopoulos, Vice Chairman of Board of Directors at DEPA, Greece's Public Gas Corporation (the Greek equivalent of Turkey's state-owned pipeline corporation BOTAS), said: "I do see potentially new volumes of gas coming to Europe via Turkey. Turkey is a big transit country due to its location, and its proximity next to most of the biggest existing and potentially new gas suppliers,"

"A joint gas hub at the border is a possibility, because in addition to any new gas volumes transiting, there is already a bi-directional interconnector between Greece and Turkey that has enough spare capacity (7 bcm/ year; the pipeline runs between Karacabey in Turkey and Komotini in Greece), " said Prof. Andriosopoulos, who is also the Director of the Research Center for Energy Management at ESCP Europe Business School.

Russian-proposed Turkish Stream pipeline project plans to carry 32 billion cubic meters (bcm) every year to Turkey, while Turkey's Trans Anatolian Natural Gas Pipeline (TANAP) will begin its first deliveries of Azeri gas with an annual volume of 16 bcm in 2018. Although some of these volumes will serve Turkey's domestic consumption, a significant portion of them will reach Europe.

"The major demand is in Europe. From supply to demand, this gas needs to be transported to Europe, and in order to have competition, you need a gas hub," Professor Gurkan Kumbaroglu, president-elect of the International Association for Energy Economics said.

"There may be other sources of gas as well, coming from the Mediterranean, Iraq and Iran. So, Turkey is in a unique position to have these sources around itself," said Kumbaroglu, who is also chairing the Energy Policy Research Center at Turkey's Bogazici University.

The experts said that the Greek-Turkish border is in a natural position to have all these gas sources -- from Russia, Caspian, and in the future from Mediterranean and the Gulf regions -- to meet, and to have the gas price determined in a competitive way based on market fundamentals of supply and demand.

"The idea of gas-to-gas competition is to make gas tradeable in a competitive market. The ideal location for this hub is the Turkish-Greek border. Actually, the trading point at the border is a natural hub location. It would be a real, physical hub where the reference price would be based on real physical trading as opposed to existing virtual trading points," Kumbaroglu explained.

"The cooperation between Turkey and Greece to form a joint hub would be very beneficial to all parties involved and should find support from the EU as it will lead to more competition and greater supply security in the European market. It's not only Russian gas, but it's important to have other gas from various supply sources to facilitate this competition. This joint hub would bring economic benefits for both countries, and the EU, and would also facilitate cooperation in other areas as well," he added.

Moreover, Andriosopoulos stated that in case Turkish Stream eventually delivers Russian gas to the Turkish-Greek border, the planned interconnecting infrastructure within the EU borders can be used for the gas to reach the European markets.

"Gas volumes coming from the Greek and Turkish sides to the European market creates an ideal condition to have a hub at the border, so there can be a reference point for what the price of gas should be in the region," he said.

"This idea would also serve the Balkan's gas security through the south-to-north ”Vertical Corridor” where gas, coming from pipelines and the LNG markets, can also reach the Bulgarian, Serbian, Romanian, Hungarian, and even the Ukrainian gas markets," he added.

Andriosopoulos explained that DEPA and its partners have also been promoting the project of a floating LNG terminal in Northern Greece, which would be accepting gas volumes from the global markets, from existing suppliers such as Qatar and Algeria, and also from new suppliers like the U.S. or Australia, which would be feed into the joint proposed gas hub.

- How would Russia perceive the hub?

Russia, the biggest single gas supplier to Europe and Turkey, usually prefers long-term contracts to sell high volumes of gas, in order to get the best price as a seller. On the other hand, the joint hub would have Russian gas to compete on the border with other gas sources, and could have its price trimmed eventually on the spot market.

The experts emphasized that the global gas market has changed, and Russia would adapt to the new market environment.

"Russia has to adapt, and has been adapting in northern parts of Europe. That is the new reality of the global gas market, mostly due to the increase of the LNG volumes that will now make gas a “real” - tradable - commodity. Turkey is the biggest single buyer of Russian gas after Germany, and Greece is the gateway to Europe," Andriosopoulos said.

"We are two nations that are in the crossroads of two worlds -- Europe and Asia. If a project complies with EU regulations and its third energy package, then Europe will support it," he added.

Andriosopoulos also stressed that Turkey and Europe, as a single market, are both existing and traditional gas markets for Russia, which will continue to supply gas in those markets and play a pivotal role, as the infrastructure is already in place. However, all the aforementioned gas project developments, will help both Turkey and Europe, especially the South East part of the EU, to become less dependent on a single supplier, and thus diversify their supply sources and become more energy secure, which is the target of the European Energy Union.

Kumbaroglu said that it may be hard for Russia to have long-term bilateral contracts to sell its gas, and added "Natural gas trade is shifting more and more to the spot market globally."

"I believe we could also get help and financial support from the EU, because a joint hub would definitely be in the interest of Europe, supporting the European Commission’s strategy to achieve a more competitive, secure and sustainable energy system" he added.

"We decided to continue our local activities as a trilateral cooperation between the Turkish Association, Greek Association and Italian Association for Energy Economics. We will be intensifying this cooperation with annual conferences to be organized on a rotating basis, in Istanbul, Athens and Rome," he concluded.