HOME / VIEWS ON ENERGY NEWS / CAN THE EU ACHIEVE SECURITY OF SUPPLY WITH LNG?

Can the EU Achieve Security of Supply with LNG?

Within the European Union (EU), one of the key aspects of its energy strategy is to ensure the security of supply. This objective was introduced in the 2007 Lisbon Treaty, in its article 176A:

“The Union policy on energy shall aim, in a spirit of solidarity between Member States, to ... ensure security of energy supply in the Union” (1).

As a significant portion of the energy consumed in Europe is imported from Russia, it is crucial for the EU to reduce its dependency. The Lisbon Treaty vows to procure to the EU a roadmap to build a resilient energy network within its territory, as well as to diversify import channels.

Currently, the European energy mix consumption is composed of:

In 2016, 54% of the energy consumed in Europe was imported in the form of fossil fuel while the others 46% were produced domestically. Check Figure 1 for further information.

It is vital for the EU to diversify its suppliers of energy (2) as more than half of the energy needed in Europe is imported. Diversification of energy suppliers does not only bring security to the European energy market, it also allows a higher leverage to negotiate against suppliers to deliver energy at an affordable cost to its citizens (3).

Coincidently, diversification in European natural gas supply is made feasible thanks to the Shale Revolution in North America that has been occurring over the past decade. For example, in the Permian Basin, found beneath parts of Texas and New Mexico, levels of oil and gas output have surprised every oil market analysts’ forecast, including those within the U.S. Energy Information Administration (Figure 2). 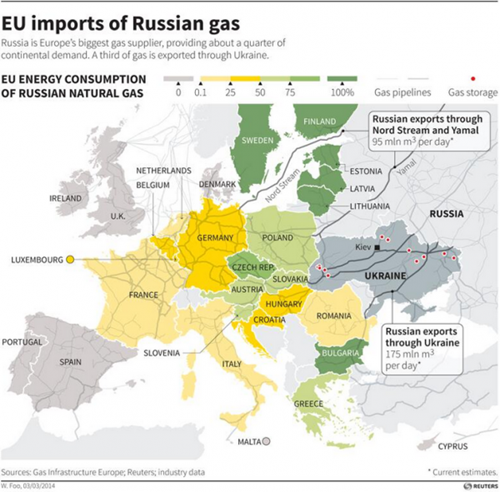 Today, the United States is the largest oil and gas producer worldwide, surpassing both Saudi Arabia and Russia. Due to the recent spike in American natural gas output, natural gas liquefication terminals are being built across the country to export gas to Europe and Asia. The first U.S. liquid natural gas (LNG) carrier arrived at the Port of Sines in Portugal in April 2016.

EU LNG imports from the U.S.

Since 2016, the EU LNG imports from the U.S. have reached 2.8bcm, with more than 40 U.S. LNG tankers delivered to Europe. Nearly absent from the European market 20 years ago, the strategic importance of LNG in the European gas mix is growing year after year. In 2017, 55bcm of LNG were imported to Europe, making up 14% of that year’s total extra-EU gas imports in 2017, a growth of 12% in the sector compared to the level of importation in 2016 (4). However, the largest portion of European LNG imports are still coming from Qatar, Algeria and Nigeria.

The current spare capacity across the different LNG regasification plants is close to 150bcm and the projects that are under construction should add 15bcm more of capacity by 2021. As a result, LNG imports from U.S. to Europe are expected to grow at an accelerated level, reaching 8bcm by 2022 (Figure 1).

Being the U.S. a new LNG supplier, the EU can improve the diversification of its supplies and build a more resilient market in the gas sector. It also shows the willingness of EU officials to welcome new economic partners in this particular sector, and  drive competition between the different suppliers. As result, other countries are encourgaed to follow this path.

“In July 2018, European Commission President Jean- Claude Juncker and U.S. President Donald Trump made a joint statement in Washington D.C. to reiterate the will to establish a strong cooperation among the two parties and increase the level of U.S. LNG imports to the EU.”

From the European perspective, this relationship aims to strengthen its energy market, and ensure security by diversifying its gas supply. This strategy is directly followed by a support from EU Institutions to LNG infrastructure projects in Western Europe, with a commitment of over €638 million.

Although the LNG market is growing strongly in Europe, the level of supply from this source is still low compared to the Russian gas imports. 32% of European petroleum products and 40% of European natural gas products are imported through pipelines from Russia, Europe’s main supplier of energy.

Natural Gas: What is the role of Russia's state-owned company Gazprom?

Gazprom is committed to deliver natural gas across Europe, which is its biggest market. Indeed, the European gas consumption in 2018 reached a record high with more than 530 billion cubic meters (bcm), or 477 million tonnes of oil equivalent consumed. Despite a market of this scale (representing billions of dollars of revenue for the company) a political crisis can occur that can lead to temporarily disruption of natural gas supply. In 2009, a conflict between Ukraine and Russia about the price of gas led to a shortage of supply across Eastern Europe. Therefore, EU dependency on Russian gas is perceived as a threat that has the potential to disrupt the stability of European energy market (Figure 2).

To avoid a similar crisis, new regulation was proposed in 2016 that encouraged regional solidarity by increasing overall gas reserves and further connecting the natural gas networks within the region. In the event of a gas shortage in one member-state, the surrounding states would have the means to fill this deficit, keeping the economy running. These measures are aimed at bringing more resilience to the European gas market, as well as more interconnecting infrastructure between the countries (Figure 3). 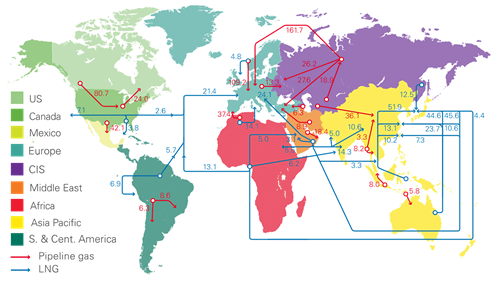 As the nearby Russian Federation can exert a hold over the EU with its natural gas imports, it is imperative for Europe to strive for energy security, as well as ensuring a competitive gas market. Many options are available for the EU.

It is vital to build a strategy around the LNG partnerships between the U.S. and the EU. This could reduce the share of gas imports from a single supplier. However, diversification of suppliers is deemed insufficient due to the large share of Russian gas imports. Therefore, it is key to pursue a second option simultaneously, focused on internal sustainability.

Lastly, the EU should seriously consider the implementation of article 176A of the Lisbon Treaty that consists on upgrading the current gas infrastructure in Europe, and developing a more robust network that could resolve any future gas shortage. These strategies would boost energy security within EU.

Edouard Lotz is a student on ESCP Europe’s MSc in Energy Management (MEM) and Vice President of the School's Energy Society. If you want to pursue a career in the Energy industry and make a real impact in the sector, check out ESCP Europe and its Energy Management programmes.