How Putin Is Turning Russia into the World’s Energy Superpower

In imposing new sanctions on Russia, the US Congress aimed to punish Russia for its alleged meddling in the US elections in 2016. Still, these sanctions were mostly motivated by US self-interest, geopolitics and blatant US efforts to delay if not prevent Russia’s emergence as the world’s energy superpower.

The target of these sanctions as in the previous ones is Russian banks and companies as well as Russian oil and gas projects. However, the most contentious issue could well be the sanctions on pipelines. Key projects such as Nord Stream II and the TurkStream pipelines are at the very heart of the sanctions.

The US has always been opposed to Nord Stream II, which it views as Russia’s attempt to solidify its hold on Europe’s energy supplies (see Map 1). 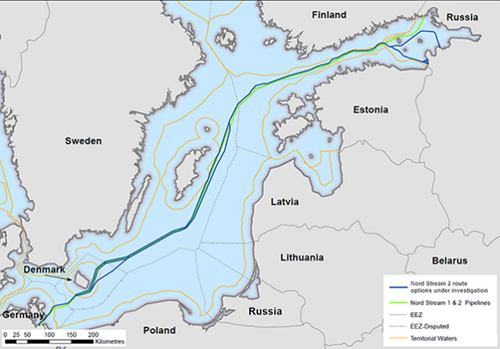 Nord Stream II gas pipeline would enable the Russian gas Giant Gazprom to divert gas supplies to the European Union (EU) via Ukraine into a less controversial route under the Baltic Sea, to Germany. Construction will start in 2018 and will be finished by the end of 2019. When completed, Nord Stream II would deliver up to 110 billion cubic metres a year (bcm/y) of Russian gas supplies to the North-West European gas market.

In fact, US misgivings about the geopolitical implication of Nord Stream II are shared by eight European countries (perhaps instigated by the US) – Poland, Hungary, Lithuania, Latvia, Estonia, the Czech Republic, Slovakia and Romania. They have warned that Nord Stream II would have potentially destabilizing geopolitical consequences, undermine the energy security of Central and Eastern Europe, and detrimentally impact Ukraine.

But the prospective shareholders in the Nord Stream II consortium (including Gazprom, Royal Dutch Shell and OMV) argued that Nord Stream II would enhance Europe’s long-term energy security by providing an alternative gas supply route that avoids the unreliable transit state of Ukraine.

Putin’s plan is to turn Russia into the world’s energy superpower and it is working. The World Bank estimates the total value of Russia's natural resources at $75 trillion. This is equivalent to the current global GDP.

Russia has been building many pipelines to deliver its natural gas to every corner of Eurasia. Other than the Nord Stream II, another prominent pipelines is the TurkStream pipeline which, when completed in December 2019, will deliver 31.5 bcm/y under the Black Sea to Turkish and European consumers (see Map 2). 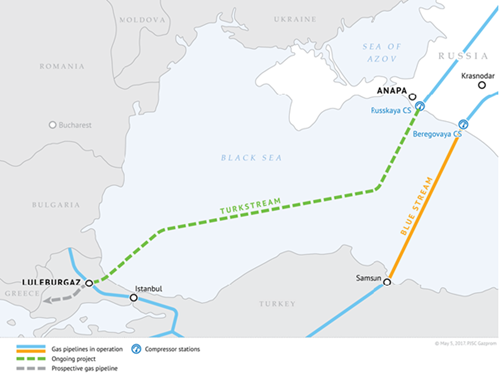 There is also the Power of Siberia gas pipeline which will deliver Russian gas to China (see Map 3). It will start operation by 2019 with the delivery of 38 bcm/y of Russian natural gas, which can be increased to 61bcm/y if Putin decides to cut the shipment of natural gas to Europe in favour of China.

Then, there is India. The delivery of 2.5 million tons of LNG to India by Gazprom (the equivalent of 3.4 bcm of natural gas) will start in 2018. The plans to build a pipeline to India as an extension to Power of Siberia are also under consideration.

And it does not stop there. Russia and Japan are actively discussing construction of a natural gas supply pipeline from Sakhalin (a Russian island in the Pacific Ocean) to Japan. The 1,500 km underwater pipeline will be able to provide Japan with 20 bcm/y of natural gas, which is 18% of Japan’s LNG imports.

Russia currently provides roughly 40% of the total oil and gas consumed in the EU. Germany, which boasts the largest economy in the EU, receives 57% of its natural gas and 35% of its crude oil imports from Russia.

Cultivating this dependency is a conscious move by Russia. Is this just business for Putin? Of course not; geopolitical interests are intertwined.

First, China, Turkey and Russia are discussing ways to conduct their mutual trades using national currencies only, which will exclude the US dollar from these deals. 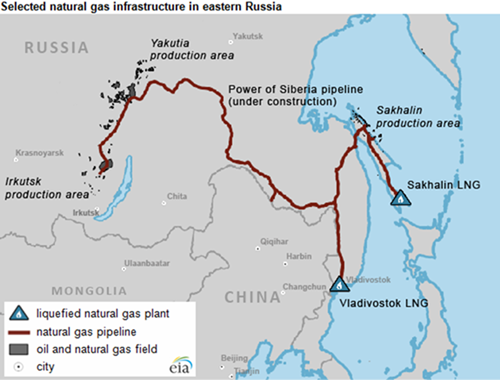 Second, Turkey will become a European energy hub, which will increase the country’s political weight on the continent. But this will happen as a result of energy cooperation with Russia.

Third, the ambitious plans to ship American LNG to Europe could be either delayed or put to rest for a long while.

The reality of the 21st century—as Putin sees it—is that energy is a political instrument. Political alliances and the rise and fall of the international importance of particular countries will change in accordance with the energy supply routes.

Geopolitical Fallout from the Sanctions

The recent US sanctions demonstrate how remote, difficult and protracted the process of normalising US-Russia relations is becoming.

“By imposing new sanctions, the US risks losing global influence and uniting non-Western countries against it," according to Vladimir Lepekhin, a Russian political expert and director of the Eurasian Economic Institute (EEU) think tank.

Energy sales are an important source of revenue, of course, but for Russia they are more than that: they are an instrument of geopolitical power. They give Moscow considerable influence over the countries whose energy needs are met by Russian exports. If Russia intends to retaliate further against the US, its energy supplies, especially those it sends to Europe, may be its best option. A policy of dividing the US and Europe could be Putin’s best bet.

Impact on the Russian Economy

Since the oil price crash in 2014, the Russian economy has been diversifying away from reliance on oil and gas exports. These efforts are starting to bear fruit. The Russian economy can now live forever with an oil price of $40 or less. Also in 2016 agriculture has surpassed the arms industry as Russia’s second largest export sector after oil and gas.

The Russian economy has been growing at an annual rate of 2.5% in the second quarter of 2017, the fastest in almost five years (see Chart 1).

In 2017, the Russian economy with a GDP of $3.938 trillion was ranked as the world’s sixth largest, measured by purchasing power parity (PPP), which the International Monetary Fund (IMF) and the World Bank agree is the best yardstick. Foreign reserves stood at $396.4 bn in August 2016. Moreover, Russia’s debt-to-GDP ratio is one of the lowest in the world amounting in 2016 to 12%.

Russia is now signalling that neither low oil prices nor sanctions will deter it from Arctic drilling. Russia’s oil giant, Rosneft, is getting its drilling activities underway in the Russian Arctic. By so doing, Putin’s Russia is demonstrating that sanctions did not succeed in putting a crimp in Russia’s oil sector.