The oil price has reached a five-month high, with WIT oil futures breaking through the $55 per barrel level for the first time this year at the same time as the benchmark for crude oil volatility drops to 37 volatility points, reaching levels not seen since December 2014. Changes in crude oil price and volatility can be justified in terms of supply fundamentals namely the fall in US oil rigs, the slowdown of crude oil inventory build in the US, and increased concerns regarding the conflict in the Middle East. The recent run up in prices has led to renewed optimism in the energy sector. The main question for traders now is whether the period of bearish prices and increasing volatility is coming to an end.

Disagreement about the future direction of the oil price is emerging as energy traders take positions in the hope of a quick recovery under expectations of tighter global oil balances, while the industry is preparing for an extended period of low prices and cost-cutting. It is therefore important to establish what market measure can be used by market participants on a daily basis to measure uncertainty in the crude oil market. The perceived gauge of risk aversion in the crude oil market can be captured by the the CBOE Crude Oil ETF.  In what follows, we show that the changes in the crude oil VIX can be modelled using GARCH volatility estimates of NYMEX (1 month) WTI futures. The crude oil VIX and GARCH volatility estimates may be considered jointly to improve volatility predictability and to quantify the relative efficiency of the two measures in incorporating new information.

We use data on crude oil WTI front month daily prices to estimate GARCH variances over a sample that encompasses both the pre-crisis period, in which there was a substantial run-up in crude oil prices, and the recent period in which prices have fallen significantly.  The GARCH process is used in finance to model historical variances that are an autoregressive process, so that variances depend linearly on their own past.  Because time series can be well approximated by autoregressive processes, the GARCH process is robust in measuring the changing volatility environment recently observed in the crude oil market.

Fig 1 plots estimated annualized GARCH (1,1)  volatilities and the crude oil VIX (OVX) over the 2007-2015 period. The clear co-movement between the paired daily series may suggest that the two processes are exhibiting commonality in the way they estimate the true underlying volatility.  A unit root test of both series fails to reject non-stationarity in each case, and so we model them jointly in a cointegrated VAR framework with short and long run underlying dynamics. The Gonzalo-Granger price discovery analysis can then be applied to establish which of the two processes is more efficient in revealing the common underlying market conditions. 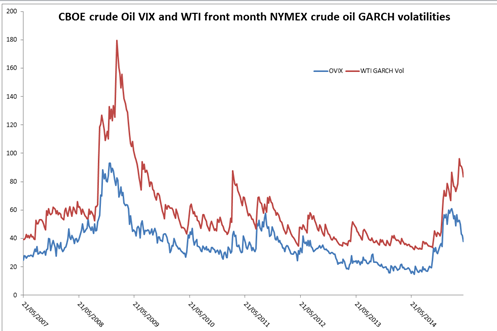 If the two series are measuring the common factor of the true underlying volatility, there is a linear combination of the implied and historical volatilities that is the same across time periods. This linear combination is the cointegration error in the Engle-Granger framework.  Cointegration test results (which can be provided upon request) demonstrate that there is a stationary cointegrating relationship that linearly combines GARCH volatility and the crude oil VIX index. Crude oil volatility dynamics can therefore be represented via a stationary Vector Error Correction Model (VECM) that may be estimated to approximate the future direction of volatility.

Short run dynamics can be used to predict future crude oil VIX changes using GARCH volatilities as is reflected in the estimated significant c1 parameter. This suggests that information on short run oil VIX dynamics can be approximated by the GARCH historical volatility measure.