Could Venezuela Rescue the Oil Price?

With 300.9 billion barrels (bb) of proven oil reserves, Venezuela holds the biggest reserves in the world and also accounts for 92% of Latin America’s reserves. This is 13% bigger than Saudi Arabia’s.  Still, the United States Geological Survey (USGS) estimates that there may be more than 513 bb of extra-heavy crude oil and bitumen deposits in Venezuela’s Orinoco belt region. 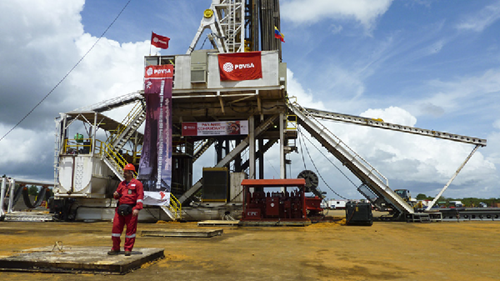 Venezuela, a country that should be one of the wealthiest in the world, remains mired in deepening crisis. Its currency (the bolívar) has virtually collapsed while its economy shrank by 10% in 2016 and annual inflation is poised to exceed 720% in 2017.

In the face of growing public discontent with his presidency, the incumbent president Nicolas Maduro has attempted to hold on to power by cracking down on dissent while pushing to rewrite the constitution.

Venezuela, a founding member of OPEC, benefitted greatly from high oil prices since 2002. Oil revenue accounts for 95% of the country’s export revenue providing the hard currency needed to purchase consumer goods, virtually all of which are imported.

With high oil revenues, the government heavily subsidised the prices of basic staples and provided social services. But government spending has been outpacing the oil revenue since 2010 and the Venezuelan economy started to decline precipitously following the collapse of worldwide oil prices in 2014.

The drop in oil prices was only part of the problem for the Venezuela’s state-owned oil company, Petróleos de Venezuela, S.A. (PDVSA).The country’s oil production has been consistently declining over the past decade due to lack of investments. The source of PDVSA’s troubles is having to spend most of its funds on financing government expenditure including spending on social programmes with hardly any left for investment. In the face of capital flight and dwindling foreign exchange reserves, the Maduro administration finally allowed a significant devaluation of the bolívar in May 2017.

An Oil Industry on the Brink of Collapse

A more promising oil sector, one that attracts oil majors, could raise Venezuela’s oil production to 4 mbd within this decade.

Venezuela’s oil industry is on the brink of collapse. It is badly in need of huge injection of investments and advanced oil technology to significantly raise its oil production. However, few believe Venezuela could attract the investments needed without some rapprochement with the United States.

Even allowing for OPEC’s production cuts, Venezuela is currently producing less than 60% of its production potential.

Venezuela’s already-decrepit oil industry is deteriorating by the day, and an outright implosion is no longer out of the question.

This meltdown is taking a toll on Venezuela’s oil production.  As of April this year, oil production stood at 1.956 mbd, down 19% from last year and output continues to trend downward. Venezuela is expected to lose another 200,000 to 300,000 barrels a day (b/d) this year (see Table 1).

There is also a problem in downstream. Plagued by underinvestment, three of Venezuela’s four refineries have been running well below capacity because of lack of spare parts and maintenance according to Reuters. Falling production at refineries means more gasoline imports, putting a tighter squeeze on state finances.

And with cash drying up, PDVSA is also struggling to import lighter fuels that are necessary to blend with the country’s extra-heavy oil. Meanwhile, because of obligations to creditors, PDVSA is sending crude abroad, leaving little for domestic refining.

The worst-case scenario for Venezuela’s oil industry is a sudden disruption of production if the country implodes. There is no way of knowing if this will happen, but analysts are growing increasingly concerned about the possibility.

And whilst Venezuela has huge reserves underneath it, it has one of the highest costs of production among OPEC’s members. It cost Venezuela almost $28 to produce a barrel of oil in 2016. Venezuela needs an oil price of $105/barrel to balance its budget (see Chart 1).

Venezuela has only $10.5 bn in foreign reserves left for the rest of the year, it owes about $7.2 bb in outstanding debt payments. In a January 31 report, the US Ratings Agency Fitch said that PDVSA faces a challenging year and that default for the state-owned oil company is probable—in part, due to moderate oil price increase, lower production and a weak liquidity position.

Many of the service companies such as Schlumberger Ltd. and Halliburton won’t do business with Venezuela or have scaled back their operations, partly because of insufficient payments received in recent times. 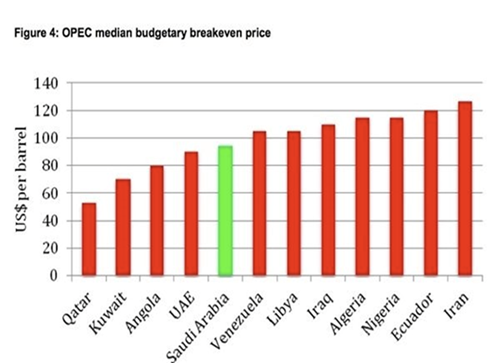 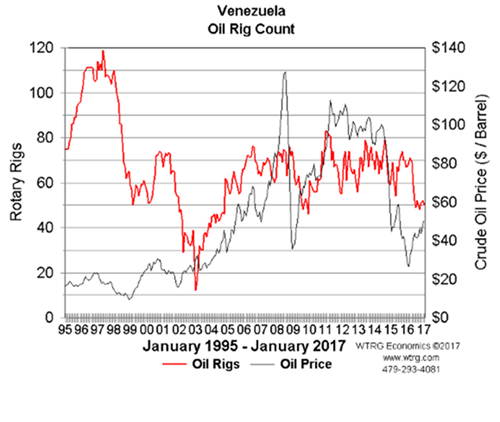 How Venezuela Ruined Its Oil Industry

There are primarily two related causes that have resulted in the steep decline of Venezuela's oil production. The first is the removal of expertise required to develop the country's extra-heavy oil. This started with the firing of PDVSA employees in 2003 and continued with pushing international expertise out of the country in 2007.

The second is that the late Hugo Chávez government failed to appreciate the level of capital expenditures required to continue developing the country's oil. When oil prices were high, Chávez spent billions of dollars funding extensive social programmes for his people. But he failed to reinvest adequately in this capital-intensive industry.

While the late Chavez had his heart in the right place, his government lacked the management skills to run an oil industry. No one can argue against a country using its oil reserves to benefit its citizens. But this could have been done responsibly. The problem with Venezuela's approach was that it extracted too much from the industry, which undermined its ability to continue to expand production.

In a desperate bid to survive its economic meltdown, Venezuela is lobbying other OPEC members to agree to steeper oil production cuts, a move that would likely lead to higher oil prices.

Venezuelan officials have reached out to their counterparts in Iran, Russia and Saudi Arabia to press them on more collective action, according to Argus Media. If there was enough interest, the next step would be an extraordinary meeting of OPEC’s oil ministers to weigh the option of cutting production deeper.

However, the urgency for higher prices is more acute now for Venezuela. There is no way out of the downward economic spiral for Venezuela in the short run without significantly higher oil prices. Venezuelan officials fear that PDVSA might default within five months if oil prices remain stuck below $50/b in the second half 2017.

Still, it is doubtful as to whether Saudi Arabia and Russia will be willing or able to persuade other OPEC and non-OPEC oil producers respectively to agree deeper cuts. Russia for one is now saying that its economy could live forever with an oil price of $40/barrel or less. This raises the question as to how long will Russia continue to abide by the production cuts let alone accepting deeper cuts.

The Added Threat of US Sanctions against Venezuela

And to complicate matters further, the U.S. government warned about “swift economic actions” against Venezuela if it moves forward with the July 30 vote to form a constituent assembly that President Maduro has called for. The assembly would be able to rewrite the constitution and augment Maduro's powers.

The United States could target PDVSA in an effort to cut into Venezuela’s oil revenues by imposing a blanket ban on Venezuelan oil imports and blocking PDVSA from dealings in the US.

Venezuela’s roughly 2 mbd of oil production hangs in the balance, which, if lost as a result of a production disruption or sanctions, would certainly send oil prices sharply up.

Such sanctions would increase the likelihood that Venezuela would default. It would also be felt in the US energy sector. Citgo, the US-based refiner and supplier owned by PDVSA, has about 6,000 stations in the US, employing 46,000 people.

At 795,000 b/d, Venezuela was the biggest foreign provider of crude oil to the US Gulf Coast in April.  If the United States imposes a ban on crude oil imports from Venezuela, prices for the heavy sour crude grades like the one Venezuela is supplying to the US would increase and refiners on the US Gulf coast might pay a price.

The US Treasury imposed on the 26th of July 2017 sanctions against 13 officials of the Government of Venezuela, including some top managers of PDVSA. The sanctions were imposed ahead of a planned controversial vote on July 30.

Sanctions on Venezuela would have a completely different outcome from those imposed against Russia and Iran. While sanctions on Russia have hardly had an effect on its oil production or the global oil market, those against Iran led to a reduction in its oil production and exports and supported oil prices but the Iranian oil industry continued to operate.

There are several important differences between the situation in Venezuela and those in Iran and Russia.

Venezuela was a pillar of America’s energy security last century, not only as a reliable supplier, but more critically as a shortstop for bullish global pressure on oil prices.

The late Venezuelan president Chávez’s ascent to power in 1999 drastically changed that.

Historically, Venezuela has been one of the most important suppliers of foreign oil to the United States, but that importance has diminished over time. One of the fastest growing destinations of Venezuelan crude oil exports has been China.

Though Venezuela has repeatedly threatened to cut off its oil exports to the United States, analysts say the two countries are mutually dependent. However, in order to wholly replace the US market – home to refineries that can refine Venezuela’s heavy crude oil into a marketable product – Venezuela must expand its domestic capacity to refine heavy oil as well as transport it to alternative markets where there are customized refineries.

PDVSA also wholly owns five refineries in the United States and partly owns four others, either through partnerships with US companies or through PDVSA’s US subsidiary, CITGO.

Events in Venezuela continue to unfold, but it's hard to imagine that the oil industry there can recover without significant investments.

But while a regime change will certainly lead to violent swings in oil prices (mostly higher), even less volatile events could have a significant impact on the price of crude with the price rising by an estimated $6-$8 a barrel. It may be just the opportunity OPEC needs to exit its current strategy. And should the situation there continue to deteriorate, it will further impact adversely on the country's oil production and push world oil prices higher.

Still, the United States should stop dictating to Venezuela and threatening it with sanctions and should, instead, undertake to never try to undermine the Venezuelan regime. With the current instability in the Middle East, Venezuela could still prove to be the best placed in the world to significantly enhance US energy security in the long term.