In the wake of the downing of Malaysia Airline flight MH17 over eastern Ukraine on 17 of July 2014, Russia has been pelleted with adverse court rulings and judicial decisions. In sequence we have:

Of lesser economic importance but still in the spirit of the day, we also have the following cases :

The sanctions will need some time to take effect. They affect new technology transfers or export of listed items for use in deep water oil exploration and production, Arctic oil exploration and production, and shale oil projects. This means it does not affect existing projects, and tellingly it does not apply to natural gas - why would Europe want to affect its own gas supplies ? The problem lies in the definition and interpretation of these restrictions:

The IOCs will doubtless require some guidance from their countries' agencies on how to understand these sanctions. There is no doubt that, if applied, these sanctions will hinder Russian companies ability to develop new deposits. No Russian company has ever acted as the developer and operator of offshore deposits. Regarding shale hydrocarbons, the picture for gas and oil is contrasted. Until 2012, shale gas was derided as being expensive and environmentally damaging. Today, it is not a priority in Russia as it possess significant conventional reserves. Shale oil holds promise in Western Siberia where the Bazhenov is thought to be the world's largest.[4]

International Oil Companies do not have it easy these days. In the face of assertive National Oil Companies globally, they are faced with fewer investment opportunities. In Russia, they are specifically invited to develop technically challenging reserves. On the offshore, foreign investors can only enter into JVs with Russian state-owned partners (i.e. Rosneft or Gazprom), and their share should be below 50%.

Every host country has its unique challenges for international oil companies, be it graft, political instability, insurgency or war, local content requirements, or mercurial petroleum laws. However, many of the complications encountered by foreign oil companies are Russia-specific. Under Russian subsoil law the information with respect to oil and gas reserves and their production in the Russian Federation as a whole, in any particular Russian region, or in "Federally significant deposit" is treated as a state secret.[5] Fortunately, this does not prevent publicly quoted Russian companies from having their reserves independently appraised. A 2008 amendment of this law states that the government can block the ownership of such federal deposits by foreign companies or foreign-controlled Russian companies. Finally, the license holders for such deposits must in effect be state-controlled oil and gas companies.

Also, until recently, Gazprom had a monopoly on lucrative natural gas exports. Since December 2013 Rosneft and Novatek, an independent Russian gas producer, can also export natural gas as LNG. However, both are targeted by sanctions, despite being BP and Total, respectively, as nearly 20% shareholders. Gazprom in the past bore the brunt of Russo-Ukrainian gas spats. This time, ironically, it may stand to benefit from its domestic competitors' misfortunates as it is not directly targeted by sanctions and it remains in charge of Russia's export pipelines.

All the oil majors have some projects in Russia in one way or another in the upstream and on LNG liquefaction terminals. However, BP is in a class of its own in terms of exposure to Russia in general, to Rosneft in particular, and hence to its indirect exposure to the Yukos case. While the IOCs can be forgiven for not having predicted Russia's annexation of Crimea, they cannot claim they were unaware of the risks of doing business with a Rosneft. The company's oil-equivalent reserves grew by a factor of 3.8 to 12.7 bln bbl thanks to the "acquisition" in 2004 of Yukos' assets.[6]  By comparison, BP's 2013 oil-equivalent reserves stood at 9.8 bln bbl.[7] 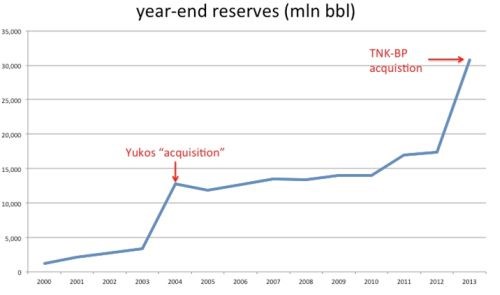 In Russia, Gazprom is mainly responsible for gas fields, and Rosneft for oil fields. Because of its oil focus, Rosneft will be more affected by the sanctions. Furthermore, the US introduced sanctions preventing Rosneft, independent gas producer Novatek and named banks from raising long-term financing on capital markets.

Russia's oil sector would probably have no trouble sidestepping the financial leg of the sanctions with the help of Chinese capital. However China's oil companies will not be able to assist with the technological leg. For one, China's offshore petroleum technology lags behind the Western oil companies in deepwater offshore technology. Secondly, according to the Russian legislation (Subsoil Law 1992), only state-owned (more than 50% of the shares are owned by the state) oil and gas companies are allowed to participate in the development of offshore fields. This is inconsistent with Chinese firms' practices to take majority stakes and operational control of the projects they finance. The technology transfer ban, if it is properly enforced by the member states, will have a biting effect on Russia's plans to develop its Far East and Artic blocs. No Russian company has ever developed offshore oil or gas fields on its own, let alone ones in the Arctic sea, where drifting icebergs constitute a particular challenge.

This is quite an evolution from the initial round of sanctions against Russian individuals, which their targets derided as toothless.

BP's case is an especially good example of the perils for Western interests from the new sanctions. On 29 July 2014, the day sanctions were announced, BP published Q2 2014 profits 34% higher than for the same period in 2013, yet its stock fell 3.3%. It is one inconvenience for some oil companies not to be able to add to their existing investments in Russia or to transfer technology to them. It is another matter altogether if Yukos' lawyers can go after the company that accounts for 30% of its oil-equivalent hydrocarbon production, and 47% of its gross replacement cost profit.[8] Rosneft's shares fell 17% over July 2014.

After Deepwater Horizon, BP sold assets to pay its liabilities to become a "simpler company"[9]. If "simpler" means more focused on one country, it certainly achieved its aim. In March 2013, it entered into its landmark agreement by selling its 50% share in TNK-BP to Rosneft in exchange for nearly 20% of the Russian state oil company. The two companies' stated aim was to jointly explore and develop Russia's wide Arctic offshore. Robert Dudley, BP's CEO certainly knows something about the risks of doing business in and with Russia. When he headed BP Russia's operations in 2008 he had to go underground following intimidation from his business partners in TNK-BP. After he left Russia for his safety, he was in effect locked out of the country by visa restrictions. More than his oil industry peers, the writing about doing business in Russia was on the wall back then, but Mr. Dudley must have hoped his personal relationship with Rosneft CEO Igor Sechin would insulate BP. Now that this close Putin associate is personally targeted for sanctions, this association is more of a liability, and the "business as usual" stance of BP and other oil industry executives looks increasingly untenable.[10]

[6] Rosneft's Long Term debt also grew from $1.8 bln to $9 bln, implicitly pricing the barrel in the ground at under $1.

[7] Developed plus undeveloped reserves of BP subsidiaries, plus BP equity in other entities,

[8] Replacement cost profit is an accounting practice for reporting profits in the oil industry.