Algeria Attempts To Get Out of a Limbo

The incomprehensible relative political stability in Algeria is largely attributed to the psychological trauma suffered by the people during the so-called Black Decade, the civil war that raged between 1991 and 2002 with Islamist fundamentalists challenging the regime. 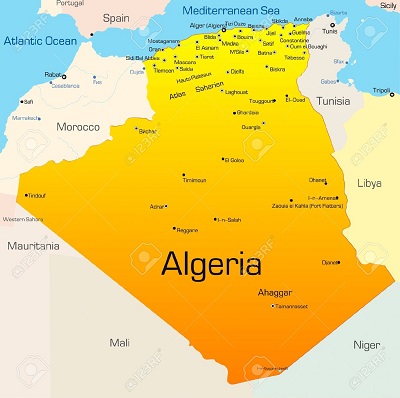 Today, the aging and basically unhealthy 79-year-old president Abdelaziz Bouteflika who heads the National Liberation Front (FLN) is offering a semblance of 'stability and continuity' (the ultimate and most appealing of the FLN slogans) and thus capitalizes on the rejection of violence by 40 million people of the weary nation.

The vaccination of the Black Decade made Algerians immune to the call of the Arab Spring sirens, and set up a barrier for the Islamic State recruiters. While one of the most Westernized nations of North Africa, Tunisia, has contributed from 6,000 to 7000 militants to join and fight alongside Caliphate-brainwashed IS radicals and similar extremist groupings in Syraq (Syria and Iraq), Algeria paid a token toll of only 200 recruits. The difference is striking, but justifiable.

It would be appropriate to quote Jenny Gustafsson’s widely reprinted article titled “No Daesh in Algeria: What’s their secret?” who manages to hit the nail on the head with proper analysis.

The first and foremost argument by Gustafsson is rooted in Algeria's own legacy of internal conflict. “The experience of living with extremism remains fresh in the country's collective memory and works as a form of psychological deterrent,” the expert rightfully observes. To prove the point, there have been few recurrences if any among the former fighters who after being granted amnesty have reintegrated into their original communities, thus starting their lives anew and probably repenting on their violent past.

No less weighty is the argument that Algerian regime does not economize on maintaining and building up its security forces that serve as the bulwark against the many threats coming from the porous borders (stretching along uninhabited deserts) with the ”unhinged” Mali and the failed state of Libya. The figures provided by Gustafsson are convincing: France with a population of 65 million (25 million more than Algeria) keeps 143,000-strong security forces while the North African country counts more than 200,000.

The counter-argument that the sheer size is no guarantee against failure is refuted by the track record of accomplishments. On 3 October, within the framework of the on-going anti-terrorism operations Algerian security forces have found a cache containing six heavy machine guns, more than eight rifles, four pistols and 14 semi-automatic rifles. It has been reported that in the first five months of this year “73 terrorists” had been killed and 111 arrested.

The third a most powerful suggestion made by Jenny Gustafsson is focused on Dawa Salafiya, or “quiet Salafism”, a mild version of Islam that shies away from politics. In 2013, a national union of imams was set up for the purpose of serving as a “bulwark against imported religious ideas”, meaning the belligerent fundamentalism of the IS-type that proclaims life “by the sword”, annihilation of all the infidels, and the eventual triumph of the restored Caliphate with its capital nowhere else but in the Saudi holy city of Mecca.

Once again, the bitter experience with the internal feud provoked and elevated to a bloodbath by Islamic radicals prevents Algerians from embracing the imported versions of fundamentalism.

How does the current “acceptable” status quo translate into SWOT perspective of Algeria as one of the main providers of hydrocarbon commodities? In fact, it is a mixture of remaining uncertainties over the looming transition period after the inevitable change of guard and apparent certainties about the dire state of the energy sector clutched in the grips of raving corruption, bureaucratic inefficiency, and regulation in the spirit of “resource nationalism”.

This is disgraceful for both the national economy and foreign investors alike. Since Algeria is one of the top three oil producers in Africa, ranks eighth for its natural gas resources (second in Africa after Nigeria), and is estimated to hold the third-largest amount of shale gas resources in the world, it is shame the energy bonanza does not provide for lavish revenues and high standard of living.

Algeria’s energy major, Sonatrach has originally planned to surge oil production from about 140 Mtoe in 2013 to 225 Mtoe in the time span of five years. The company intended to pour some US$80bn into the ambitious growth programme. Then came the global oil price meltdown, and now the company is forced to revise the investment volumes downward.

However, Sonatrach sounds optimistic about the future claiming it would still go on with exploration works on 125 new wells drilled every year. The company is also keen to expand its transmission network and rebalance its focus on less mature fields.

The oil sector of Algeria has been in decline for a decade. It sours forecasts. The decision by Sonatrach in January 2016 to put on hold shale gas exploration in the experimental fields in Ain Salah added fuel to speculations that the trend would remain bearish. Local experts explained the delay: extracting shale gas of Ain Salah would make business sense only when crude oil prices on global markets reach US $80/bbl. Until then, it is a waste of money.

Moreover, to raise the needed US$80bn in investment requires attracting foreign capital. This is not a given. Algeria is viewed in the context of the turbulent developments in the whole MENA region. The current “political rivalries, conflicting ideologies and opposing interests and ambitions that have conspired to keep the region divided, unstable and weak” (as experts define it) serve as a formidable deterrent for foreign investors.

In Algeria, to rub salt into the wounds, there is also the issue of production-sharing contracts, not very favourable to ’outsiders’, customs delays, archaic banking systems, pervasive red tape (as Shakespeare would have termed it, “the insolence of office”) and widespread corruption. In fact, Algeria is considered to be among the world’s 10 most corrupt nations.

Economy is not stagnating but losing steam. GDP growth totalled 3.7% in 2015 but is due to slow down to 1.9%. This is reflected in the unemployment level of more than 20% with young people, as usual, affected the most. On top of it, the present state of affairs in housing, healthcare, education is far from satisfactory. For the first time in the past 10 years, the government is weighting the benefits/dangers of pushing up fuel and electricity prices. It would hardly bode well with the populace but this is a tough necessity.

To meet the challenges of “lean years”, the government is proposing a grand vision called New Economic Growth Model. It is rooted in the natural desire to get rid of the overdependence on the production and exports of oil and gas (forms one-third of GDP and 95% of exports) and create new sectors of revenue generation.

These plans are bold and ambitious. The government pins hopes on attracting enough investment to accelerate the Programme for the Development of Renewable Energy, adopted in 2015. If everything goes well, it is predicted that Algeria would generate 15% of electricity from renewable sources by 2025-2030. As a result, consumption of natural gas will naturally shrink. Premiums are already being granted for electricity produced from renewables.

According to a detailed model of energy transition, by 2030, the renewables will account for 27% of Algeria’s electricity consumption. It has been reported that the bulk will constitute of solar PV (13.6 GW), followed by wind power (5 GW), solar CSP (2 GW), biomass (1 GW), CHP (0.4 GW) and geothermal (15 MW).

In theory, the switch to the renewables and efforts aimed at energy efficiency could free (save) some 300 bcm of gas, which would increase to the country’s export potential.

Moreover, Algeria might be blessed with a new hybrid energy model, combining photovoltaic, solar thermal energy and flared gas, as professed by Minister of Energy Noureddine Boutrafa. Eventually, Algeria might not only ensure a balanced and sustainable growth of its economy but also become the number one purveyor of solar energy-based power to Europe and Africa.

Once again, this scenario is plausible provided foreign investors have trust and confidence in making their bets on Algeria’s bright future. To be fair, the government is trying hard to dispel the negative image. Recently, a new leadership of a state anti-corruption body, the Organe national de prevention et de lutte contre la corruption (ONPLC), has been appointed by presidential decree.

Yet, the history of this institution is remarkably deplorable. Set up in 2006, it waited for four years for presidency to appoint its seven members. Then, in 2015 their mandates expired, and another inexplicable pause happened that lasted for months. This mistreatment led to belief that the authorities do not consider fighting corruption as either urgency or a priority.

Ultimately, the existing authoritarian and patronage-based political system is a mismatch with the energy riches of the country and the aspiration of its people to live decent and comfortable lives. Braving all these odds, the ruling elites when not servicing their own interests are desperately trying to put the country on the right track to sustainable growth and prosperity. This is a mammoth challenge.